In Canto 4, Virgil guides Dante through the first circle of Hell, known as “Limbo”. (This is to be differentiated from Purgatory, which we’ll get to later.) One of the highlights is the Seven Sided Castle, home to the VIRTUOUS PAGANS. The sides are symbolic of the “seven moral and speculative virtues”, i.e., Prudence, Justice, Fortitude, Temperance, Intellect, Science, and Knowledge.

Foremost among the VPs are the four greatest pagan poets (other the Virgil), Homer, Horace, Ovid and Lucan.  Also on the scene are Aeneas, Caesar, Saladin, Aristotle, Plato, Orpheus, Cicero, Avicenna, and Averroës, to count the most recognizable.

This Canto is exemplary of what I find most alienating about Christianity: Its practitioner’s assumption that they and only they have lucked onto the one true cosmology and that all other beliefs lead to Hell. So impolite. Rude, even. And arrogant, entitled, proud, complacent, etc, etc. 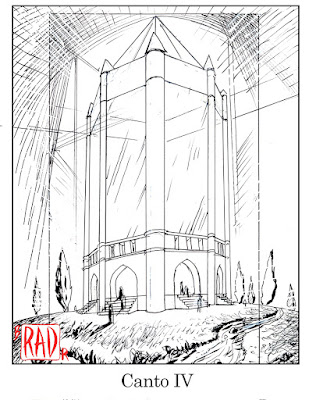