Dante's Inferno, Canto 2: “But the PILGRIM begins to waver; he expresses to Virgil his misgivings about his ability to undertake the journey proposed by Virgil. His predecessors have been Aeneas and Saint Paul, and he feels unworthy to take his place in their company. But Virgil rebukes his cowardice and relates the  main of events that led him to come to Dante. The Virgin Mary took pity on the Pilgrim in his despair and instructed Saint Lucia to aid him. The Saint turned to Beatrice because of Dante’s great love for her, and Beatrice in turn went down to Hell, into Limbo and asked Virgil to guide her friend until that time when she herself would become his guide.”

I had an aversion to drawing Dante and Virgil, minimizing them or avoiding them altogether until mid-way through “Inferno”. This left me with nothing left to draw but depicting Dante’s angelic attractors, Mary, St. Lucia and Beatrice. Since the goad driving Dante on his quest is Eros, I chose to play that aspect up instead of pretending chastity. 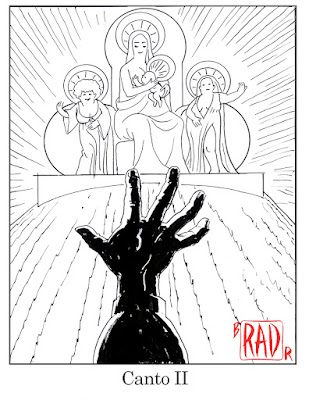