“Susan Hayward (born Edythe Marrenner; June 30, 1917 – March 14, 1975) was an American actress and model. She was best known for her film portrayals of women that were based on true stories.

“…Hayward's doctor found a lung tumor in March 1972 that metastasized, and after a seizure in April 1973, she was diagnosed with brain cancer.[50] On March 14, 1975, she suffered a seizure in her Beverly Hills home and died at the age of 57.[51] A funeral service was held on March 16 at Our Lady of Perpetual Help Roman Catholic Church in Carrollton, Georgia. Hayward's body was buried in the church's cemetery.[52]

Theories about the radioactive fallout from atmospheric atomic bomb tests[53] surround the making of The Conqueror in St. George, Utah. Several production members including Hayward, John Wayne, Agnes Moorehead, Pedro Armendáriz (who committed suicide), and director Dick Powell later succumbed to cancer and cancer-related illnesses.[54] As ascertained by People magazine in 1980, out of a cast and crew totaling 220 people, 91 of them developed some form of cancer, and 46 had died of the disease.[55]“ (Wikipedia)

John F. Callahan (from whom I inherited and recently unearthed this set of 18 8” x 10”, double-sided, hole-punched collectable movie-star-publicity-swag items of which this is #16 in a series of posts there upon) also died of cancer (prostate cancer, metastasized to his skeletal system). John died on February 18, 2013. 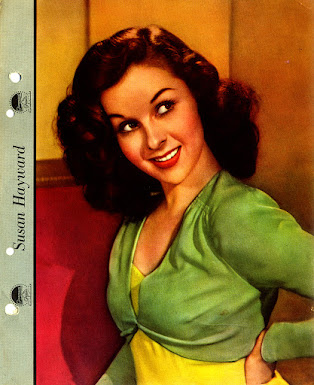 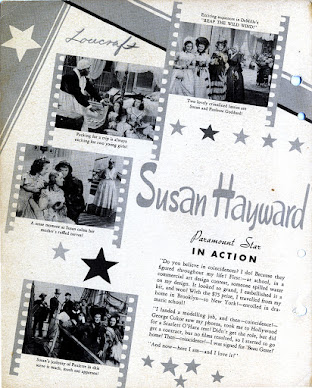