Y’all are looking at a 8” x 10”, double-sided, hole-punched collectable movie-star-publicity-swag item (number 14 in a set of 18 that I inherited, and recently unearthed, from my late husband, John F. Callahan… only 4 more to go!).

There. Got that out of the way.

So… Robert Cummings. I’ve seen him in 4 movies I’ve loved or liked: “Saboteur”,  “Dial M For Murder” (both by my top 10 director, Alfred Hitchcock), “Kings Row” and “The Devil and Miss Jones”. This doesn’t mean I like Mr Cummings as an actor or a personality; I find him rather bland and unintersting, vaguely pretty, with no particular inner life.

This quality tabula-rasa quality worked surprisingly well in the Hitchcock movies (Hitchcock specialized in “Blank Slate” audience identification figures), was harmful in “Kings Row” (given that his character was a pioneering psychoanalyst, an actor who could communicate a conflicted, complex inner life would have been beneficial).To be honest, I don’t even remember him from “The Devil…” 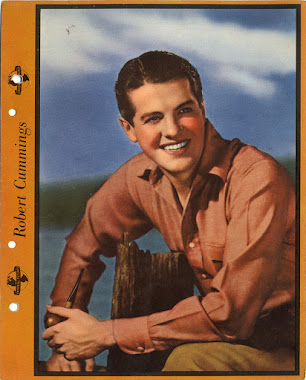 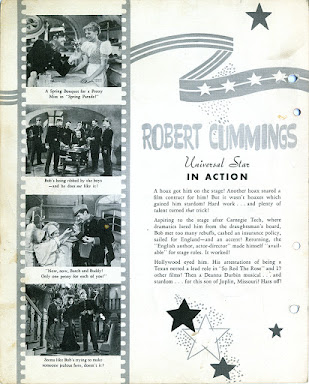 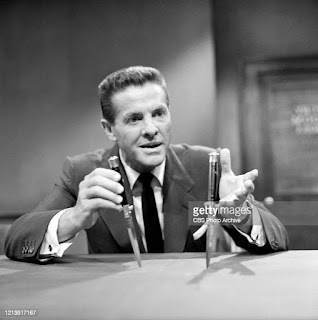