I inherited this two-sided, hole-punched collectable movie-star-publicity-swag items from my late husband, John Callahan. “Dorothy Lamour” is number 8 out of 18 similar items.

Dorothy was a popular singer, having hits with various movie songs. “Moonlight and Shadows” (“The Jungle Princess”), “The Moon Over Manakoora” (“The Hurricane”) among them. In other words, she could qualify as a “Diva”, of the sort my late husband, John F. Callahan followed/admired/and avidly discussed with fellow diva queens.

To my knowledge, “Diva” Lamour never made it into John’s Hall of Fame. I don’t recall seeing any of her albums or CDs in John’s extensive collection. John’s top 3 were Judy Garland, Barbara Streisand and Grace Slick, second tier being Aretha Franklin, Janis Joplin, Whitney Houston, Ethel Merman, Peggy Lee, and Donna Summers. There was a third and 4th tier, but space and memory do not allow me to list them. 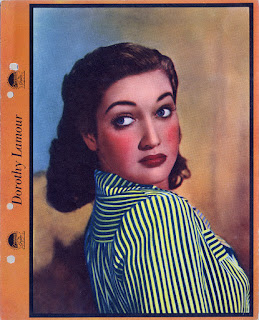 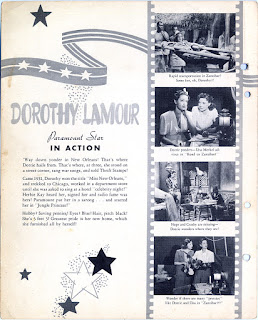 Just for fun, here’s a photo of John and I at the Christopher Street West Gay Pride Parade in 1990. We were part of the Act Up LA contingent. I’m the center-right guy holding 2 crosses; John is marching at my side, camera left. 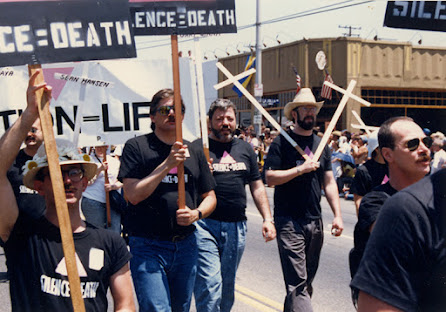