Don Ameche, one of the second-tier stars of Hollywood’s Golden Age, who (like Ralph Bellamy and Basil Rathbone) who never got the girl.

Except for the original “Heaven Can Wait”, directed by Ernst Lubitsch (1943): “An old roue’ arrives in Hades to review his life with Satan, who will rule on his eligibility to enter the Underworld.” (IMDb).

What does this have to do with my late husband, John F. Callahan. from whom I inherited the set of 18 double-sided, hole-punched collectable movie-star-publicity-swag items about which this is #7 in the series of blogs pertaining there-to?

Not much except that, during one of his daughter Lisa’s periodic visits I decided to raise her cinematic consciousness by screening “Laura” (directed by Otto Preminger, starring Dana Andrews and Gene Tierney, Ameche’s “Heaven” co-star) and “Little Shop Around The Corner” (directed by “Heaven” helmer Ernst Lubitsch.) As I recall, during this visit (circa 1994) I was in my early 30’s, she in her early 20’s. I was gratified that she got emotionally involved with both end even cried at the climax of one of them (I forget which). 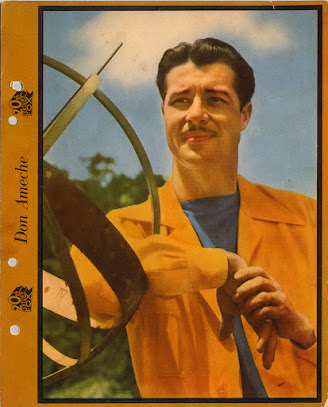 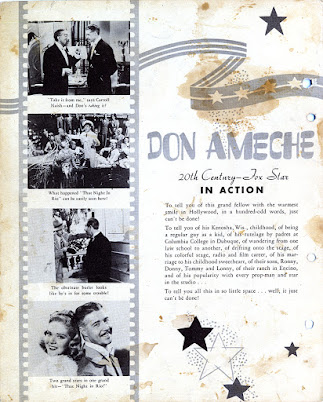