I inherited a set of 1940’s Movie Star Portraits from my late husband, John Callahan. Actually, I lied when I reported (in the previous post, “Alice Fay and John Callahan”) that John told me he collected these cards in his adolescence, back in the mid/late 50’s. True, he was born in 1946, but he told me nothing about how he came to possess the 18 cards from this series. Perhaps HE inherited them from one of his older relatives. I can’t imagine that John who Anna Neagle was when he a youth, much less enough of a fan to acquire memorabilia about her.

The movie being hyped on the back of this collectable 8 x 10” card is “Sunny” (1941): “The beautiful Anna Neagle stars as a circus performer who falls in love with a rich car dealer’s son, against her family’s wishes. Features some spirited dance numbers with Roy Bolger.” (IMDb).

Ray Bolger played “The Scarecrow” in “The Wizard of Oz” (released 2 years earlier).

I’m assuming this card was released around the same time as “Sunny”, in 1941. 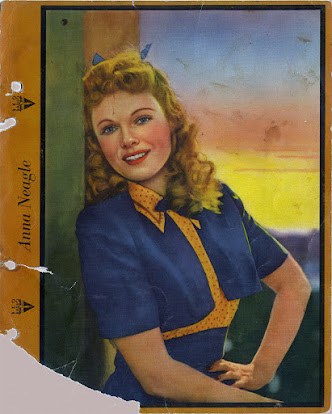 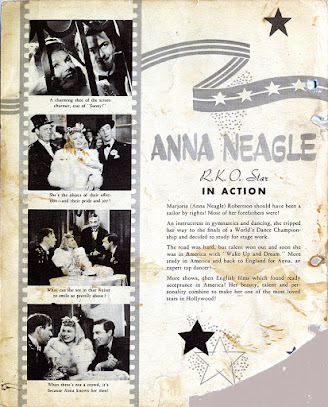