One of my fantasies, as a comics-phile, had always been to see Al Williamson ink Gene Colan’s pencils. I mean the Al Williamson of the late 60’s to early 80’s who drew the ‘Secret Agent Corrigan’ and ‘Star Wars’ syndicated strips. I didn’t realize that my dream pairing had actually occurred, in the early ’00’s, in issue #4 of the Epic/Marvel Comics mini-series, “Clive Barker’s: The Harrowers”, (among other places).

This page showed up on the Heritage Auction site in early 2012. I bid on it, thinking it was a rarity, and won, only to see a plethora of other Colan/Williamson collaborations become available over the following weeks and months.

I should have looked more closely before I bid; frankly, I’m not wild about the ink work on this page. This is not the work of the slick inking machine that I remembered from my youth. In fact, it seems rather crude. I’m thinking of Frank Springer, only with more pen work. This is fine, I suppose; I own 3 Springer originals. It’s just not what I wanted from Al Williamson. All right, fan boy, get over it and look at it for what it IS, not dismiss it for not measuring up to expectations.

The whole thing has a rushed quality. From what I’ve just read on-line, Williamson was trying to communicate the energy of Colan’s pencils, but the subtlety and nuance is lost. In panel 1, the only inking I like is done on the twin’s two right-most faces, and on the frame-right man’s right-most hand. But why did W. cross-hatch (sort of) the shadow area instead of just slapping down a solid black with the brush? You know, to make it pop, setting into the foreground so it would make a proper frame along with the close-up head in the frame left?

In general terms, the pen line width is fairly dead. Though there’s pretty good thick/thin action, there’s very little attention paid to using line width to suggest depth, or create emphasis. I’m thinking specifically of the lines under the top eye-lids. It’s a drawing 101 thing; put a heavier line  under that facial feature to draw attention to the eyes, one of the most important features of the face. On this page, W. does this rarely.

Another truism (I learned this on my first portfolio review at San Diego Con 1983) don’t use squiggle lines for cross-hatching or feathering purposes.  On this page, W is doing it all over the place, leading to a messy look. It may seem self-contradictory to those following my ongoing essays: Recently I praised Caniff and Bernet for their glorious spontaneity, their muscular crudeness, but I’m chastising Williamson for the same. I can only say that there’s a difference between muscular crudeness and sloppiness. I’m not sure what it is, but (like the Supreme Court justices ruling on Pornography in the early 70’s) I know it when I see it. Or maybe I don’t. Perhaps, as I conjectured earlier, I’m letting me expectations and preconceptions blind me to seeing valid work on its own terms. 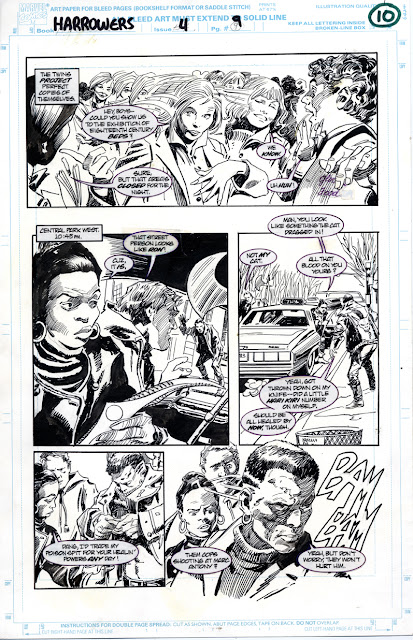 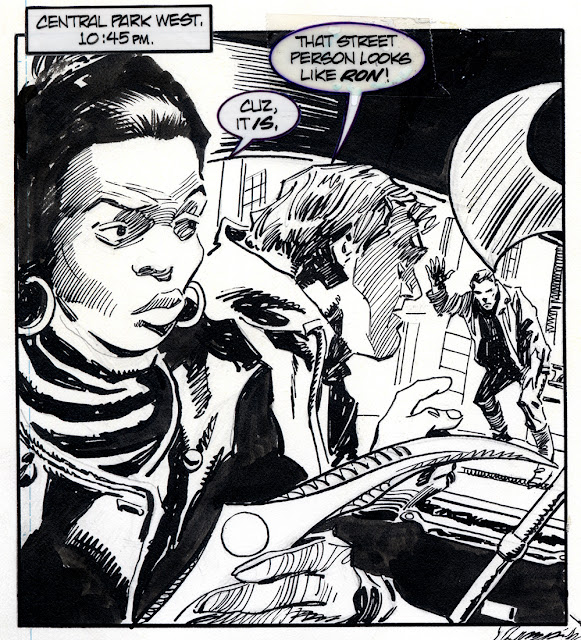 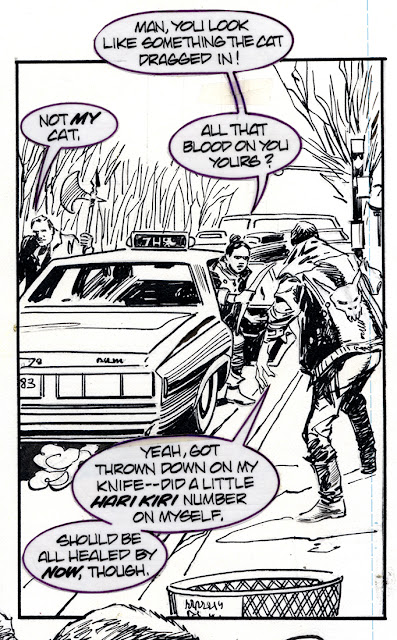 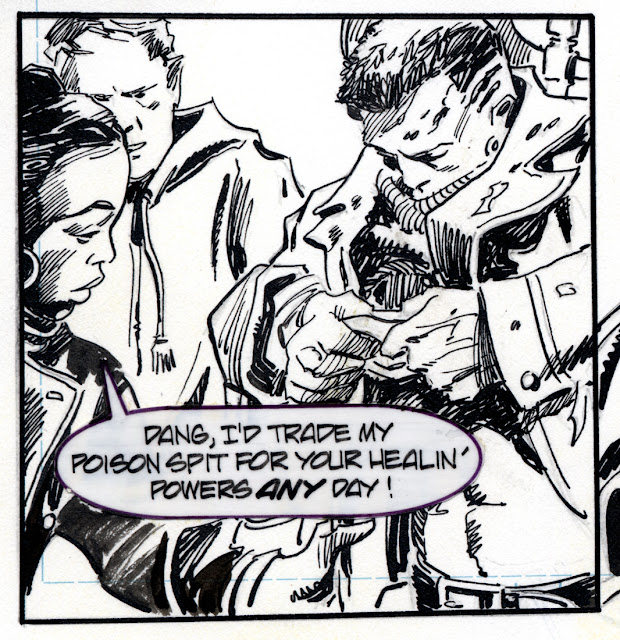 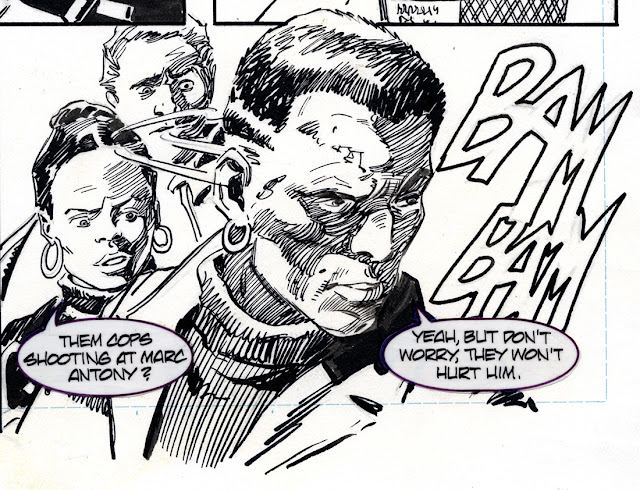 This is the second page of Gene Colan pencil original art that I own.

“Vigilante (Balance)” is written in the upper margin, along with the number “5”. I have run across two other original pencil pages that appear to be from the same abortive project. I say, “abortive” because it’s not in any of Colan’s check-lists and doesn’t appear in Wikipedia, DC Comics Fandom or any of the other likely spots. If you have more information, please share it with me.

I appreciate this page for its cinematic qualities; it would serve admirably and a live action storyboard, and would only need some aspect-ratio conforming and a few added poses to serve as an animation board. Actually, the overall page layout is somewhat tame for Colan, heightening the cinematic effect. HIs compositions, both in each panel, and the page of the whole, seems focused on “telling the story” rather than showing off with bravura abstract effects.

The drawing is realistic, yet expressive, both in terms of the backgrounds, the chosen camera angles and the characters. One hardly needs word balloons to get the gist of what the characters are saying. I also like the design of the characters; they are attractive yet individualized, maintaining their likenesses from shot to shot.

Finally, Colan’s pencil technique is a gas, really fresh and unworked. He seems to be slapping it down with no discernible underdrawing or correcting. Hell, he’s not even using a straight edge. Is this the payoff for 60 years of professional drawing experience? One can only hope I will be so lucky. 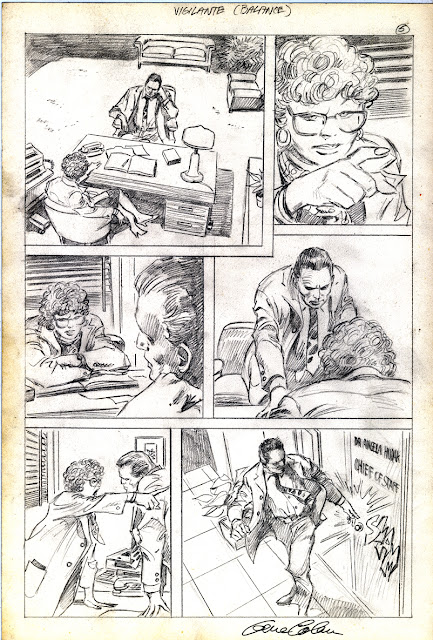 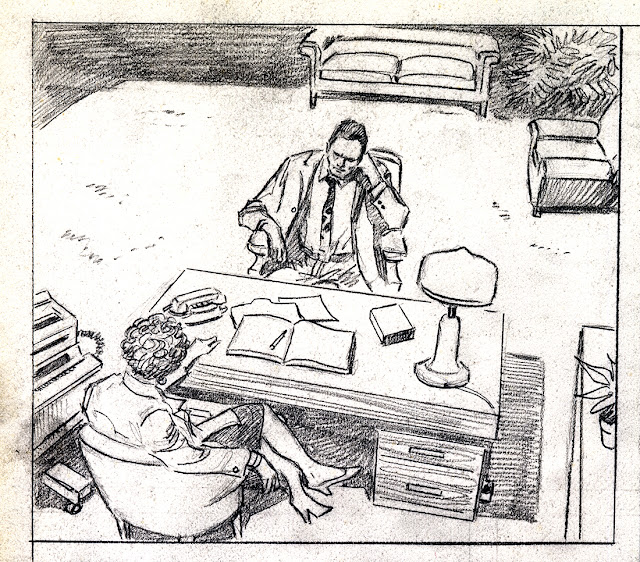 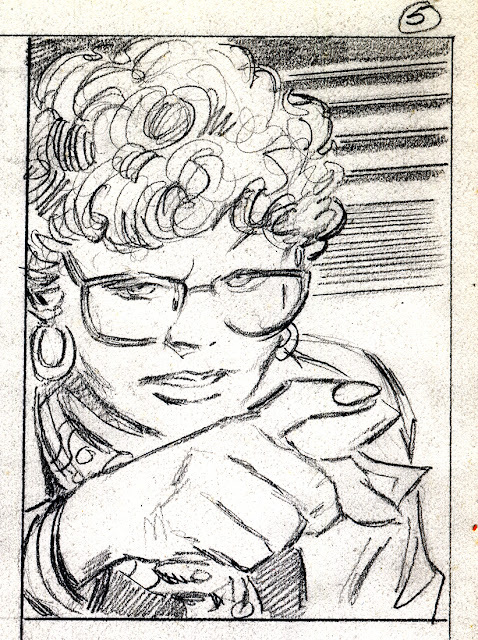 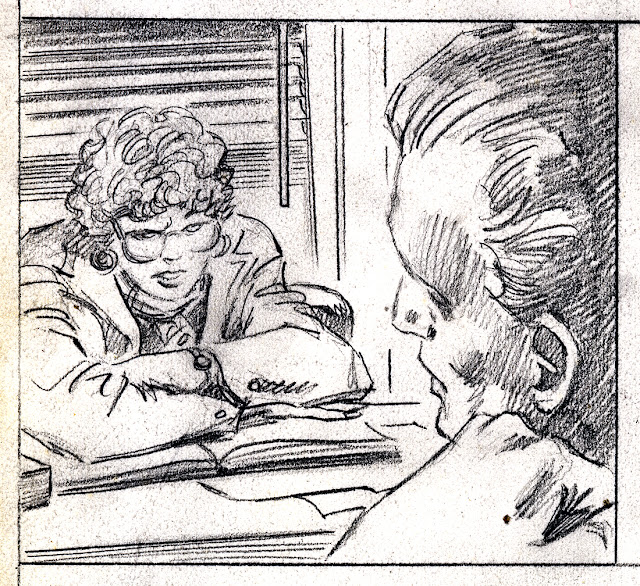 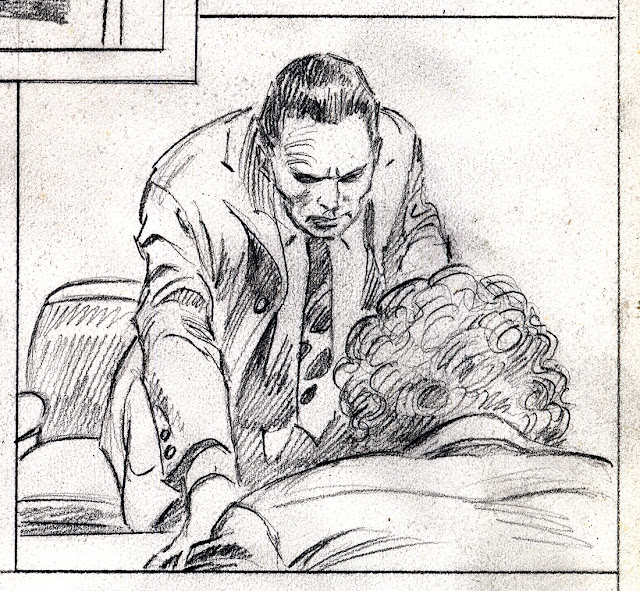 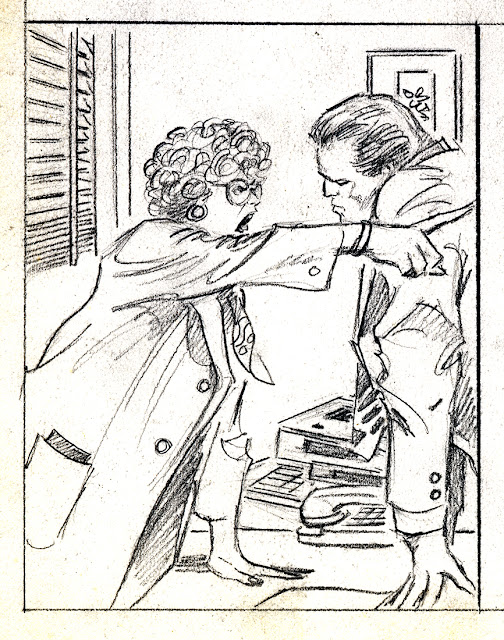 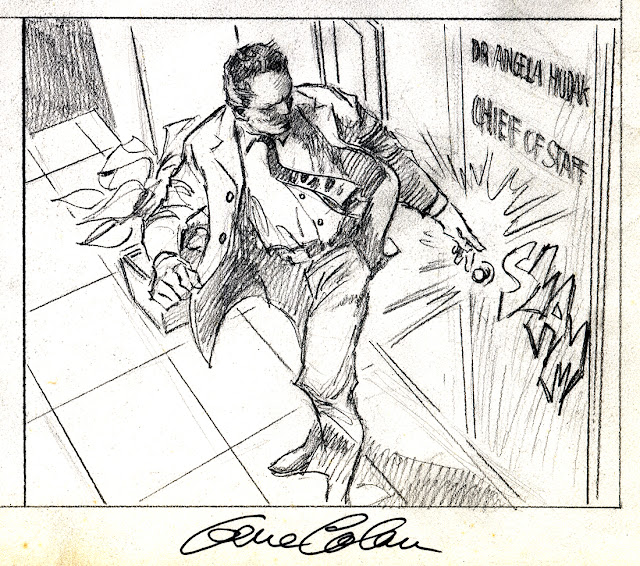 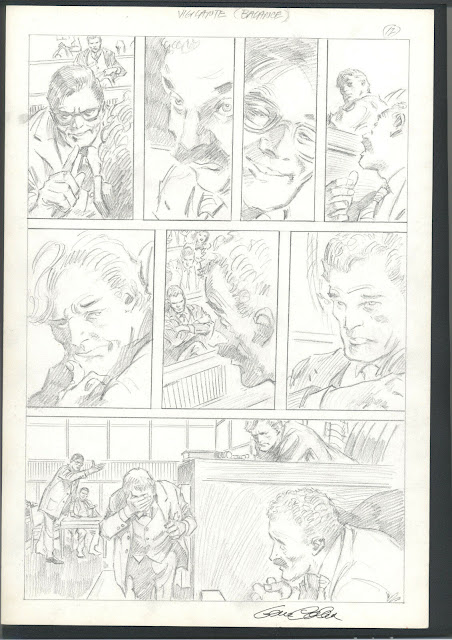 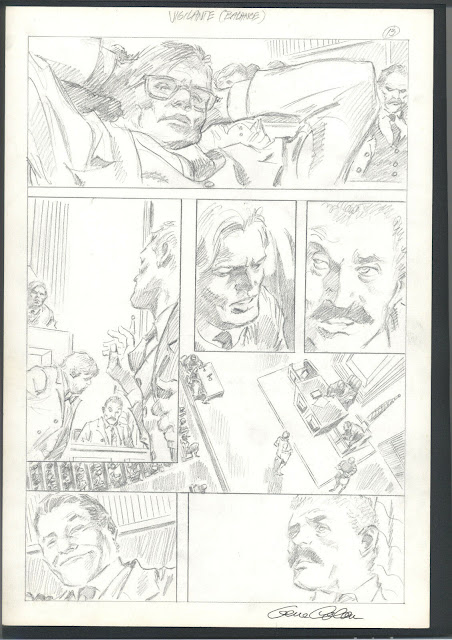 Posted by Brad Rader at 4:39 PM No comments:

I own 5 original pages pencilled by Gene Colan. I figure I’d start out with the two unlinked pages in my possession.

This page saw print in Marvel Comics Super Special #14. It was a full color magazine formatted floppy. Marvel had printed boatloads of black and white magazines in the 70’s, when they were trying to drown Warren Publications out of the newsstand. I assume, at this point, they had shifted their focus to Heavy Metal Magazine.
I won this page on Heritage Auction. Like most non-superhero, non-famous character pages, this one was dirt cheap (FYI). And it’s a nifty page; great compositions, dynamic camera angles with lots of variety, a multiplicity of well staged crown shots, consistent likeness across multiple panels of unrecognized (by me) actors, and to put the cherry on top, Colan’s deft pencil handling is on display. I especially enjoy the herringbone pattern on the start’s jacket.

I poked around, and downloaded (for free- thanks, https://www.zipcomic.com/marvel-comics-super-special-issue-14) the artwork to the magazine-as-printed. Marvel.fandom reports that the comic story was inked and colored by Tom Palmer. 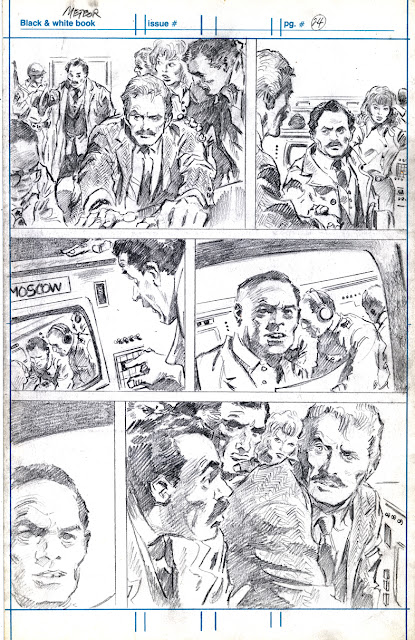 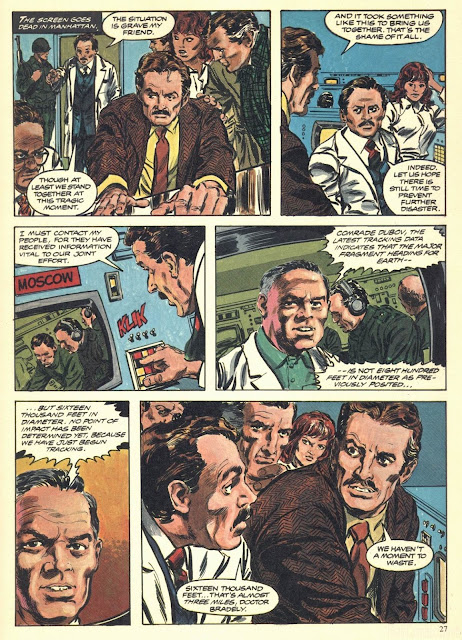 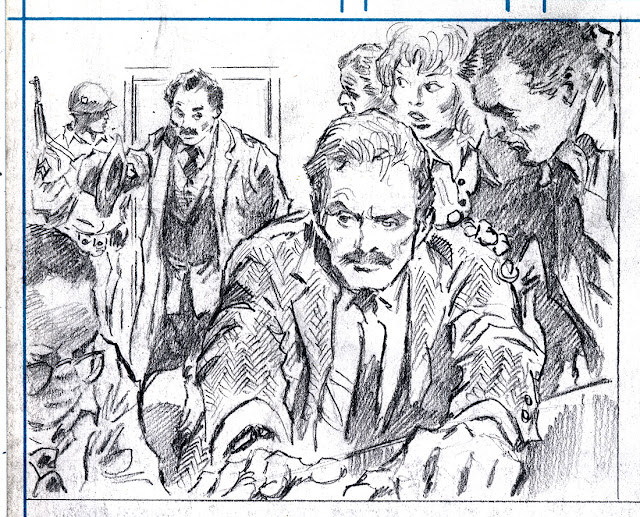 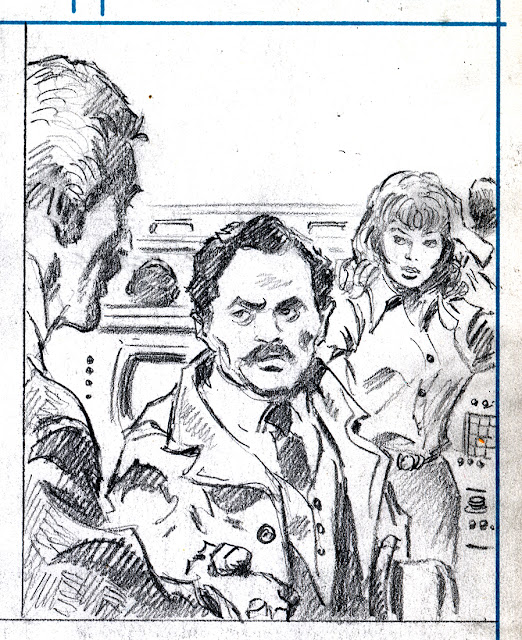 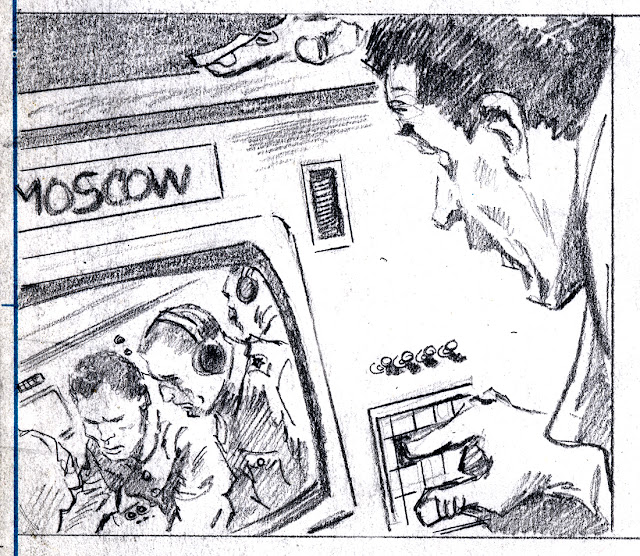 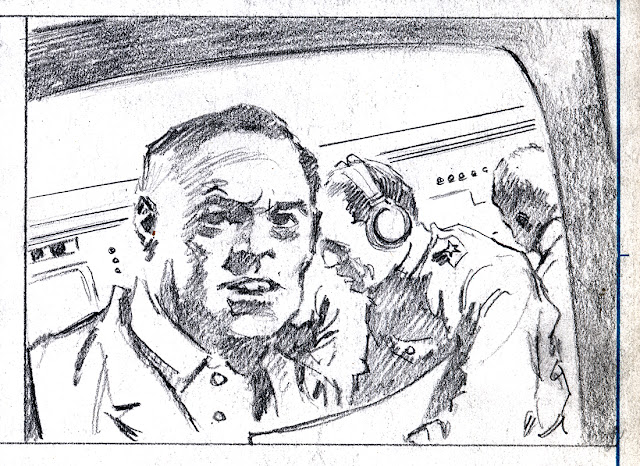 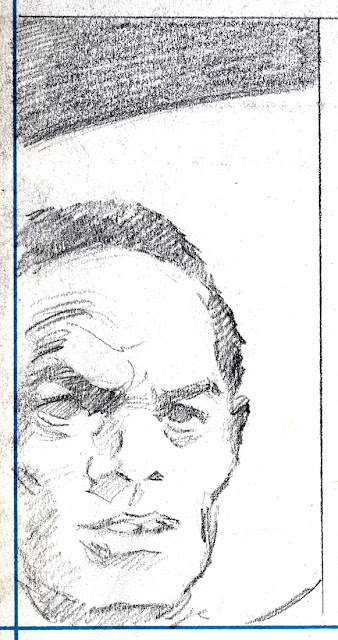 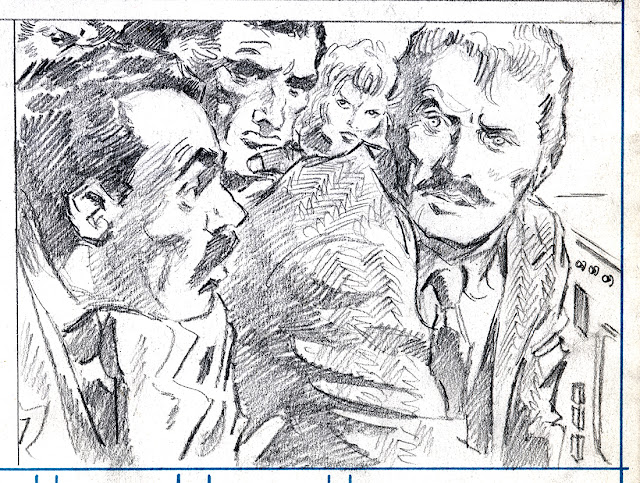 Posted by Brad Rader at 6:53 PM No comments:

This is a piece of original art, done especially for me by Charles D Payne Jr, back in the early '00s, when we were fellow artists working on "Stripperella", for PopToons (a subsidiary of Nickelodeon created solely for the purpose of providing the studio cover for doing an adult animated series). Charles and I re-connected yesterday on LinkedIn and Facebook, so I dusted off this attractive ceramic ornament, photographed it, and am sharing it with y'all. (June 6, 2020) 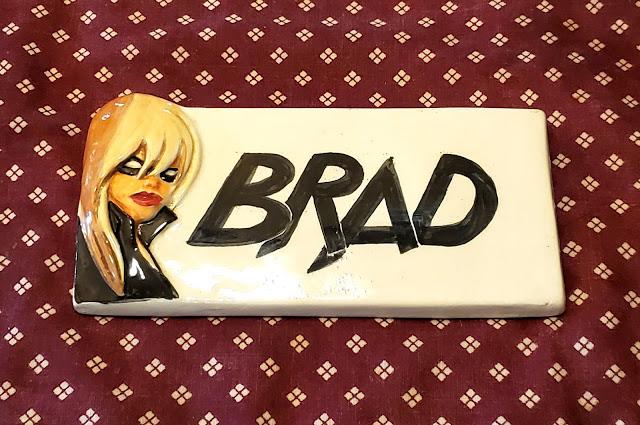 Posted by Brad Rader at 2:01 PM No comments: