I won in this page in auction (Heritage Auction) on December 18, 2016. It is from Whiz Comics 129 and is attributed to “Bob Butts”, who I have never heard of. Being unfamiliar with the artist, and uninterested in “Lance O’Casey” (whoever HE was), my sole attraction was to the page itself. More precisely, what caught my eye was panel 2. I LOVE the ink work  in this panel and jagged almost serrated wave-lines and spotted blacks, and how the artist worked back into the wave-shadow shapes with little brush flecks of white paint, similar to the black brush-ink shapes in the light areas. Far from a placid ocean establishing shot, this image speaks of high winds, emotional turmoil. 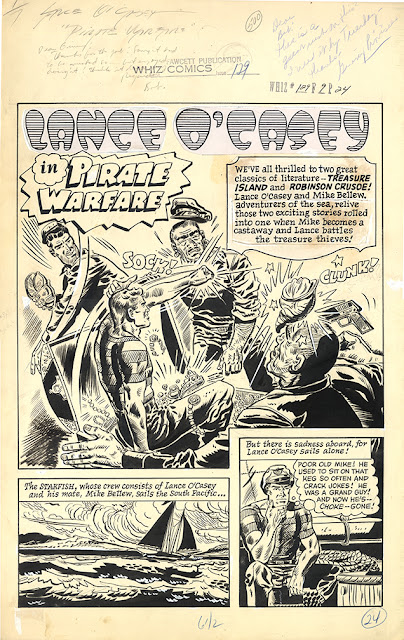 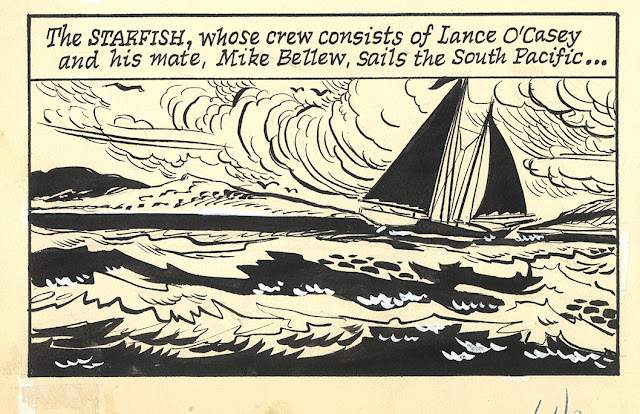 The rest of the page is “not so much”, not up to the spectacular operatic line quality of panel 2. Not bad- I rather like the chunky slabs of shadow-ink on Lance’s pants in panel 3, and the weird squiggles pretending to be cross-hatching is swipeable to my eyes. And the lines of movement in panel 1 are pretty cool. One quibble: there’s no line-of-action connecting the conch conking the crook in the lower right corner, to Mike Bellew, the man throwing it in the upper-mid left. 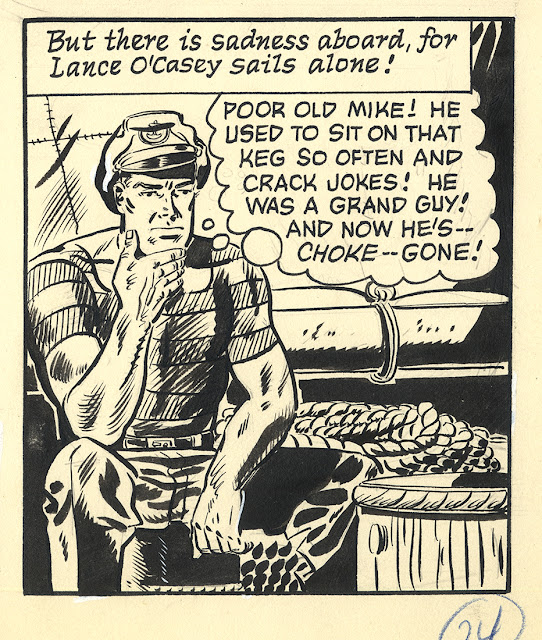 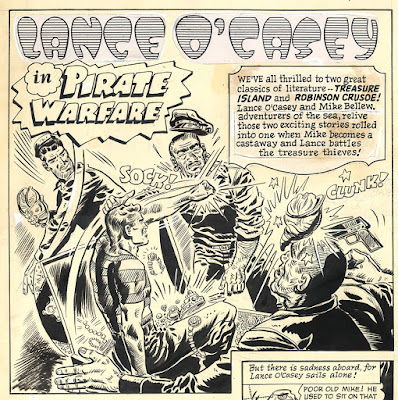 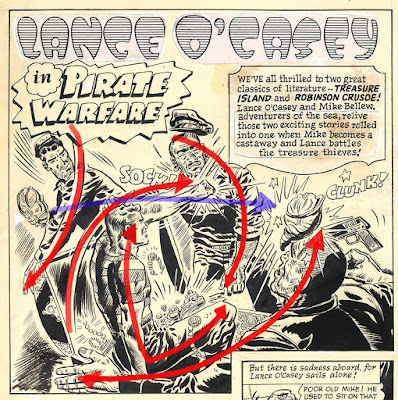 Bob Butts is not listed in Lambiek.com. Comicvine.gamespot.com has nothing on him except that he has art credited in Amazing Mystery Stories #20 and #23. An obituary for Robert Fabian Butts Jr. says he was born on June 20, 1919 and died on May 26, 2008, of cancer.

“Robert Butts… was the oldest of three sons … and was a graduate of the Pratt Art Institute in Brooklyn. Durning World War II Rob served in the Air Force as an Instrument Specialist, repairing airplanes in the Pacific Islands. After the war, he worked in New York City in such diverse venues as medical textbooks and the comics including panels for Batman and the Mike Hammer series.

“Robert worked for many years as a part-time illustrator for the Artistic Greeting Cards Company. Commercial work aside, Rob was an accomplished artist in oils, watercolor, egg tempera and other media, producing a large body of paintings during his lifetime  which with few exceptions he chose not to sell.

“He is probably best known as the co-author of the Seth material, the lifework of his wife, Jane Roberts, for  which he provided extensive and meticulously-researched comments, footnotes, appendices and manuscript editing, not to mention transcribing the Seth sessions themselves by hand, in his own home-made shorthand, then typing up each (usually quite lengthy) session, two carbon copies per page, on an old manual typewriter. Today the books he helped produce have sold over seven and a half million copies world wide. The entire collection of his and Jane’s work resides at… Yale  University, New Haven, Connecticut.”

iTunes Preview says, “Seth is the acclaimed non-physical teacher whose collected works are the most dynamic, brilliant and undistorted map of inner reality and human potential available today. His articulation of the furthest reaches of human potential, the eternal validity of the soul, and the concept that we create our own reality according to our beliefs…stands out as one of the major forces which led to the current New Age philosophical movement.”
Posted by Brad Rader at 3:43 PM