http://warpastpresentfuture.blogspot.com/2011/05/
The above is a link to a blog that prints scans of “30 Year Man” in its’ completeness.

I suppose i should write something about what caused me to bid on this batch of 5 pages from Heritage Auction on January 6, 2013, for a hammer price of $263.13. Here are some random thoughts. 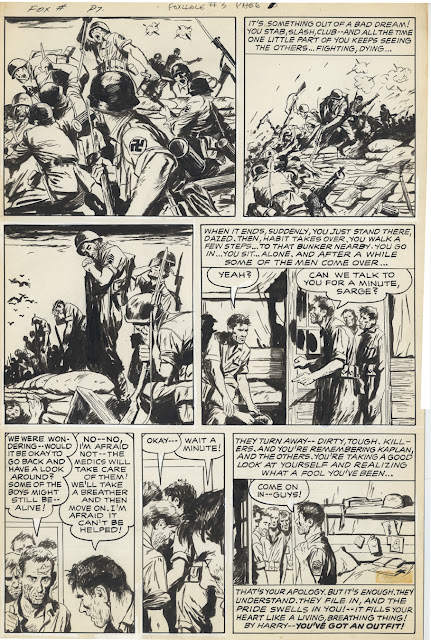 The auction lot was described as 5 pages from a 7 page story This page is labeled as #7 in the upper left margin, but apparently was published as a 6 pager (as you can see if you click on the above link). i have been unable to find any confirmation or denial of this. The missing page 6 seems unnecessary, as the narrative flows smoothly from panel 7 of page 5 to panel one of  (labeled) page 7. 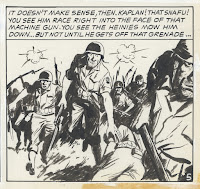 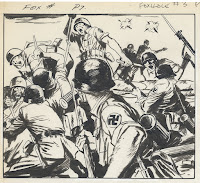 “30 Year Man” covers similar territory, literally, as “Saving Private Ryan”, i.e., soldiers landing on the beach at Normandy and making their way inland toward St. Lo. Judging from page 3, panel 4, our “outfit” is part of a second or third wave.

Albistur’s artwork is less heroic, idealized than Russ Heath, Jack Kirby or Joe Kubert’s. There is a certain distance in his presentation, a reserve, a remove, a matter-of-factness that, to my mind, gives the story a feeling of greater realism. It’s odd to say, but Albistur’s approach feels less comic-book-y, more illustrational than his more popular, better known peers.

The characters aren’t individuated in the same way as Sgt Rock and the Easy Company, or Sgt Fury and His Howling Commandos. Actually, this is one of the pitfalls of war cinema; the characters are difficult to tell apart when in uniform; Albistur doesn’t seem to even try. 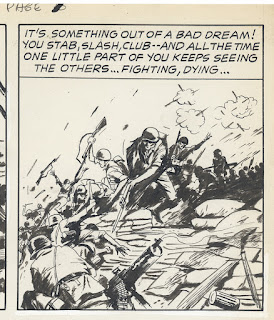 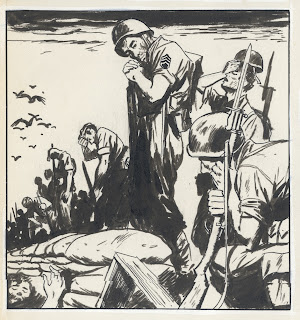 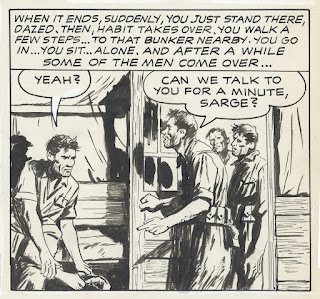 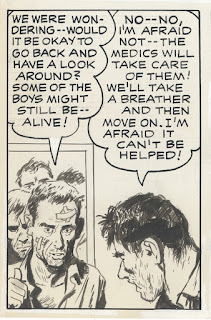 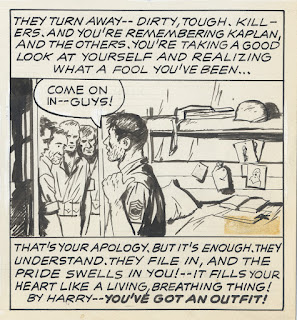 The pages average seven panels, which would make impact and dynamism difficult even for The King himself. Several of the panels in this story are downright iconic, but it’s hard to pick them out of the dense overall presentation, which was my motive for breaking the pages up into separate panels; this is my way of saying “look at this”. Perhaps I’ll do a follow-up post, a slide-show of the especially cool panels. 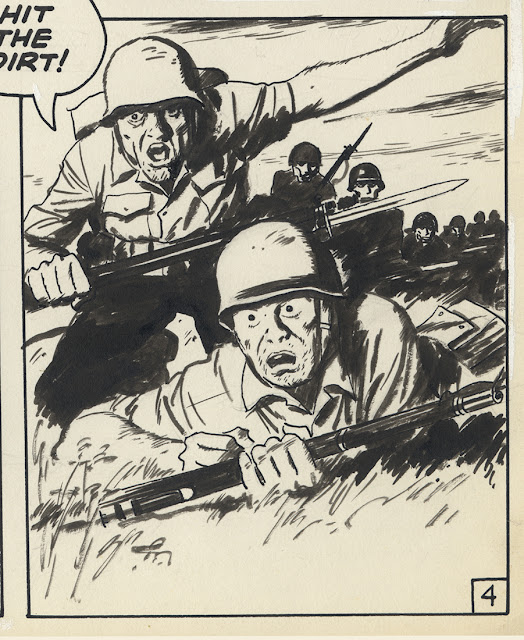 I really dig Albistur’s ink style, rough yet realistic. I didn’t even notice the “dots for eyes” trope until someone pointed it out to me. This doesn’t make the artwork cartoony (for me). I see it as an expedient graphic short-hand. It seems to be used arbitrarily; for instance, on page 4, panel 7 we have two soldiers with their heads at similar angles and sizes- one has dots for eyes, the other has them more fully rendered. Upon closer inspection, I see this isn’t quite accurate. The sergeant’s eyebrows are hidden by the shadow of his helmet, and the thicker bags under his eyes (than the private in the foreground), give his  dot-eyes a more realistic impression.
Posted by Brad Rader at 9:37 PM