https://en.wikipedia.org/wiki/Mainline_Publications
The above is a link to the Wikipedia page from which this article is copies.

“With the 1950s backlash against comics, led by the psychiatrist Fredric Wertham, and propagated during the televised debates about comics leading to juvenile delinquency, as part of the Kefauver hearings, several publishing houses folded. This caused a problem for the printers. As Joe Simon detailed, "Comic book publishers were dropping out of the business in wholesale numbers. The printers grew frantic. It was a necessity of their business that the presses keep running. When the presses were silent, printing companies still had to pay overhead, so they were more than willing to back a new comics organization if it showed promise."[1]
To serve as business manager for their Mainline Publications, Inc., they brought in Crestwood Publications office manager Nevin Fidler, who knew the mechanics of distributors and other necessary vendors, offering him a piece of the company. While keeping their hand in at Crestwood to fulfill their contract, Simon and Kirby invested their savings in their new company, working with veteran paper and printing broker George Dougherty, Jr.[2] The two had long wanted to self-publish, and they further wished to create comics for the adults of the 1950s who had read comics as children in the 1940s.[2]”
As Simon recalled,
“The distributor we chose was Leader News, the company that distributed Bill Gaines' EC Comics. As was the custom the distributor advanced the publisher 25 percent of the total income on a 100 percent sale. This advance was paid when the books were shipped from the printer to local wholesalers around the country. We assigned that money to the printer, who would then pay the engraver. ... Since a comic book would usually sell a minimum of 30 percent, everybody was happy. Mainline would be required to invest in only the editorial material, consisting of the art, lettering and scripts.[1]


They set up shop in late 1953 or early 1954, subletting space from their friend Al Harvey's Harvey Publications at 1860 Broadway.[1] Mainline published four titles: the Western Bullseye: Western Scout; the war comic Foxhole, since EC Comics and Atlas Comics were having success with war comics, but Mainline's was promoted as being "written and drawn by actual veterans"; In Love, as their earlier romance comic Young Love was still being widely imitated; and the crime comic Police Trap, which claimed to be based on genuine accounts by law-enforcement officials.” 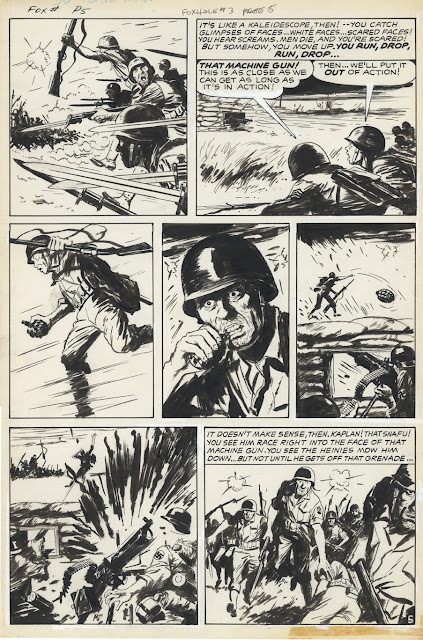