This article was written by Harry Mendryk, and appeared on the Jack Kirby Museum blog on June 7, 2006
“I mentioned Joe Albistur briefly in Chapter 3 of my “End of Simon and Kirby” serial post. Joe is another of those forgotten comic book artists. Web searches have provided nothing in the way of real biographical information. To make matters worse, some have misread his signature and refer to him as Al Bistur. It is easy for me to resist the temptation to look down my nose at those who got his name wrong. Honest mistakes made in the study of comic book history deserve correction not criticism. Besides I have to include myself among those who have made that particular mistake.
I asked Joe Simon about Albistur. Although Simon said he felt he should remember the name, and even corrected my pronunciation, he could remember nothing about him. In a way this is not surprising. Simon worked with a lot of artists over the years and Albistur worked for the S&K studio for only a short period of time. But it was that critical time during the Mainline period. Albistur first appeared in Police Trap #1 (September 1954) and last showed in Young Romance (October 1955). During his stay with S&K Joe produced 21 stories; 6 for Police Trap, 1 for Win A Prize and 14 for the Prize romance titles (see checklist). His appearance in these particular comics, but none of the other Prize titles, is one of the reasons I am convinced that Simon and Kirby were still producing the Prize romance titles at the same time they were publishing their own comics under Mainline.” 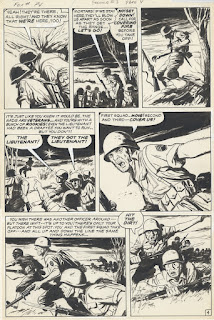