This is blog #55 of my on-going series sharing pages from the scrap book of Minnie Holsinger, which she compiled in the 30s and 40s while she and Grandpa Charlie were saving to buy a farm.

This illustration is from a series of images I assume that were culled by Grandma Minnie from a calendar produced by Manor Bakers in the late 30’s or early 40’s. The work is credited to Henry Hintermeister, who’s work has been featured in the Farmers Wife blog series posts 2, 5, 31, 32, 33, 53 & 54.

I’m curious and to the symbolic significance of the building shapes in the right background, behind the preacher dude. Is this suppose to represent the old world order, mandating the peg-legger (Peter Stuyvesant, I presume) to head out to the new world and remake it for caucasian protestants? This is odd because they’re on the right, facing left and usually that sort of thing (traveling towards a goal) is left facing right. On the other hand, on maps, Europe is to the right of the Americas, the East Coast is to the right of the West (Left) coast, etc, so it makes sense. Never mind. 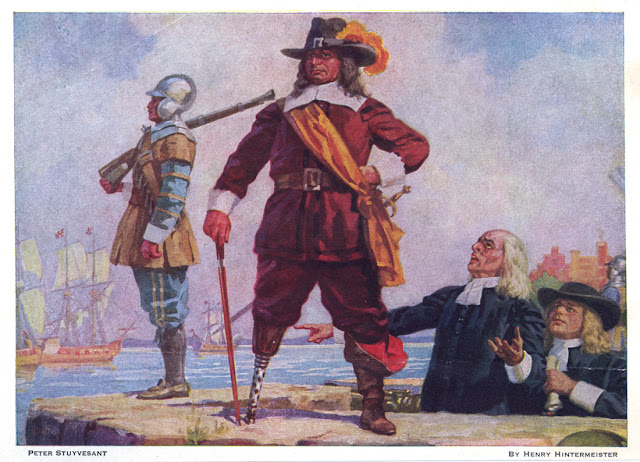