This is blog #54 of my on-going series sharing pages from the scrap book of Minnie Holsinger, which she compiled in the 30s and 40s while she and Grandpa Charlie were saving to buy a farm.

This illustration is from a series of images I assume that were culled by Grandma Minnie from a calendar produced by Manor Bakers in the late 30’s or early 40’s. The work is credited to Henry Hintermeister, who’s work has been featured in the Farmers Wife blog series posts 2, 5, 31, 32, 33 & 53. Mr. H was a popular and prolific illustrator back in the day, but is now all but unknown; at least, I’d never heard or seen of him until I started working on this series.

To recap from previous post-bios: Henry Hintermeister (b. 1897 / d. 1970)  His father John Henry Hintermeister was an illustrator as well.  Father and son often worked as a duo, from the 1890's to the 1940's, under the pseudonym Hy Hintermeister.  They became well known producing over 1,000 of illustrations; John Henry and Henry were often compared to Norman Rockwell with their illustration storytelling.  The duo produced a series of calendars depicting American history from 1775-1787.  They used identical signatures making their illustrations nearly impossible to distinguish.

So is this illustration by Hy Hintermeister Sr. or Jr
? Does it matter? 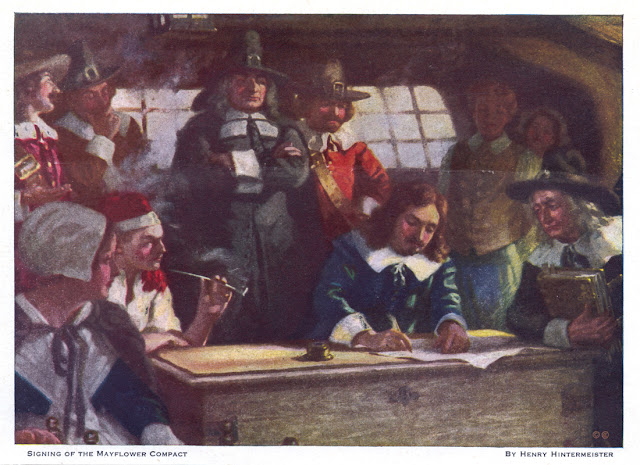