This is image #27 of my on-going series sharing the pages of the scrap book of Minnie Holsinger, which she collected in the 30s and 40s while she and my Grandfather Charlie Holsinger were saving to buy a farm.
Wikipedia sez:
“Edmund F. Ward (January 3, 1892 – December 14, 1990)[1] illustrated for the Saturday Evening Post and did his first illustrations for the magazine before turning age 20. He had a successful career as an illustrator of works that ranged in style and subject matter from dark tonalist in oils to humorous in wash and watercolor. For many years he illustrated the Alexander Botts and Assistant District Attorney Doowinkle stories for the Saturday Evening Post.[2]


Ward studied at the Art Students League in the same class with Norman Rockwell. The two students became friends, and shared a studio in the attic of a Manhattan brownstone. [3] Among his teachers were Edward Dufner, George Bridgman and Thomas Fogarty. He later moved to the Manhattan suburb of New Rochelle, a well known artist colony and home to many of the top commercial illustrators of the day including friend Norman Rockwell.[4][5] At the time more than fifty percent of the illustrations in the country’s leading publications were done by artists from New Rochelle.[6] He spent his professional career in White Plains, where he painted a mural for the Federal Building. He was a longtime member of the Salmagundi Club, the Guild of Free Lance Artists, and was a member of the Society of Illustrators.[7]” 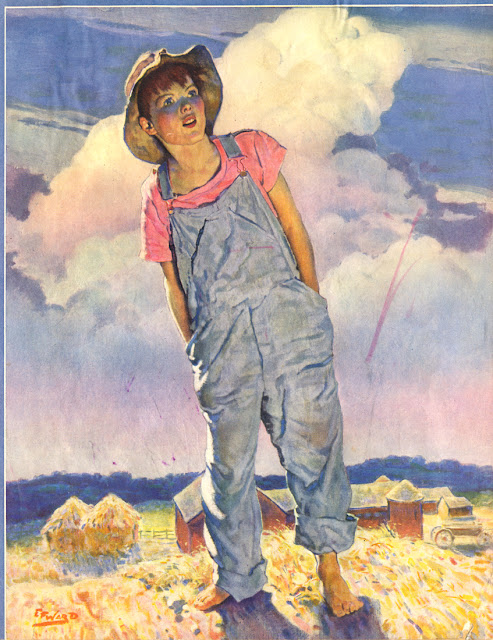 I LOVE the color use (especially on the boy's face; the way it places pink against blue. In fact, most of the painting seems to be playing off pink against blue. Except for the ground at the boy's feet. On a side note, it fascinates me that E.F. Ward was completely unknown to me before researching this blog post, but Norman Rockwell is a major cultural icon. T'would be interesting to compare/ contrast the two for insights as to "how come"?
Posted by Brad Rader at 7:00 AM