This is image #23 of my on-going series sharing the pages of the scrap book of Minnie Holsinger, which she collected in the 30s and 40s while she and my Grandfather Charlie Holsinger were saving to buy a farm.
This painting is signed by Forrest C. Crooks, about whom askart.com reports : “(1983-1982); … born in Goshen, Indiana in 1893.  His family moved to southern Michigan when he was 6 months old, and he lived in Michigan until he graduated from High School.
“Forrest Crooks moved to Pittsburgh to pursue a career in art.  At the art school of Carnegie Institute of Technology (now Carnegie-Mellon), he earned his way with commercial art assignments and completed the four-year course in three years - in 1917.  He then moved to New York City to seek work as a magazine illustrator.  Over the years he illustrated stories for such eminent authors as Irving S. Cobb, Rudyard Kipling and Sir Winston Churchill.  His illustrations appeared in Cosmopolitan, Redbook… (He is) known for: stained glass design, weaving, painting, murals”


This painting is similar in subject matter to yesterday’s post, yet the difference is between night and day in my eyes. I can definitely see this artist designing stained glass. The colors are vibrant-yet-subtle, with a tendency towards flatness and abstraction. I can also see that this artist was in to textiles, the adoration of which seems to be the subject of this piece. 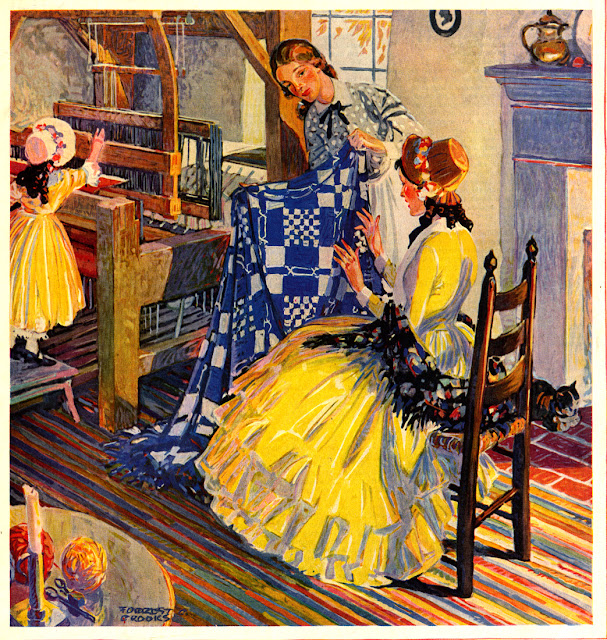