This is image #11 of my on-going series sharing the pages of the scrap book of Minnie Holsinger, which she collected in the 30s and 40s while she and my Grandfather Charlie Holsinger were saving to buy a farm.
This stunning watercolor was by Phil Dike, painted for the cover of Country Gentleman Magazine. Quoting “California Watercolors 1850-1970” (as quoted on californiawatercolor.com) “Phil Dike, N.A. (1906-1990) Born: Redlands, CA; Studied: Chouinard Art Institute (Los Angeles), Art Students League (New York), American Academy (France); Member: National Academy of Design, American Watercolor Society, California Water Color Society, Philadelphia Water Color Club. Phil Dike was born and raised in Southern California. In 1923, he was awarded a scholarship to study at the Chouinard Art Institute and received instruction from F. Tolles Chamberlin and Clarence Hinkle. He continued his art education in New York City studying with George Bridgman, Frank Vincent DuMond and George Luks. After returning to California in 1929, he began teaching at the Chouinard Art Institute and was one of the first artists to develop what became known as the California Style of watercolor painting.
In the early 1930s, he continued teaching and painting and took further studies in Paris. His watercolors were being exhibited in museum shows throughout America and he was receiving wide acclaim and numerous awards. By 1935, he was also working at the Walt Disney Studios where he taught art and color theory while working on animated films. Among the many classic films he worked on were Snow White and the Seven Dwarfs, Fantasia and The Three Caballeros. In 1938, Dike served as president of the California Water Color Society.
After World War II, Dike left Disney and went back into teaching and painting full time. He and Rex Brandt formed the highly successful Brandt-Dike Summer School of Painting and during regular school months, he taught at the Chouinard Art Institute. It was at this time that Dikes watercolors became more modern looking. He began using calligraphy in very creative ways and incorporating geometric abstractionist ideas into his work.
Through the 1950s and 1960s, he was a Professor of Art at Scripps College and Claremont Graduate School. He was an inspiration to many well-known artists who came out of these schools, and was honored with the title of Professor Emeritus when he retired. In addition to living in Claremont and painting at Balboa Bay, Dike also built a second home in Cambria on the central California coast. Harbors, driftwood, figures on the beach and dramatic rock formations all became subjects for his many abstract watercolors of this era. Dike is remembered as a thoughtful, caring teacher and is one of the main innovators in the development of the watercolor painting movement in California.”


Cool! He’s a Disney guy! Worked on some of my favorite animated movies! 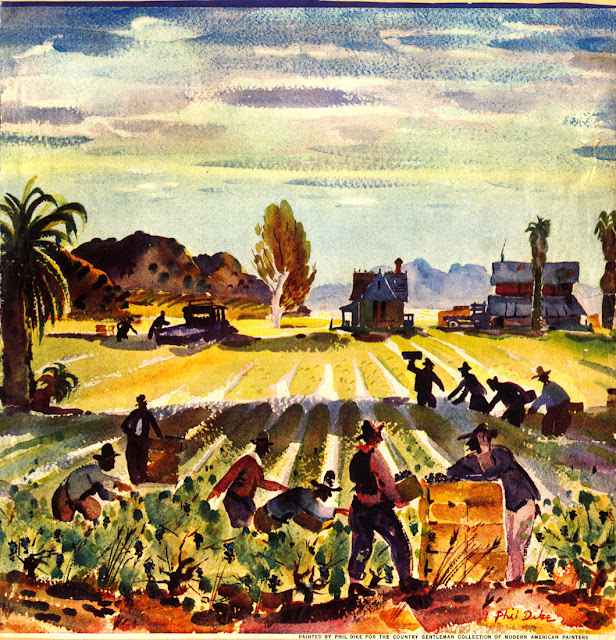