This is image #4 of my on-going series sharing the pages of my late maternal grandmother’s scrap book which she collected in the 30s and 40s. The signature and blurb in the lower gutter says “Painted by Paul Sample for the Country Gentleman Collection of Modern American Painters”

This article is quoted from Wikipedia

“Paul Starrett Sample (09/14/1896 - 02/26/1974) was an American Artist who portrayed life in New England in the middle 20th Century in a style containing elements of Social Realism and Regionalism.

“Sample was born in Louisville, Kentucky. After moving around the country with his family on several occasions, he attended Dartmouth College… where he studied architecture, graduating in 1921. While visiting his brother, Donald, at a sanatorium in Saranac Lake, New York, Sample contracted tuberculosis. He stayed for treatment… in Saranac Lake for four years. There he met SylviaHowland, whom he married in 1928.

“At Saranac Lake, Sample studied drawing and painting under Jonas Lie. He then studied at at the Otis Arto Institute in Los Angeles, California. There his work reflected social issues connected with the Great Depression with to noted paintings in 1931. In 1926, Sample joined the faculty of the University of Southern California in the school of architecture, where he remained until 1938. In (that year) he returned to New Hampshire to become the artist in residence at Dartmouth college, a position he held until 1962. In addition to his social and regional paintings, Sample produced artwork for various magazines during World War 2.

“Sample did the cover art for Carl Sandburg’s 1948 novel, “Remembrance Rock”.
In 1941 he was inducted into the National Academy.”

I really like the painting’s use of white and negative space in the foreground and the manner in which the landscape is dimmed by shadow in the background. I like the touch of the barn in the middle ground having no snow on its roof, presumably because it was metal and uninsulated. Also, it breaks up the field of white more than a snow covered roof would have. It would be interesting to know how much of this composition was drawn from life and what was created to serve the needs of the work. 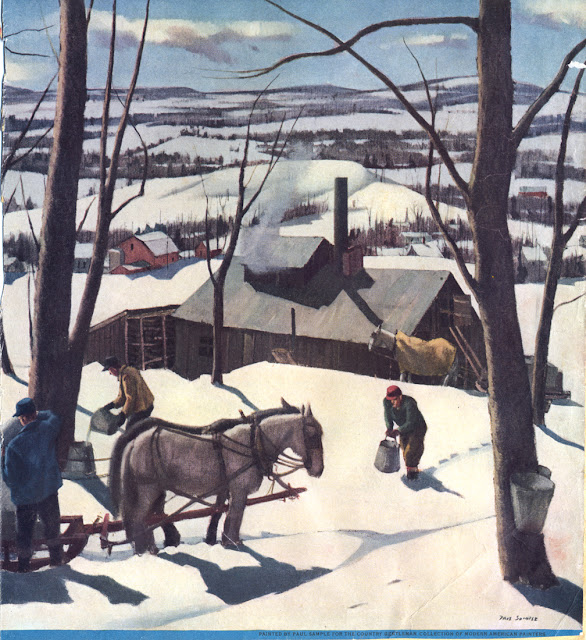