This is image #6 of my on-going series sharing the pages of my late maternal grandmother’s scrap book which she collected in the 30s and 40s.
“The dog possesses an ebullience which is a sheer delight.” 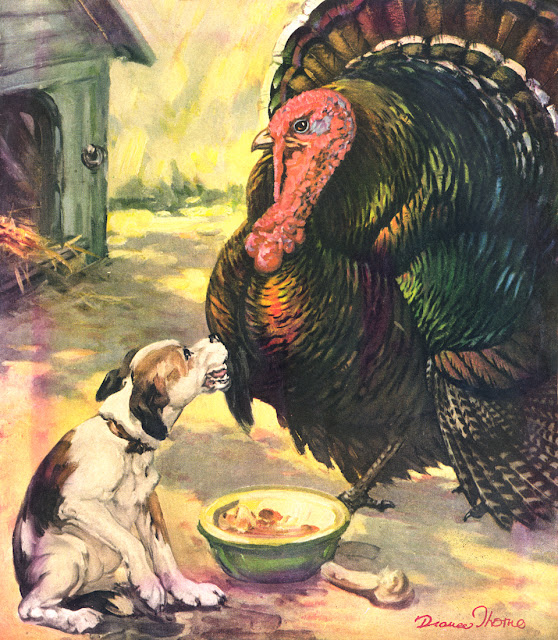 The preceding is a quote by Diane Thorne, artist of today’s image. Quoting from her website, dianathorne.com:
“Diane Thorne was born Ann Woursell on 10-07-1895, in Odessa, Russia. She was eventually to become one of America’s most recognized canine artists.
“Thorne began her formal art studies at the Imperial Art Academy in Munich and Charlottenburg College in Berlin. WW 1 began two years later and Thorne and her family were detained by the German government. They managed to escape to England, where Thorne was said to have supported herself as a reporter, Librarian, writer, bicycle shop owner, and typewriter repair person. At this time she began her experiments in both illustration and etching and was said to have studied with artist William Strang. On 09-27-1920, Thorne and several of her family members arrived in the USA. Her first published etching, “Rollin’ Home” was well received in 1926. From this point on the became an established artist.
“In her private life she was known as Mrs. Arthur North…The pseudonym “Thorne” is an anagram of the name “North”. There is evidence that Arthur North is an alias of artist Carton Moore-Park (1877-1956). This ru se allowed Thorne and Moore-Park to present themselves as a married couple, even though Moore-Park was already married.
“The author-illustrator of more than 40 books and illustrator of more than 50, Thorne’s main reason for success was a total dedication to her drawing and a deep lover for her subject matter. Very much in demand as an animal portrait painter, Thorne illustrated some of the most famous dogs in America, including Franklin E. Roosevelt’s Scotty “Fala”, and Admiral Richard E. Byrd’s “Igloo”, the terrier who accompanied him on his famous Antarcttic Expedition.
“Diana Thorne was most active between the 1920’s and 1940’s. Sadly, she was diagnosed as mentally ill and committed to the New York City’s Belleville Hospital in September 1962. Thorne died in July 1963”
This is a somewhat expurgated version of the original article, which can be read in its entirety at dianathorne.com.