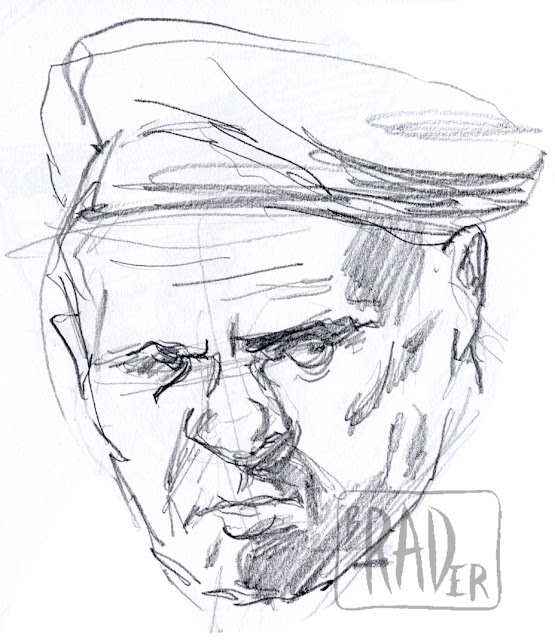 Everybody, I want to introduce you to my latest heart throb. His name is Louis Wolheim. I met him on Turner Classic Movies about a month ago on Silent Sunday Nights, when the network was screening the silent version of “All Quiet on the Western Front”. I was watching, more from inertia than interested when all the sudden HE appeared, hiding beneath the rear bumper of a German WW 1 military truck in the heavy rain at night, waiting for his chance to steal a pig carcass. In the movie, he’s Cat, the German troop leader and mentor/mother hen to the green cannon-fodder recruits trying to survive the Great War’s unrestrained slaughter. 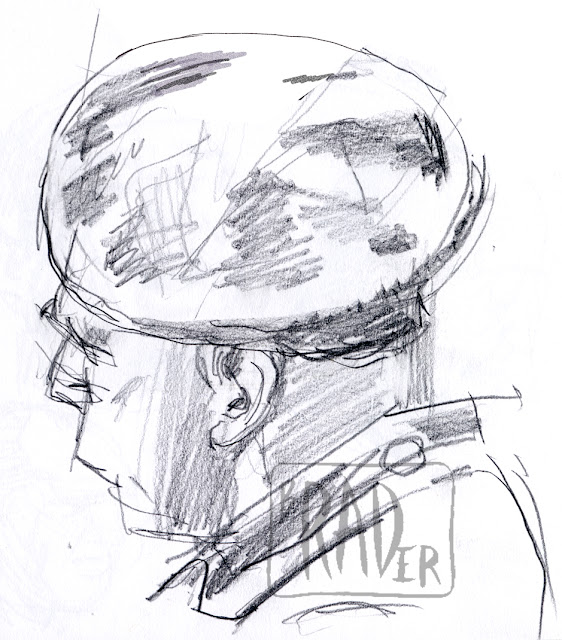 “WHO THE FUCK IS THAT?”, I wondered, now transfixed by the movie. Here we have an an almost too-perfectly cast  type of the big galoot, the thug, the Mafia enforcer, except that he can act both broad and subtly, is charismatic, soulful and telegenic, quick-silver moving between comedic and deadly serious, often in the same scene. “Where have you been all my life?”, and looked him up on my smart phone with one eye while the movie continued (with him not the focus of attention). 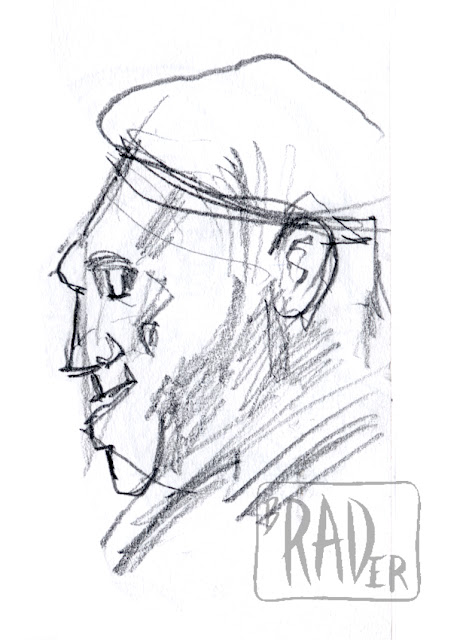 From the website, immortalephemera.com, I quote author Cliff Alperti; Louis Robert Wolheim was “A Cornell graduate who stayed on in Ithaca, New York to tutor students in math, it was pure chance that brought Wolheim to stage and screen when a pair of brothers (John and Lionel Barrymore) visited Ithaca on location … and decided to base their own film company in the picturesque town located in Central New York.” 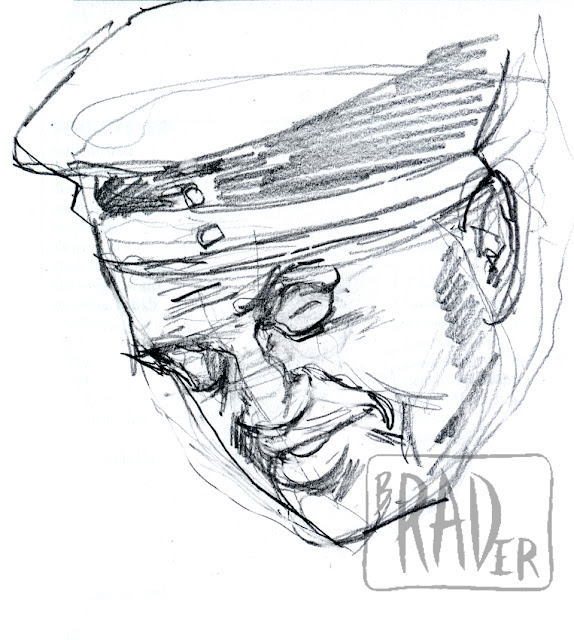 “Most sources state that Louis Robert Wolheim was born in New York on March 28, 1880. All except the census records, that is, which show that through 1905 Wolheim would give his birthplace as Russia and that he and his family would emigrate to New York in 1888.
Wolheim's parents, Elias and Lena, had married around 1870 and according to the 1900 census Lena was mother to ten children total, just three living at the dawn of the twentieth century. Of the three only two, Louis and younger brother Morris, were living with them at that time. Louis Wolheim would be very proud of his Jewish heritage and according to drama critic Ashton Stevens had disdain for Jews in theatre who changed their names to better appeal to the marquee. 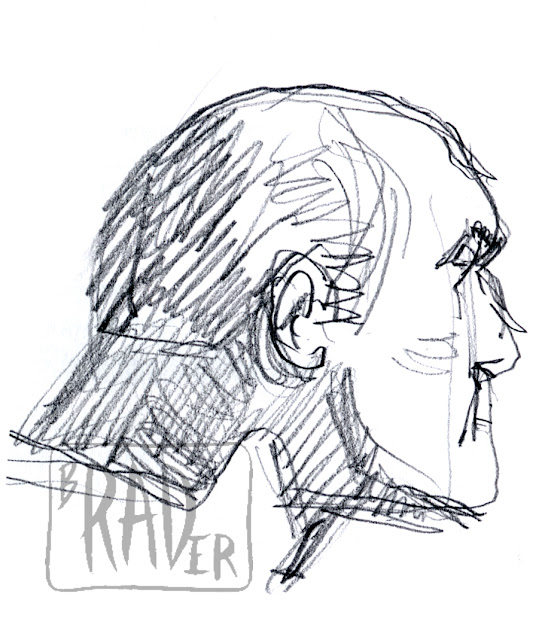 “The bright Wolheim attended the City College of New York before heading off to Cornell where he'd earn a degree in Mechanical Engineering in 1906. The stories are a bit hazy because Wolheim himself was quite the yarn spinner, but his famed mashed up face is typically credited to a injury received while playing football at Cornell.” 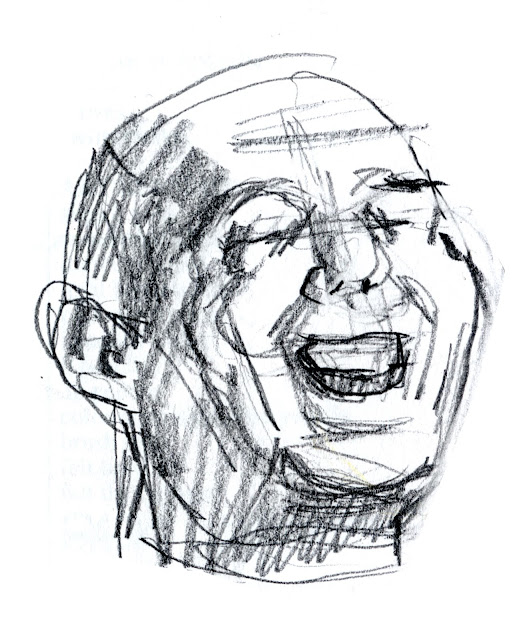 “He'd tutor Cornell students in math over drinks in the Dutch Kitchen bar of the Ithaca Hotel, among them, supposedly, Adolphe Menjou, who did attend the school for three years. Menjou claimed that "My instructor in mathematics at University Prep was the late Louis Wolheim. He had a mind like a calculating machine and a face that looked as though it had been run over by a truck" (26). Menjou added that he suspected Wolheim made more profitable use of his mathematical mind gambling with cards and dice. 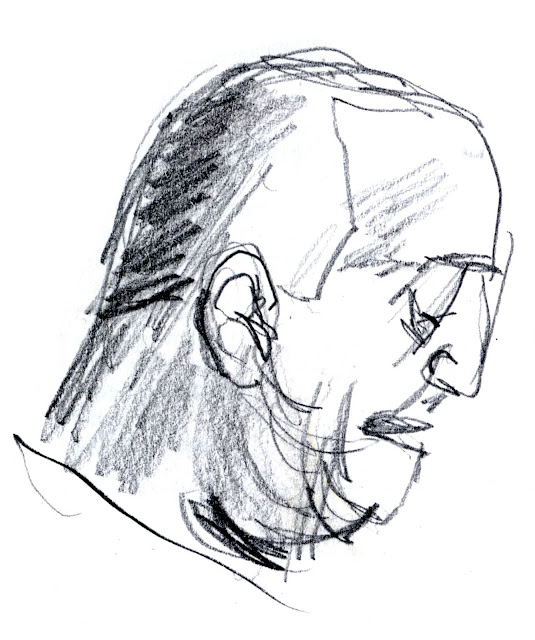 “As for the face, he was sensitive about it.
There were newspaper reports announcing a plastic surgery intending to fit him with a profile resembling John Barrymore. Tracy Hammond Lews article "Louis Wolheim's Nose Caused Much Trouble," quoted by Yvonne Shaffer in Performing O'Neill, claimed that at one time very early in Wolheim's acting career he did get his nose fixed at his mother's insistence. Supposedly he went out to celebrate his handsome new appearance that night, got into a brawl and promptly had the nose re-broken. 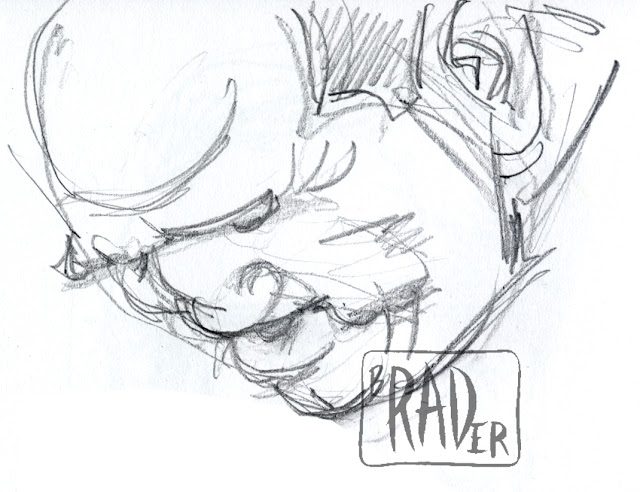 “As for the looming surgery in 1927, which was to be performed by the same doctor who had fixed heavyweight champ Jack Dempsey's nose, Shaffer writes that United Artists stepped in with an injunction to halt any procedure because they wanted the same face that they signed to a contract. 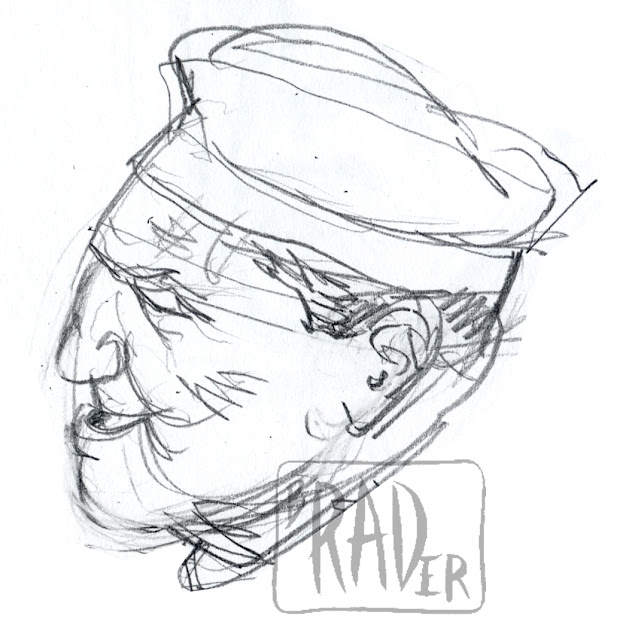 Wolheim died of cancer in 1931, at age 50, just before he would have started filming “The Front Page”, later made starring Adolphe Menjou. 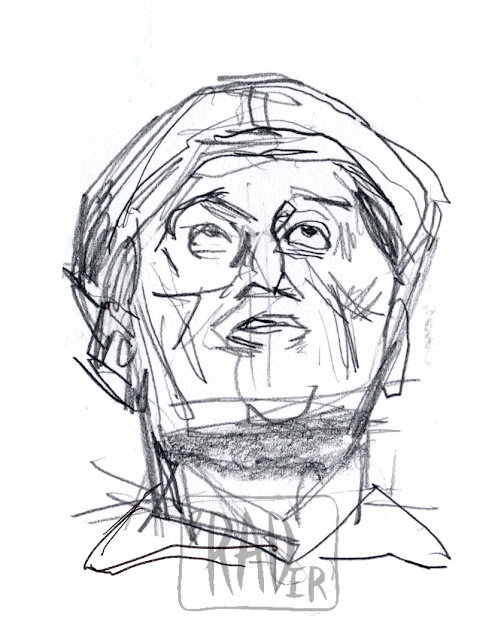 I was bereft when I learned of Wolfeim’s untimely demise. What a shame, what a waste. He died at the dawn of the sound era, most of his career was acting on Broadway (he originated the lead rolls in “The Hairy Ape” and “What Price Glory”) and most of his earlier, silent movies are lost. 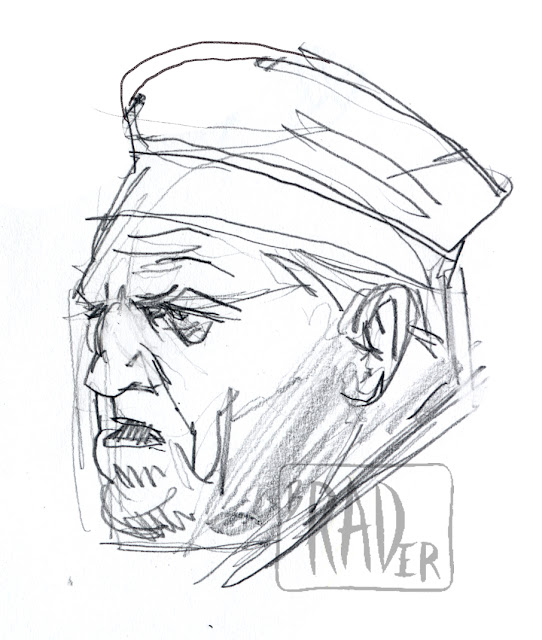 The pencil drawings are done from freeze frames of the Turner Classic Movie DVD. 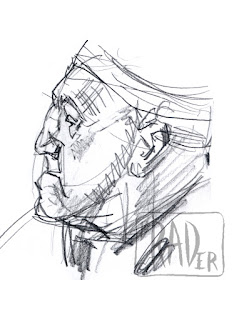 I found that disc frustrating. The commentary, by Robert Osborn, focuses entirely on the callow young lead, Lew Ayers and doesn’t even mention Wolheim. WTF?!? 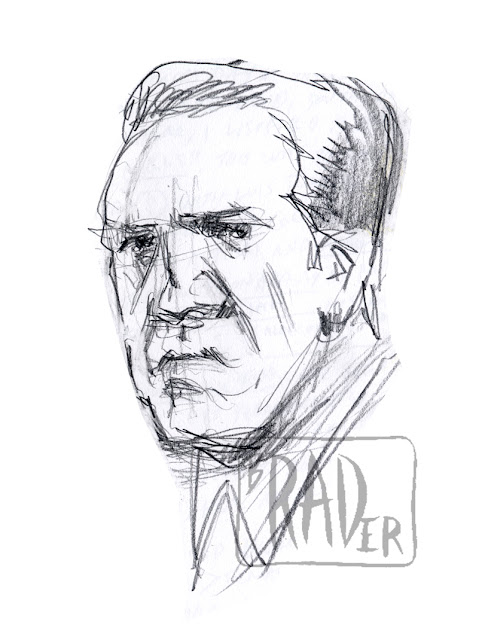 And the version TCM chose to release was the American Talkie version, not the silent version I’d seen a week previously. It’s weird seeing an all-American cast portraying an all-German story. 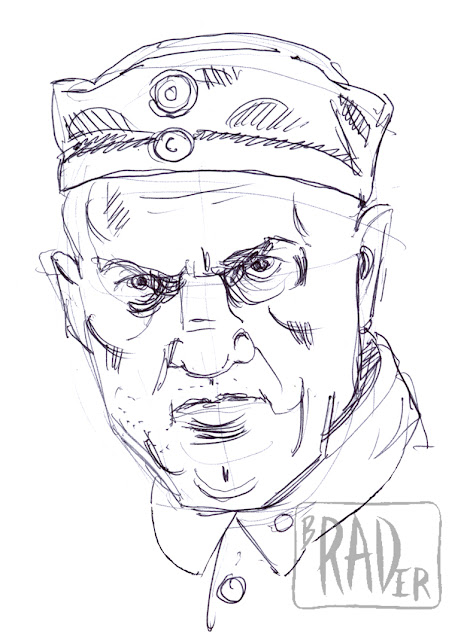 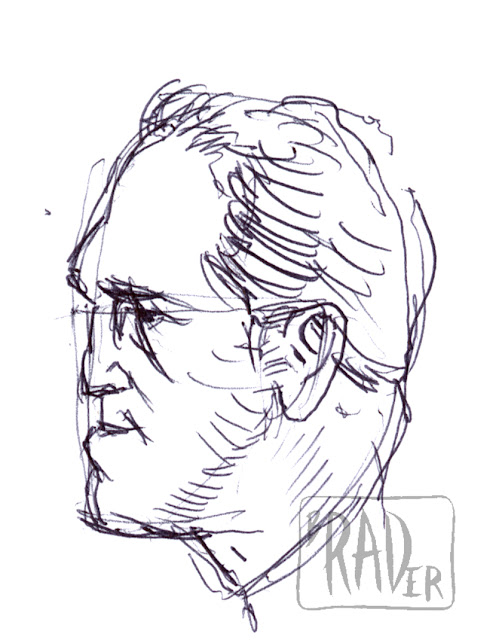 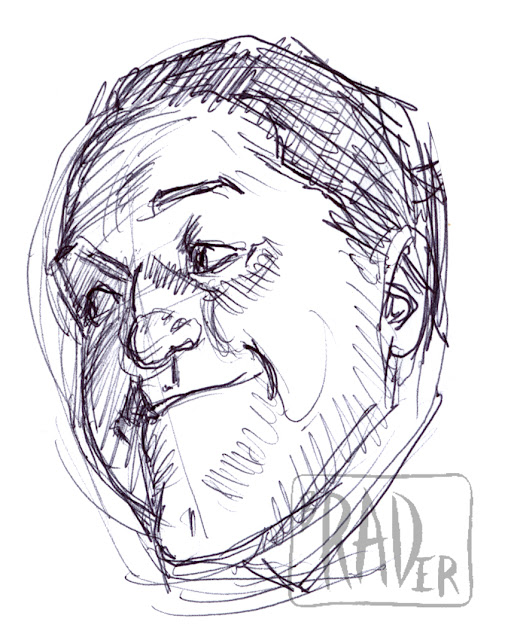 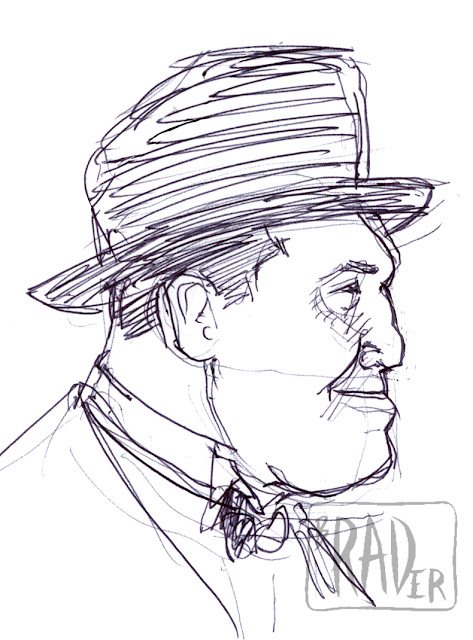 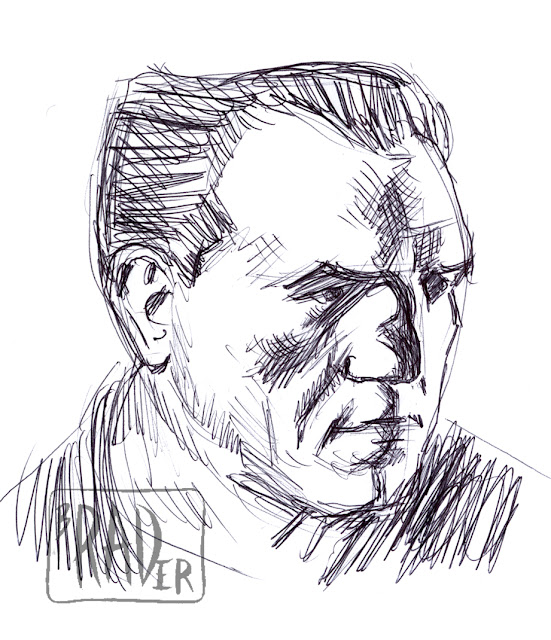 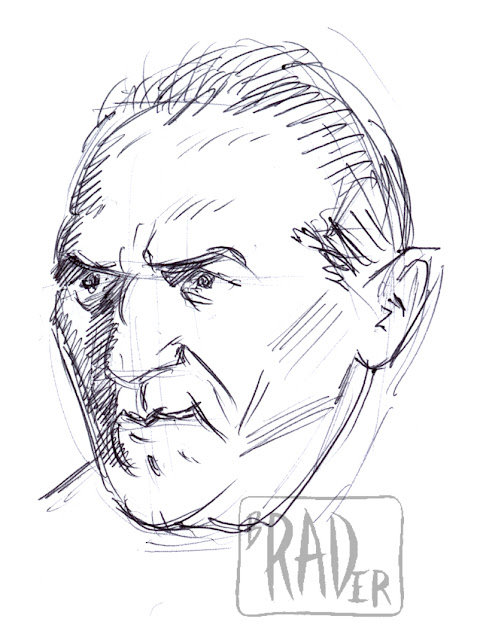 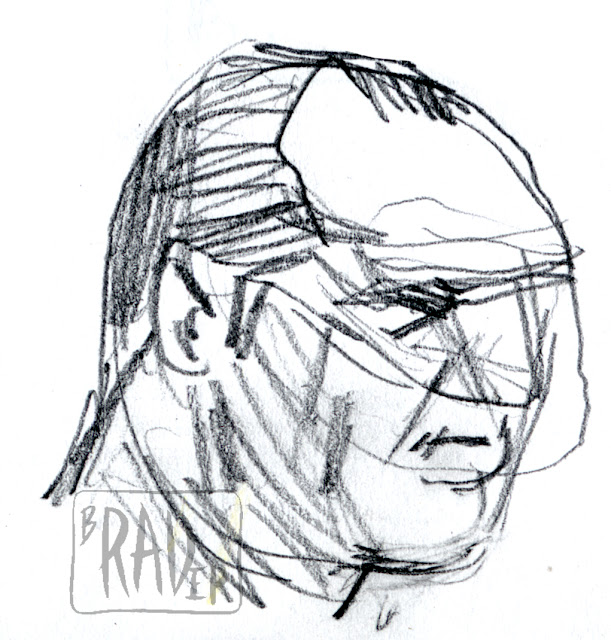