This is a post of storyboard pages 63 through 66. I boarded this section.

This sequence interests me because of it reveals some aspects of film continuity I’ve only recently become aware of: the focal “area of interest” as one assembles a montage.

I recommend y’all watch the YouTube video by Linday Ellis, “Why is it So Hard to Remember What Happens in Transformers?” https://www.youtube.com/watch?v=aE-6M7IbNSI
It’s part of a series of video blogs where Ms. Ellis enunciates a broad range of film theories I have not previously been exposed to; in this case, areas of interest within a frame and their placement in succeeding images within a montage sequence.

To paraphrase, Ms. Ellis theorizes one of the reasons for Transformer flick’s unmemorablility is that the focal area of interest jumps all over the place during montages, making it difficult for the viewer to absorb (and remember) any given montage.

In the case at hand: 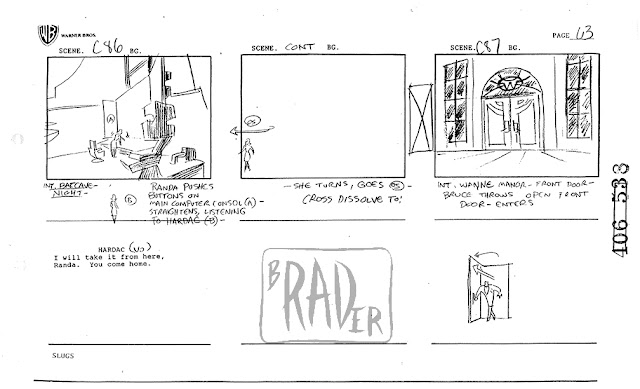 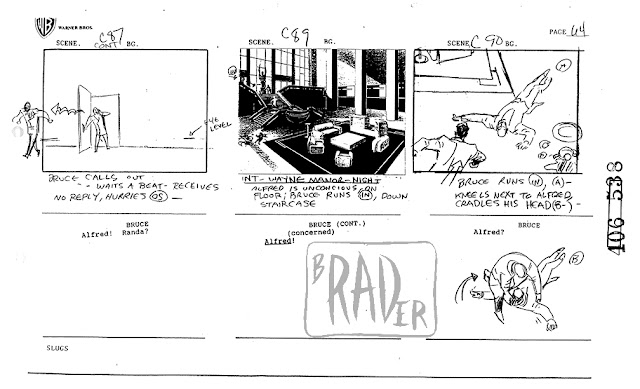 (C89) (This panel is hard to read, so I’m including a panel enlargement with the three areas of interest highlighted.) We see, but might not notice, Alfred’s unconscious form lying in the lower left corner. Bruce strides in from upper-middle left atop the mezzanine, stops, calls out as he spots Alfred, then rushes down the staircase. 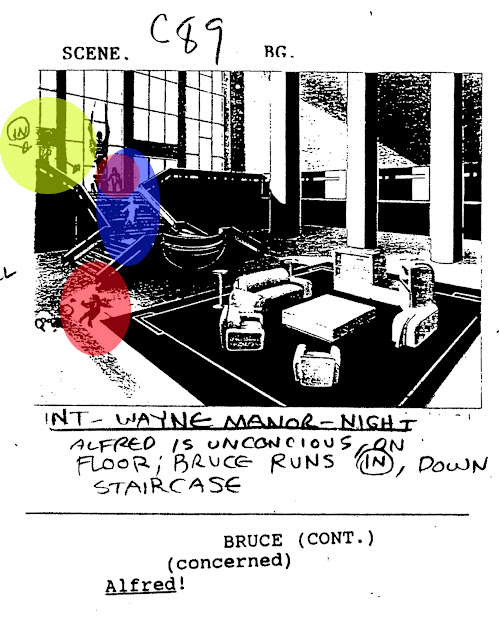 Scene (C89) makes me nervous; I can’t decide if this is good filmmaking or bad. As a storyboard panel, I had to go to extra lengths to allow the reader of this blog to even know what is happening (in the panel). As a piece of film, however, it would work well enough; even if one doesn’t spot Alfred within the palatial expanse of the layout, one would pick up Bruce as he enters. (Film-maker note: The eye sees movement above all else, even if it’s in the tiny uppermost corner of a frame.) To load the readability dice, I position Alfred at the left-most corner of the carpet so that it serves as a pointer. It also hooks up nicely, graphic-image-wise, with scene (C90).

The question is, is this good filmmaking to have all the action clumped in the left side of the frame(s)? One might reasonably ask why I didn’t re-draw the BG from a different angle to allow Bruce to travel through a larger swath of the compositional space, perhaps placing Alfred in the foreground of a lower angle, emphasizing his unconscious form. In this case, the answer is probably that I was too lazy, and it would have  cost money to re-draw the stock BG from a different angle.

Also, though I’m sure it was unconscious on my part, scenes (C86) through (C89) all confine the area of interest to the left third of the compositional space of each scene, providing a easier read for the audience. This is a good thing, or perhaps bad considering one’s point of view. 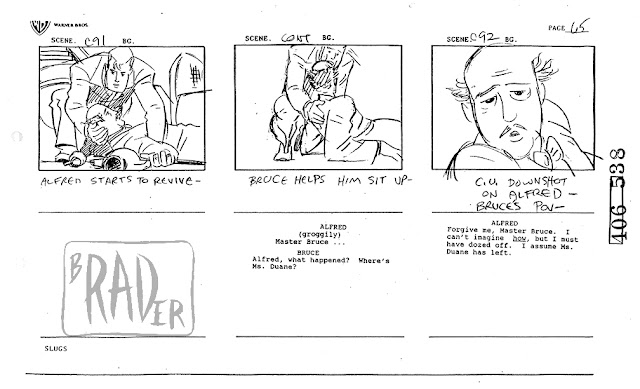 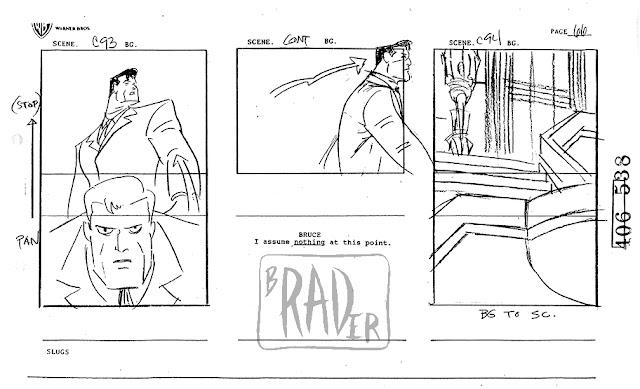 Note: I mistakenly mis-labeled (C94) as being a separate scene; it is actually intended to be the bg for scene (C93), drawn as a separate panel to be of maximum utility for the lay-out department.

Labels: "Area of Interest", "Heart of Steel" Part One Act Three, "Why is it So Hard to Remember What Happens in Transformers", Lindsay Ellis, The Batman Animated TV Series