"Heart of Steel", Part One, Act Three (Part One)

This is a post of storyboard pages 0 through 9. I drew this section.

Kevin Altieri drew the title page (as in, that’s his handwriting and his symbolic drawing of Randa Duane.) This is a bit of graphic joie-de-vivre on Kevin’s par, as the audience was (only) fellow workers on the series. 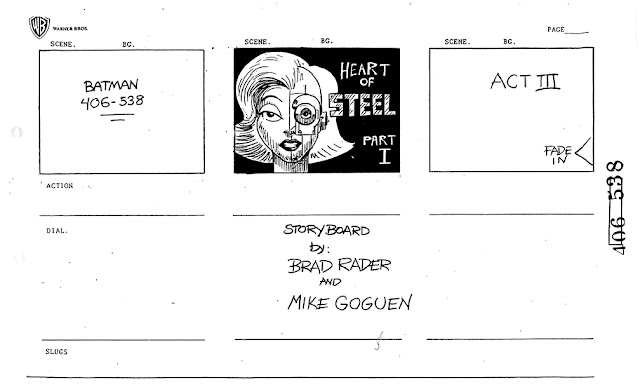 I mentioned in an Act One blog that one of the projects of this episode was to introduce Barbara Gordon in such a way to render it it plausible that she could become Batgirl in later episodes. This begins here, as she reacts to her father, Commissioner Gordon, suddenly going silent after  he leaves the room to answer the doorbell at the cliff-hanger ending to Act Two. 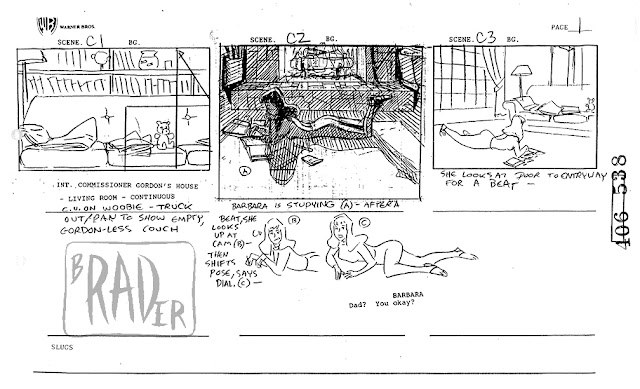 (C1) Close-up on Wooby, Barbara’s child-hood toy and signifier of C.G.’s emotional attachment to his daughter. We pan/truck out to show his position on the living room couch, still vacant of Gordon. This is a re-use of scene B118.

(C2) Cut back to scene B119, which was Gordon’s P.O.V. in Act Two. Here we flop the two shots, in the sense that B118 retroactively becomes Barbara’s P.O.V. in Act Three; B119 becomes the establishment of Barbara as the agent of action instead of the object of observation. I’m not explaining this very well; I mean that the nature of each scene flops between Act Two and Act Three, becoming alternating P.O.V. shots of both characters. Aagh! That’s not right either. 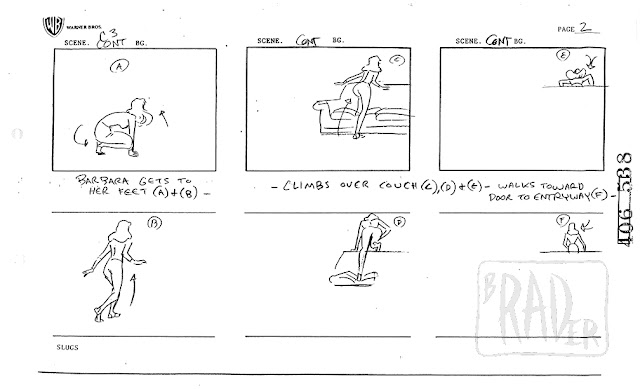 (C3) Re-use B120; in Act Two it was a scene of domestic tranquility,  now it isone of mounting tension and suspense.
I struggled with how to get Babs off the floor and out the door as she goes in search of suddenly-silent Dad. The couch, in Act Two, served the useful function of limiting the need for animation; here it was in the way. I got the brainflash to use it as a revealer of Bab’s character; instead of repeating her father’s walking out of frame and back into frame on the other side of the couch, she nimbly and without a second thought, climbs over it. I retroactively regret the sloppiness of my drawing of poses (E) and (F); she gets too small within the frame too fast. 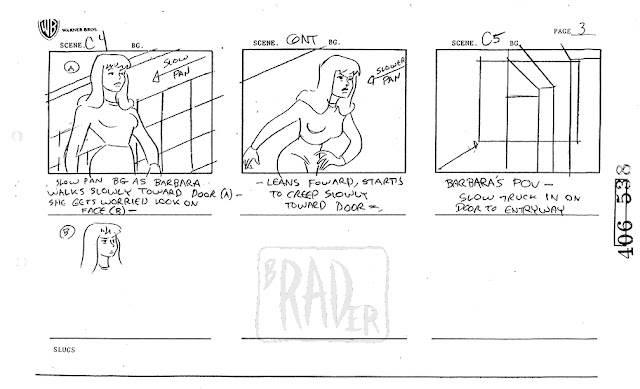 (C4) In the previous scene Barbara had been merely curious; now she’s starting to get anxious; W.T.F.?-dad-wise. Her posture shifts and her gait slows as she moves forward anticipating possible danger. See, I told you we were setting her up to be heroic. 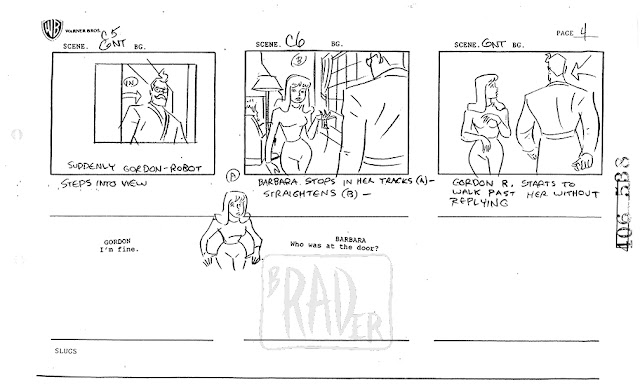 (C5) Barbara’s P.O.V., slow truck in on door to entryway— what will she/we see when she turns the corner? Suddenly, Gordon (his duplicant, actually) steps into view. 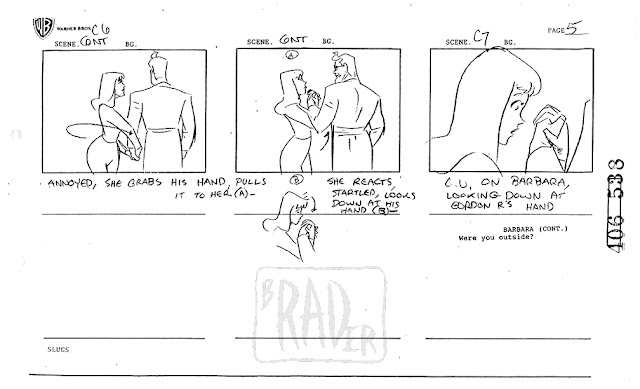 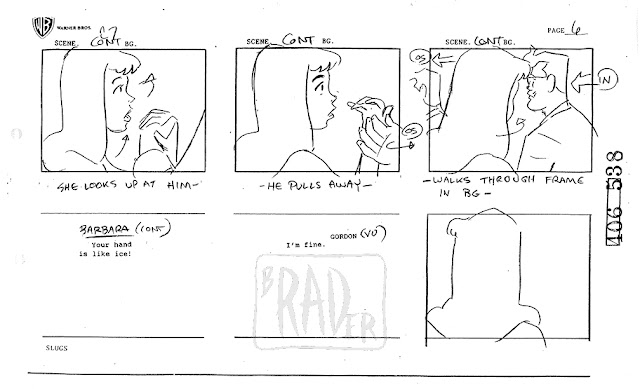 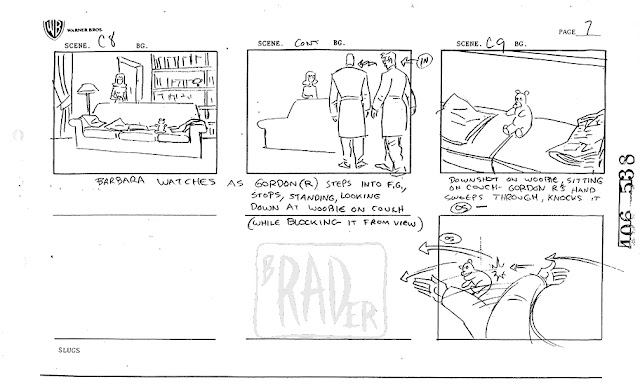 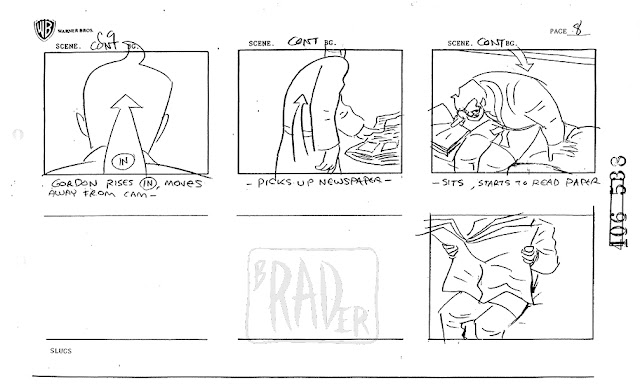 (C9) The duplcant unceremoniously knocks Wooby off the couch as he resumes his (Gordon’s) place. 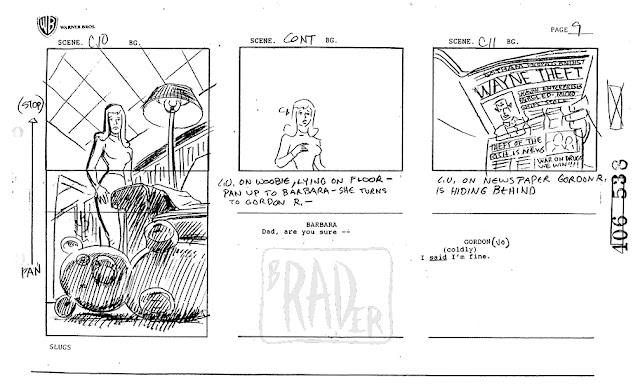 (C10) Close up on Wooby-on-the-floor; pan up to Barbara looking down at camera with continuing W.T.F.-ness. I imagine this got a big musical sting on the sound-track; if it didn’t, it should have. At least, I heard it in my head as I boarded this scene,

(C11) Close-up on the  newspaper, hiding Duplicant-Gordon from camera. I had fun with the head-lines. Again, I don’t recall how the prop of the newspaper was designed for air. I know, when working at D.I.C. in the 80’s, we had a mandate to avoid English language signage; I don’t recall the same restriction on Batman.
Posted by Brad Rader at 8:19 PM