I was originally inspired to re-draw the wrap-around cover to DC Superspectacular #1 (also listed as Flash #214) in 2007. As I recall, I was gearing up to commence work on the Fogtown graphic novel for DC Comics/Vertigo Noir and wanted to do something fun and mindless, a palate cleanser as it were, before starting such a major undertaking. 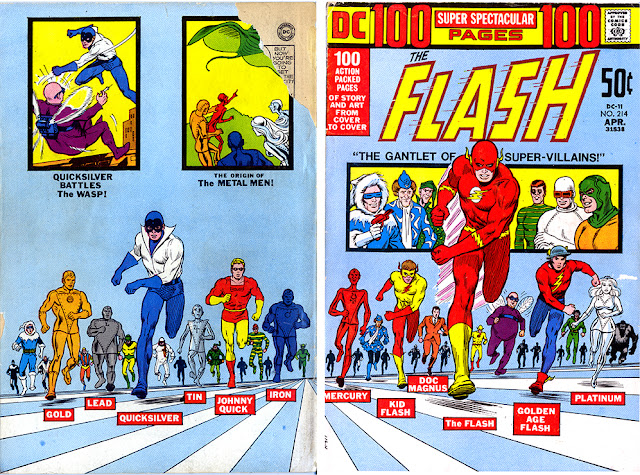 I wanted to “correct” one of the “mistakes” I perceived in the original Nick Cardy version: all the figures are running directly “at camera” even though the perspective lines on the low-angle ground plane radiate from a single (one point)  perspective in the center of the composition. I thought it would be cool and fun to subtly alter the angle on each character to conform with the radiating lines. 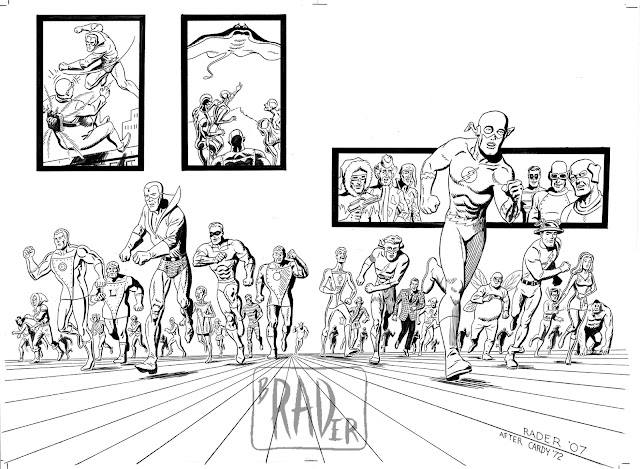 I also thought it would be fun to imitate the style of whichever artist drew the characters in the book’s interior. In the case of Flash and Kid Flash, I decided to cheat and imitate Murphy Anderson inking Carmine Infantino instead of the actual ink-artist reprinted there-in, Joe Giella. This was strictly a matter of personal taste on my part; Murphy Anderson is one of my all-time favorite comic-book inkers; Joe Giella is one of my all-time least favorites. The Golden Age Flash story was drawn by Infantino in his Caniff stage, so I imitated this for my re-draw, as far as the design for the character’s face is concerned. I don’t think the Metal Men figures look particularly like they were drawn by anyone but me, let alone the interior artists, Ross Andru and Mike Esposito. And that goes for all the other figures as well. 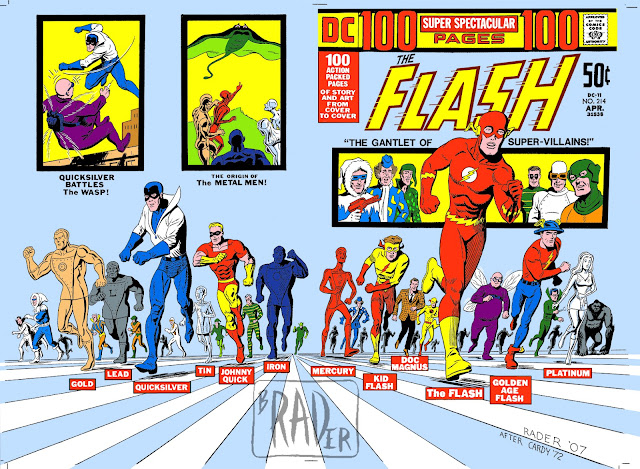 I am in the process of assembling material for my upcoming on-line portfolio site. Last weekend (Memorial Day Weekend, 2017) I came across my 10 year old drawing of this piece and decided it would look good as a part of my on-line portfolio. Originally I wanted to color and letter it in Photoshop but was too intimidated by that computer program to try. In the intervening 10 years, I’ve gained some chops so I decided to honor my original concept before putting it on my site. I’m including my original drawing and a scan of the original wrap around cover.

Posted by Brad Rader at 5:13 PM No comments: