Nothing in this batch sticks out as exceptional, so I'll just muse, generally speaking.

I'd love to know the work methods of John Prentice (the uncredited, assumed artist) on this story. What was the deadline? Did John have assistants? Did he do the inking himself?

This issue is (apparently) lettered using the Leroy mechanical lettering system. Was this dictated by the publisher, Dell Comics, or chosen by Prentice? I don't recall it being the Dell house style.

John is the artist who replaced Alex Raymond on the Rip Kirby daily syndicated strip. John, Alex, and Al Williamson (John's occasional assistant on Rip) are renowned photo-swipers, but I see no sign of it in these pages; the drawing is too consistent, and none of the characters seem individuated enough to be based off real people. Obviously I could be mistaken; I was recently blown away by archival proof that Milt Caniff, of all people, used live models when drawing "Terry and the Pirates".
Similarly, the backgrounds don't seem to be particularly photo-reffed; the artist(s) appear(s) to be working largely from memory, throwing it down as quickly as possible. This is not a critique, merely an observation. One of my quests as an aspiring artist was to figure out how my heroic predecessors "did it". Often the answer is, "as quickly as possible". On the other hand, frequently the answer was, "through untold hours of grueling unseen effort" (as in, "making it look EASY is REALLY HARD"). 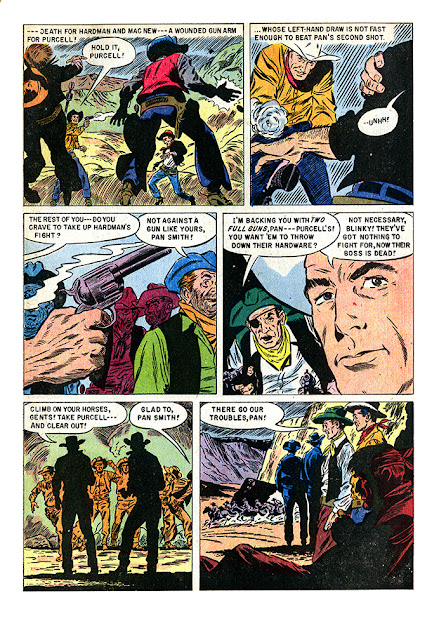 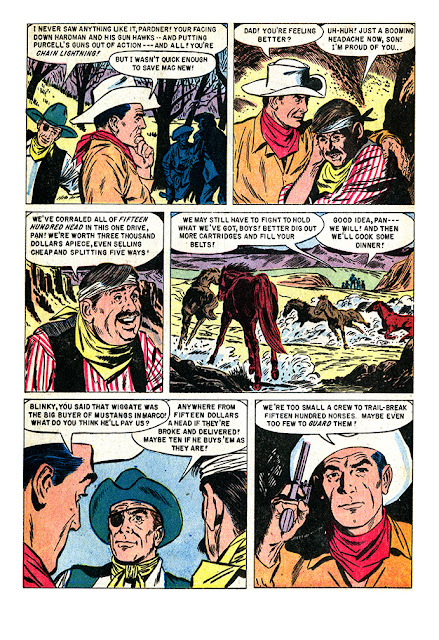 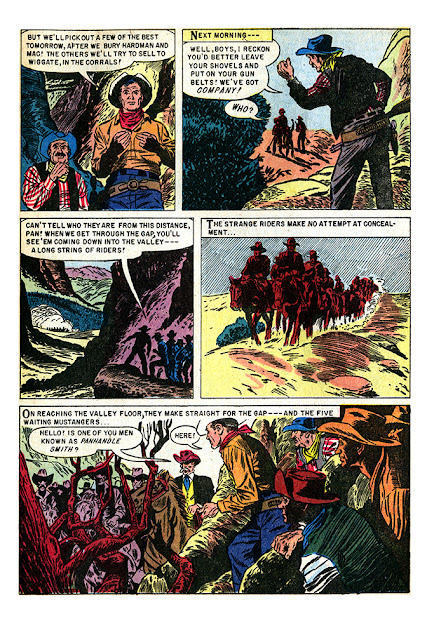 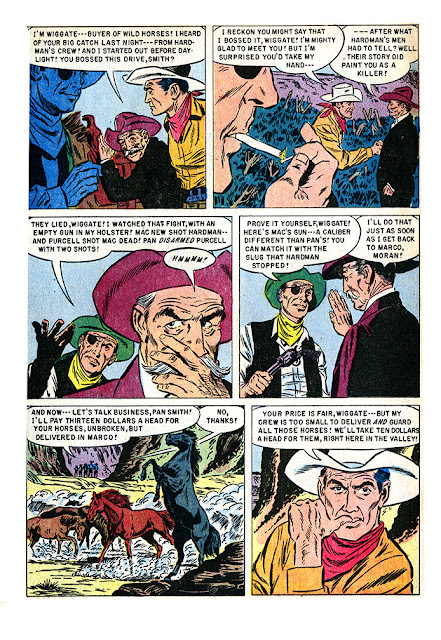 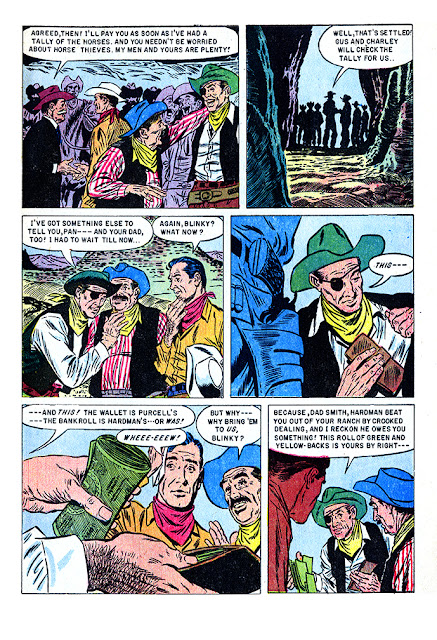 Page 21, Panel 3: I’d assume no photo-ref on this panel. Perhaps the artist held a Colt Revolver in his left hand and drew it with his right, but everything else looks to be “from memory”. 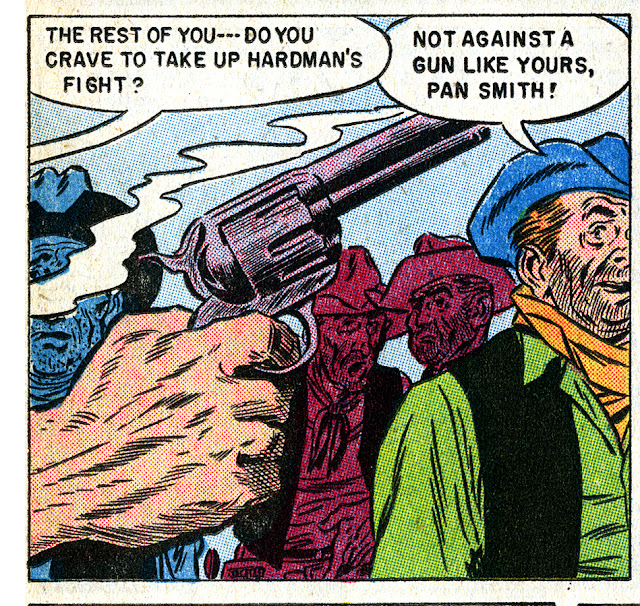 Page 23, Panel 1: This BG is probably “from memory”. Once one has the basic forms down it’s a snap to greek in this sort of thing. 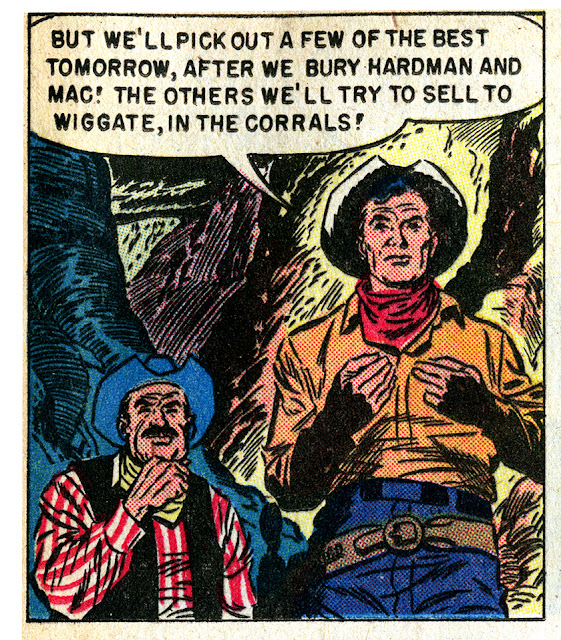 Page 23, Panel 3: Back before Image Search on the World Wide Web, cartoonists had to collect “Morgues” of photos (or artworks by others) for their pictorial reference. It is therefor unlikely that Prentice had anything close to this exact composition, especially since it seems to exactly match the needs of the narrative and the overall page design. Elements of the panel may have been cribbed from diverse photos, however. 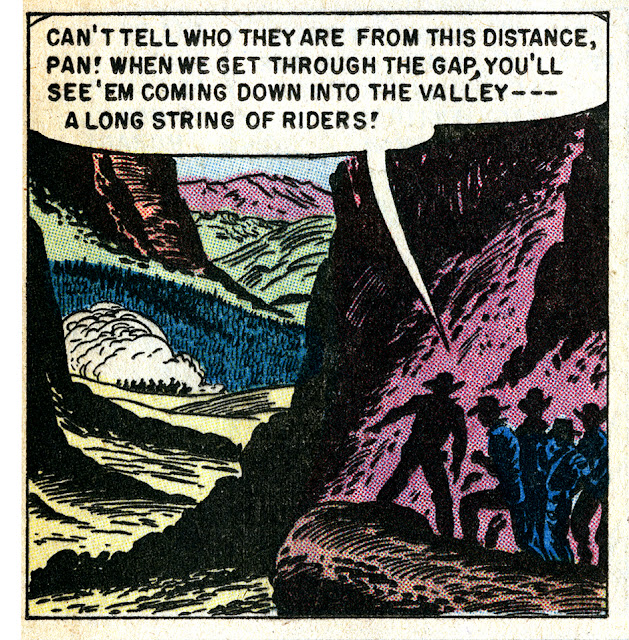 Page 23, Panel 5: Ditto on this panel; there’s nothing here that has the verisimilitude to suggest that it was drawn from either a photo or a posed model.

This is a continuation of the serialized posting of the artwork from the pages of Zane Grey’s Stories of the West #27, published by Dell Comics in  1955. It features the story “Zane Grey’s Roundup”, “A Pictured Edition of “Open Range”. In this post I present pages 21 through 25.

I am assuming the artwork presented here is by John Prentice, who took over the “Rip Kirby” syndicated newspaper strip after the creator, Alex Raymond, died in a car crash in 1956, though I can find no confirmation of that in my on-line search.