The episode was written by Len Wein, creator, along with Bernie Wrightson, of  “Swamp Thing”.

This episode was a homage to the films of Alfred Hitchcock, especially “Vertigo”. The main villain, in fact, is named “Vertigo”. Certain shots directly reference that movie; I’ll point them out when the time comes. This sequence obviously references “Saboteur”, a Hitchcock movie from 1942, in which the movie’s climax is staged on the Statue of Liberty. I rented the laser disc of “Saboteur” and spent an evening sketching freeze frames in preparation for this storyboard.

Actually, another movie reference isn’t Hitchcock at all, but John Schlesinger, specifically his film “Midnight Cowboy”. The incidental character “Twitch” is based off of Ratso, played by Dustin Hoffman in the classic from 1969. I was working ahead of the character designers on this segment of the storyboard, so what you see here is my design, drawn from my memory of the movie (I didn’t bother doing research).

Also, I want to point out that I inked this storyboard, something I hadn’t done since my first job, in 1983, storyboarding at Ruby Spears on “The Puppies New Adventures” and “Rubik’s Cube”. At that time I was trying to emulate my Director, John Dorman, and my fellow board artists Thom Enriquez, Jim Woodring and (? there was a third staffer, but I’m blanking on his name) (Dan Riba was hired at the same time as I, for his first job in the business as well, but he doesn’t count; he was my peer, so I wasn’t trying to emulate him, even though he knew more about animation, and drew better than I). I gave up inking boards soon after, finding it too intimidating. By the time I started this storyboard, in 1991, I had 8 years of 50 hour work weeks to develop my drawing chops and was starting to find rendering black areas with pencil annoyingly time consuming. So why not just go in with ink? Or, in this case, a Pilot Pentel (for the lines) and a Japanese fountain brush pen (for spotting the blacks) ? If you go back to yesterday’s post, you can see exactly where I made this transition, between pages 3 and 4. The halftone areas were rendered with black Prismacolor rubbed over the art paper while sitting atop the back of a masonite board. This technique was innovated (as far as I know) by ether Bruce Timm or Eric Radomski as a way of generating halftones that holds up well over multiple generations of re-copying. 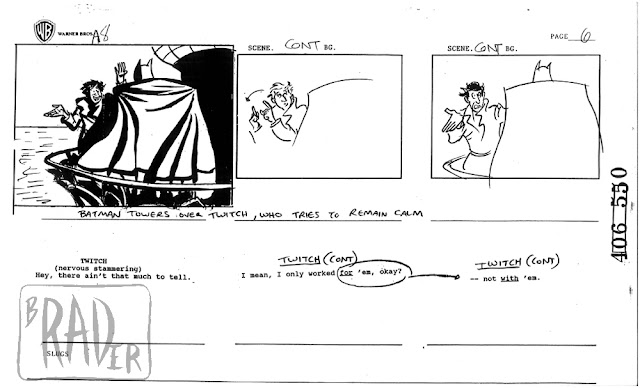 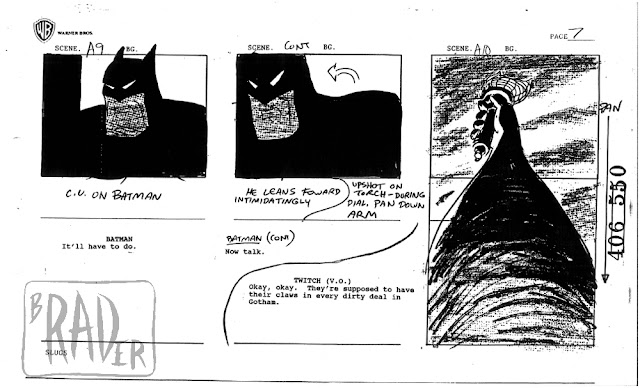 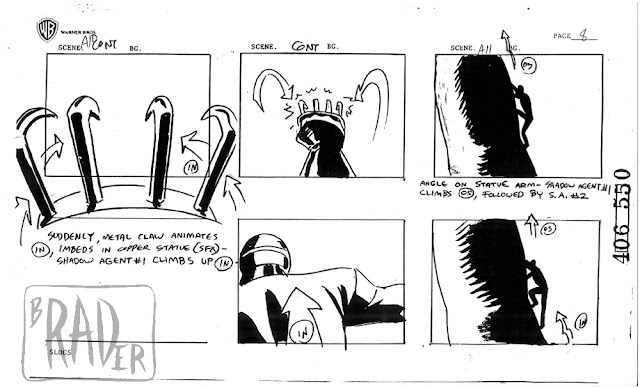 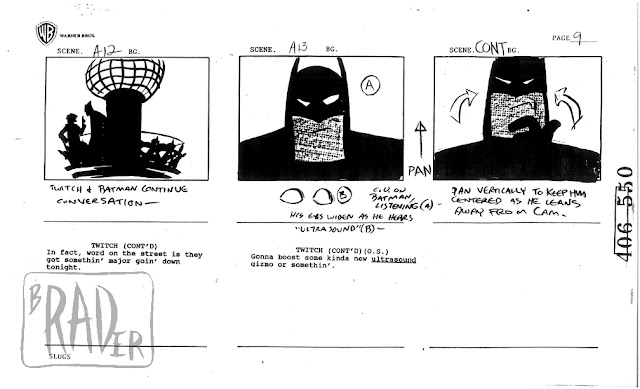 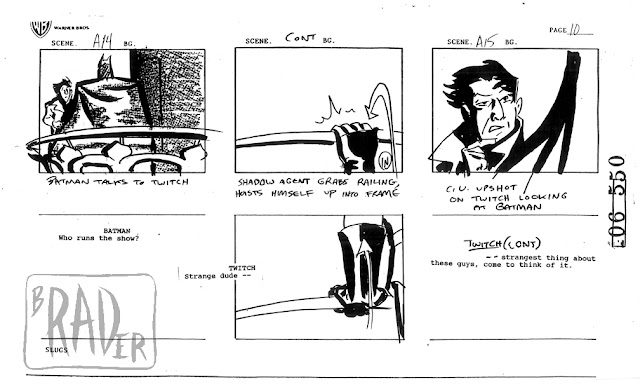