This is my most recent acquisition of original artwork, won on December 16 in auction at Heritage Auction. The hammer price was $100. The artist is Luis Dominguez, the page is #28 from Four Color Comics # 1255, “The Wonders of Aladdin”, published by Dell  Comics in 1961. Apparently it is an adaptation of a movie by that name. 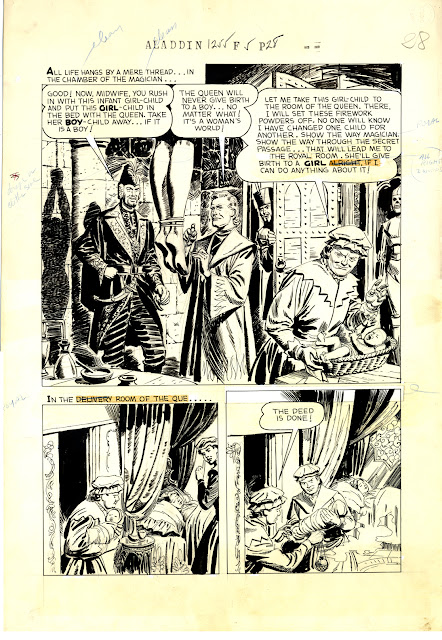 To quote Lambiek.net, Luis was born in 1923, in Argentina.
“Luis Angel Dominguez is an Argentine artist, who has worked a lot for American horror and mystery comic books in the 1960s and 1970s. He has made comics in his native country since the 1940s. He has cooperated with the writer Hector German Oesterheld on 'Scout River' in 1956. He also worked on comics like Patoruzito and Pancho Lopez. He did his first US works in the early 1960s, contributing to 'The Wonders of Aladdin' (Dell) and 'The World Around Us' (Gilberton).
Between 1963 and 1970 has was affiliated with the Union Studio in Latin America. He did back-up features for Charlton and drew for many of the company's 1960s war and western titles, such as 'Cheyenne Kid', 'Fightin' Marines', 'Billy the Kid' and 'Outlaws of the West'. From 1967 through the late 1970s, he did a lot of work for Gold Key titles like 'Ripley's Believe it or Not', 'Boris Karloff Tales of Mystery', 'Grimm's Ghost Stories', 'The Twilight Zone' and 'UFO Flying Saucers'. Then in the 1970s, he also began working for DC, illustrating for 'House of Mystery', 'House of Secrets', 'The Witching Hour' and 'Jonah Hex'. He additionally contributed to the horror publications of Skywald and Warren. 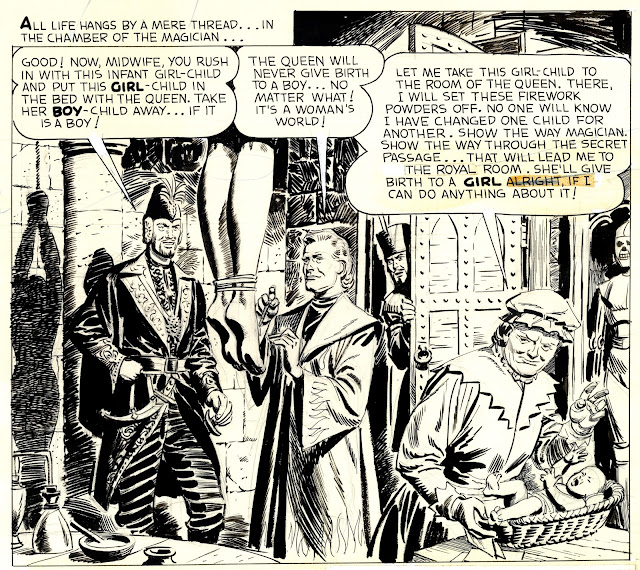 I appreciate him for his inking ability, which has excellent variety of strokes and textures, is pleasingly detailed while retaining an impression of speed and freshness. In panel #1, I like the way he uses “eye-read” to lead the eye from the upper-left caption to the baby in the lover right corner. My one quibble is that the shadow of the hanging woman isn’t higher in the frame (so that one’s eye would go to it first after reading the first word balloon.