I’m continuing to post, in serialize fashion, the rough pages, along with the final printed pages (and the original if I have them) to my three issue run on Batman Adventures. Today we’ll look at pages 9, 10, 11 & 12  of Batman Adventures #6, published by DC Comics in March 1993. The Story is called “The Third Door”, and it’s written by Kelly Puckett, pencilled by me, inked by Rick Burchett, colored by Rick Taylor, lettered by Tim Harkins and edited by Scott Peterson.

I call pages 9 through 12 “ The Bruce Wayne Prison Rape Sequence”.

Jail is an inherently dramatic setting; the bars of the cell are easily manipulated for impressive graphic effects that can be used to create frames with frames, especially if one employs a chiaroscuro design strategy. If I may say so, I used all of these elements to great effect here. 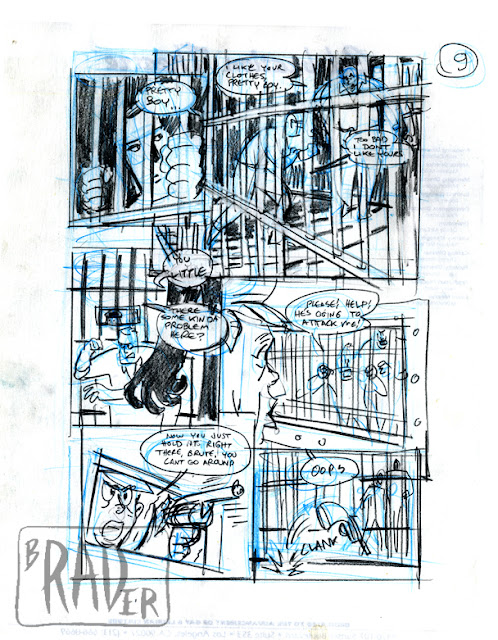 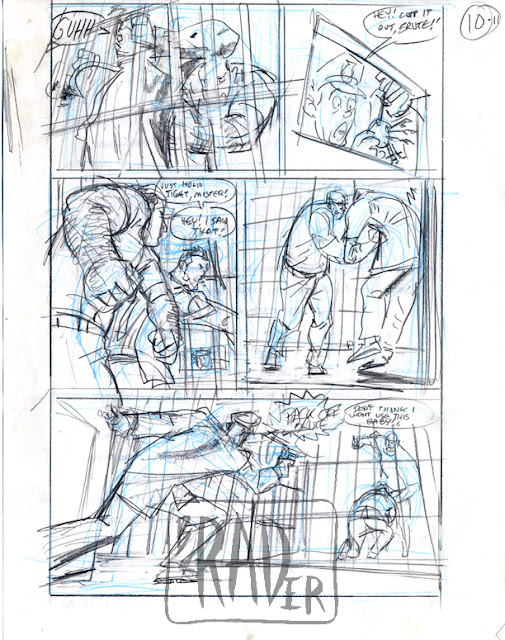 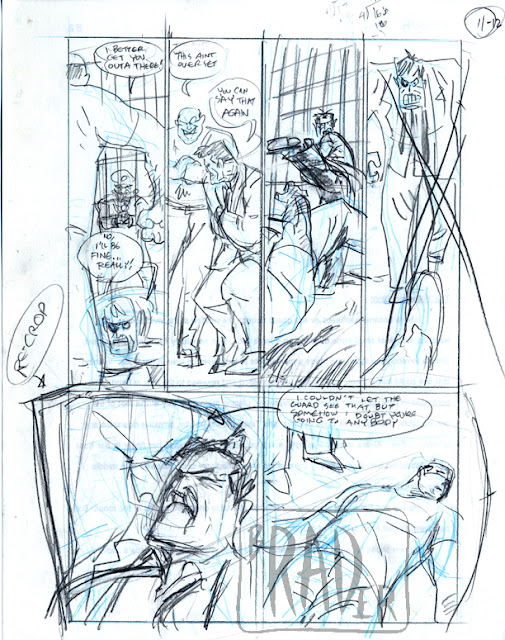 As one can guess from observing the differences between the roughs and the printed pages, I did much experimentation and trial-and-error in the layout stage. I ran into contention with both the editor, Scott, and the writer, Kelly.

I recall a phone conversation with Scott where he blew up at me for not following the script. I kept my cool and was able to talk him down, saying that, as a storyboard artist for TV animation (i.e., a filmmaker), I could do cinematic comics for him in a way that nobody’d ever tried, but needed room to maneuver. He bought it, allowing that his training as an editor came from Denny O’Neil, who was all about the primacy of the script (ironic because Denny rose to fame writing for Neal Adams who was notorious for taking liberties with the writing). Scott said he’d let me play things my way. 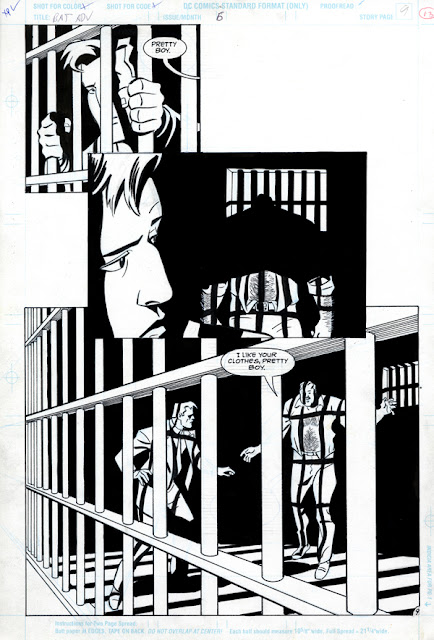 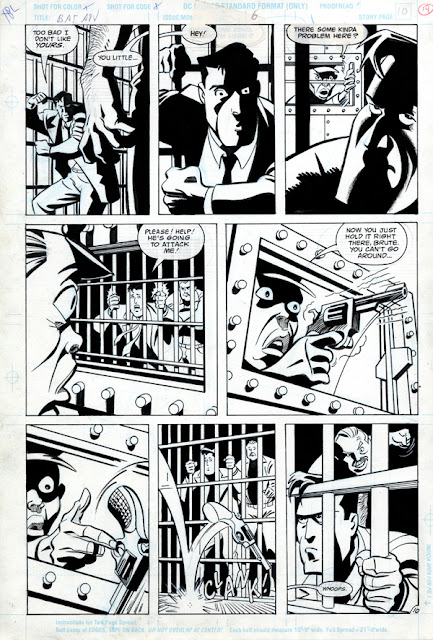 Then I had to negotiate with Kelly, who objected to my interpretation of Bruce on page 11/12 (i.e., having Bruce react with outrage to being sucker-punched and having to struggle for self-control after subduing “Brute”. Kelly was a martial artist and insisted that Bruce (a trained martial artist) wouldn’t react angrily. I saw his point but objected to the script, which described Bruce as having to land two blow to take out his assailant. This struck me as overkill, almost bullying on Bruce’s part. 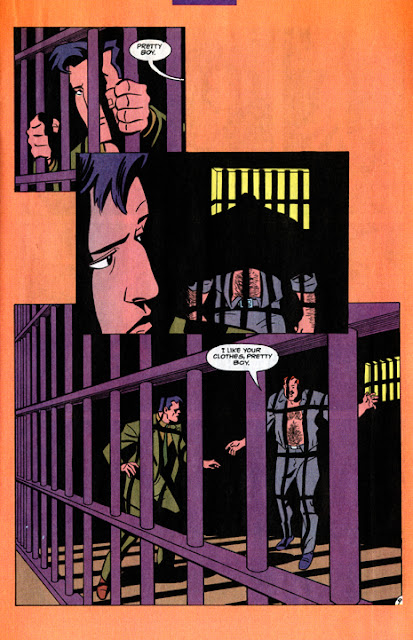 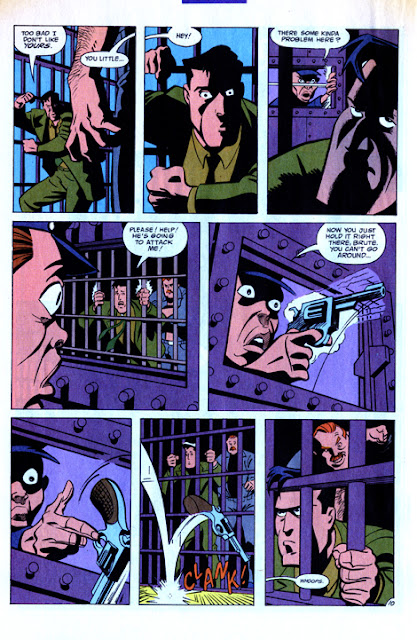 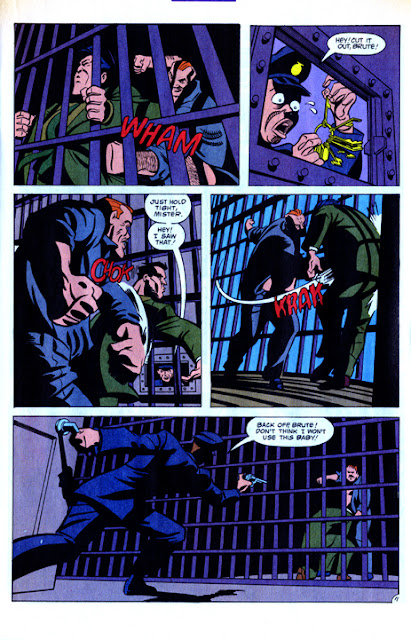 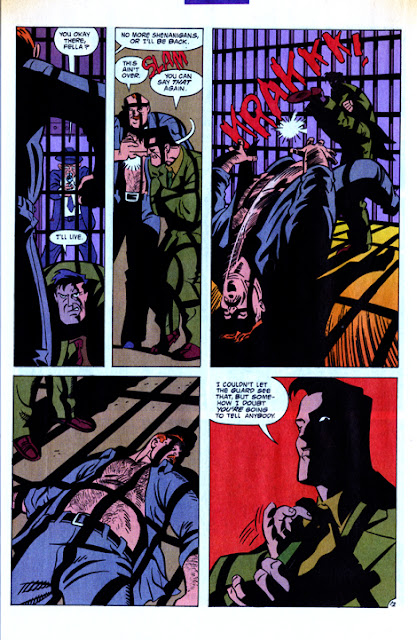 My only regret in this sequence is on page 12, which needs an additional panel between panels 1 and 2 showing the prison guard departing so that Bruce can kick the shit out of “Brute” unobserved. We tried to cover for this by adding a “SLAM” SFX blurb. It’s lame, but sort of works if one is in a forgiving mood.