I'm posting (continuing over the next 8 days) scans of my original artwork for “All-Crime Comics #3, which was published by Art of Fiction Press in 2014. I’ll be posting my version of the color art alongside the black and white. The publisher decide not to use my coloring.

This is page 30 from the story, “Hat Trick”, the third installment in a story continuing from “All Crime Comics” #1 and #2.

This page continues the cross-cutting started on page 29 between Dodger and Carla in the skybox of the “TerrorDome” arena in South Africa, and Marko and Tracy escaping from arena security and fleeing through the stadium crowds for the (they hope) safety of the skybox. Things heat up hear as the victim of Dodger’s attempted sting, Ruslan Solniev, looks “at camera” in panel 4, clearly (I hope) seeing us (Dodger) spying on him. In panel 5, we get Dodger’s “oh shit” reaction at being caught. 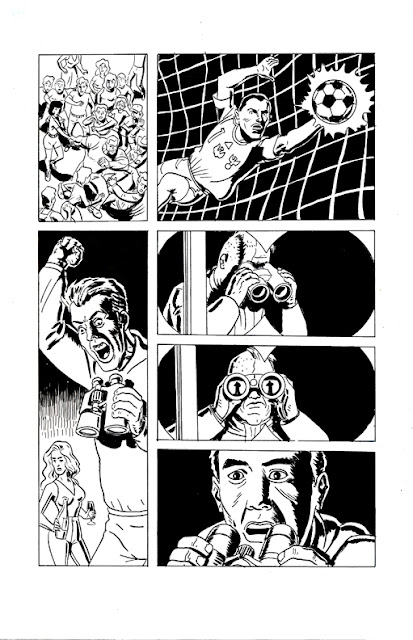 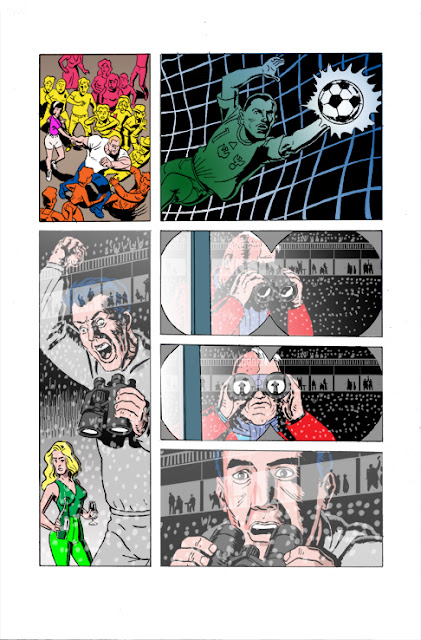 I’m heavily influenced by Alfred Hitchcock. I’m fascinated by his use of POV shots. This entire Dodger/Solniev sequence was very pleasurable for me, except that I ran up against my extreme limitations as a Photoshop colorist.  I drew the sequence knowing that I I would be laying in the reflections on the foreground skybox windows in the coloring stage, but was unsure exactly how, finding my way as I went. I ended using a very stylized approach; the skyboxes on the opposite side of the area are lit inside, allowing us clear silhouettes of the distant figures  there-in. The opposite would be the case in real-life; the skyboxes interiors would be dark, with the inhabitants being light-against dark silhouettes, if they could be seen at all. But I also wanted the portray the crowd in the stands as white dots on a black BG, so I had compromise by making the skybox windows light in order for them to “read”.


Also, I think I missed a bet with panel 6; it would have been much cooler if I’d shot Dodger full frontal, looking directly “at cam” and had the distant reflection of Solniev’s silhouette over Dodges face (echoing panel 5). Sigh.
Posted by Brad Rader at 3:33 PM