I designed Tracy for the story, “Hat Trick”, which appeared in the story, “Hat Trick”, from “All Crime Comics #3, published by Art of Fiction Press in 2014. Actually, that statement is inaccurate. Tracy had already been designed; she is the mascot for “The House of Secrets”, the comic book store in Burbank, California, USA where I buy my weekly comics stash. I had about 4 house ads and  poster designs that I worked off for this story. As with the other cast members, (Dodge, Carla, Maddy and Ruslan) I didn’t do formal models as work directly from photos of stars suggested by the writers. This was probably a bad strategy on my part, as I’m fairly unhappy with the drawing I did of those characters for this story, especially Dodger, who doesn’t look like Clive Owen (the actor in mind) or much of anything.

I did this drawing a couple weeks later than those posted previously. It’s not so much a design as an attitude drawing. It’s different than how I portrayed her in “Hat Trick”; based on closer study of the source ads and posters, she became more angular, slightly gawky than here, where she’s more zaftig, curvy. 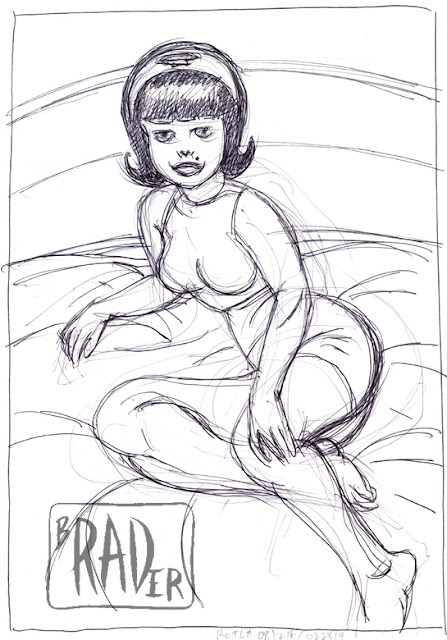