COUNT DOWN! Only 3 days to go until the August 14th San Fernando Valley Comic Book Convention. I’ll be sitting all day at an Artist’s table, selling copies of my published work, original artwork and commissioned sketches. In an attempt to generate interest in my upcoming appearance  I’ll be posting (over the next 3 days) scans of my original artwork for “All-Crime Comics #3, which was published by Art of Fiction Press in 2014. I’ll be posting my version of the color art alongside the black and white. The publisher decide not to use my coloring. If you want to see the published version, come visit my booth at The San Fernando Valley Comic Book Convention in Granada Hills, on August 14, 2016 and see for yourself.

This is page 36 from the story, “Hat Trick”, the third installment in a story continuing from “All Crime Comics” #1 and #2.

Tracy  calls out to Marko, seen hobbling to some unknown destination in the parking lot below.Too bad he didn’t hear; if he’d looked back he might have seen the approaching SUV full of surviving members of the Solniev gang. They catch Marko  unawares as they drive past, finishing the job of their deceased compadres.

The page ends with a close-up on Tracy; is she looking at Marko’s corpse or the key he gave her on page 33? Whichever it is does not induce her to further tears. 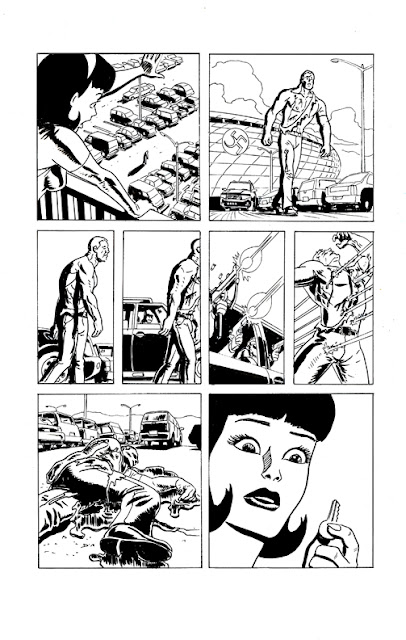 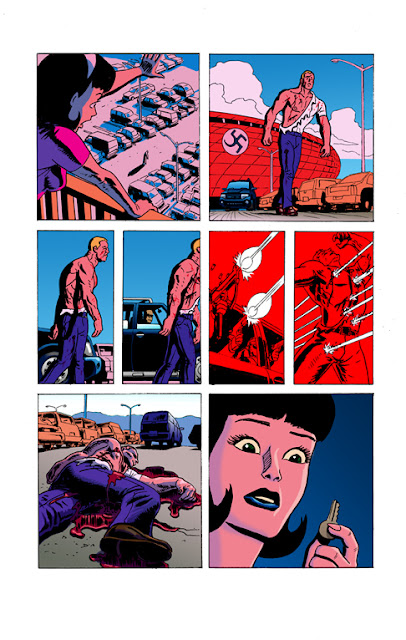