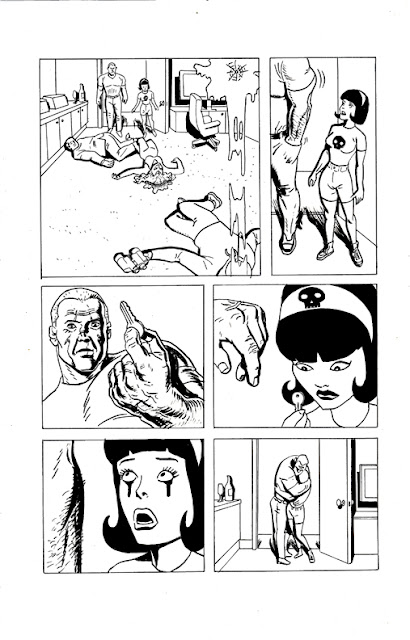 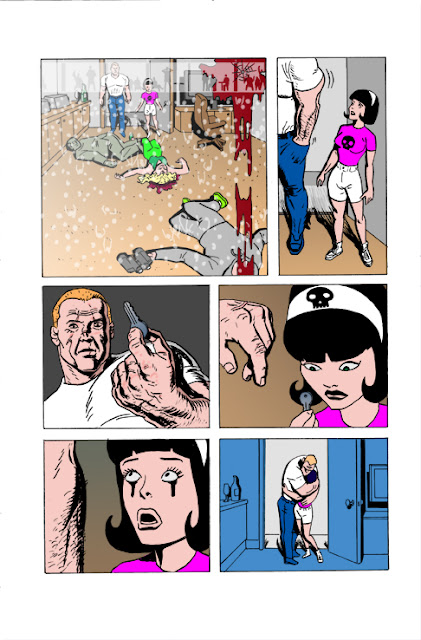 COUNT DOWN! Only 5 days to go until the August 14th San Fernando Valley Comic Book Convention. I’ll be sitting all day at an Artist’s table, selling copies of my published work, original artwork and commissioned sketches. In an attempt to generate interest in my upcoming appearance  I’ll be posting (continuing over the next 5 days) scans of my original artwork for “All-Crime Comics #3, which was published by Art of Fiction Press in 2014. I’ll be posting my version of the color art alongside the black and white. The publisher decide not to use my coloring. If you want to see the published version, come visit my booth at The San Fernando Valley Comic Book Convention in Granada Hills, on August 14, 2016 and see for yourself. Archives of this blog can be seen on my website, www.raderofthelostart.com

This is page 33 from the story, “Hat Trick”, the third installment in a story continuing from “All Crime Comics” #1 and #2.
FINALLY, in panel 1, I did what I should have done on the previous 2 pages, i.e., put the reflection of the opposite side of the arena  on the f.g. window pane (including the reflection of Solniev’s skybox in the upper center of the panel, with Solniev’s  silhouette looking “at cam” with binoculars. This shot become’s Solniev’s POV, even though I didn’t superimpose a binocular matte).


Marko and Tracy stand over the corpses of her mother, Carla, her mother’s boyfriend, Dodger, and Thug #3.  Marko hands Tracy the key to the locker where Dodger stashed the winnings, thereby financing Tracy’s further adventures (not yet written as far as I know). Tracy doesn’t cry until she has to say goodbye to Marko.  Very strange, but who can figure kids these days, especially little sociopaths.
Posted by Brad Rader at 7:00 AM