I'm posting (continuing over the next 14 days) scans of my original artwork for “All-Crime Comics #3, which was published by Art of Fiction Press in 2014. I’ll be posting my version of the color art alongside the black and white. The publisher decide not to use my coloring. If you want to see the published version, come visit my booth at The San Fernando Valley Comic Book Convention in Granada Hills, on August 14, 2016 and see for yourself.
These are pages 8 and 9. 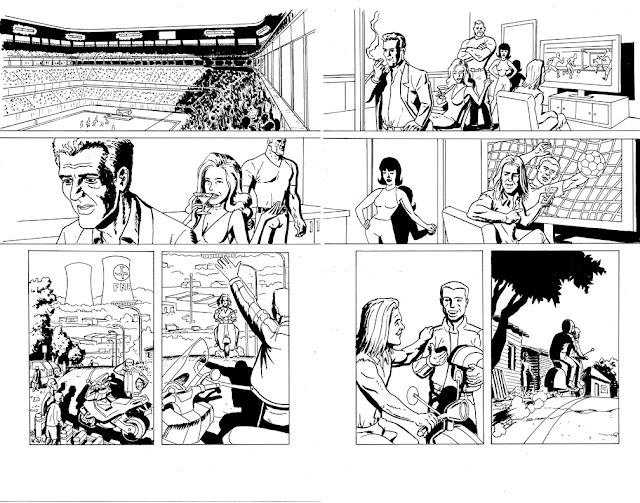 The story is entitled “Hat Trick”, and it is the third installment in a story continuing from “All Crime Comics” #1 and #2.
Panel 1 is meant to be a double page spread “pan” from an exterior shot of “The TerrorDome” to the interior of the skybox, where Dodger (modeled off Clive Owen), Carla (modeled off Diane Lane), Marko, (modeled off depictions of the character in All Crime #1 and #2), Tracy (modeled off the store mascot for Secret Headquarters in Burbank, California, USA where I get my weekly stash of comics), and Maddy (based off Christian Kane) watch the World Cup Soccer match between the Soviet/German and Whatever Team They’re Playing Against in this game.
Panel 2 is another double page pan across each character in turn as they comment on various aspects of their situation at this point in the narrative, hopefully being witty, entertaining and advancing the plot. The “Pan” ends on Maddy, freezing the action on the TV monitor to point out the Russian goalie he had interacted with in the dive bar the previous night.


Panels 3 through 4 take place in the Afrikan Ghetto, where we see that the Russian Goalie’s motorcycle has broken down. Maddy conveniently rides up, offers his recently acquired friend a ride. Off they go into the sunset. Needless to say, the goalie won’t be appearing in tomorrow’s game. 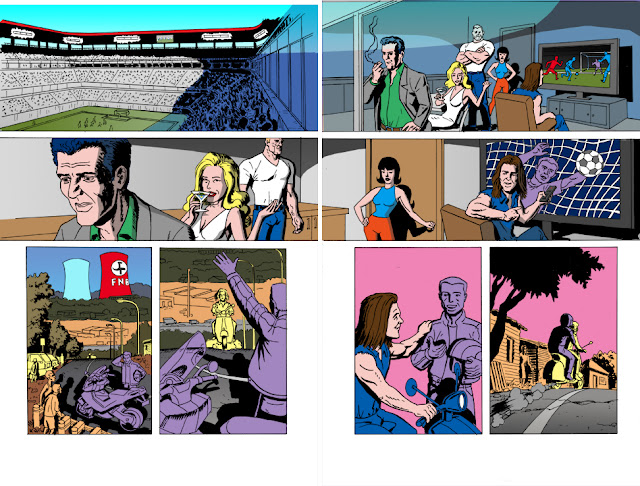