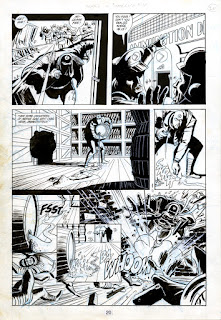 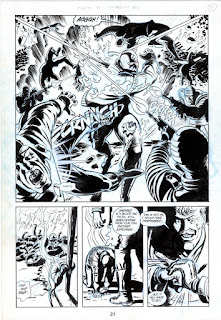 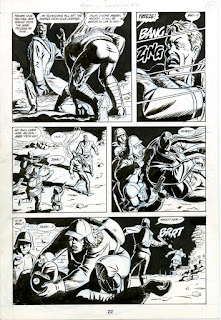 Here it is, what the entire series has been building towards since The Mark, Volume 1, issue 1. It’s what we’ve all been waiting for (LOL), the death match between The Mark and The Archon… and it’s thwarted by Special Agent Pierce, Lisle and Scrub. Talk about fight-us interruptus. And Mike (Mike Barr, the writer of “The Mark in America”) called ME “arch”. There’s nothing I could do to top THAT. 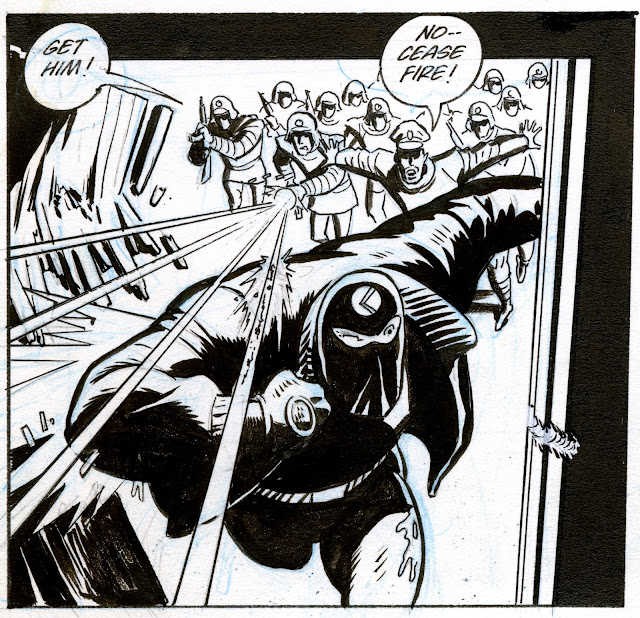 Page 20, panel 1: The Mark bursts into scene, shattering a wooden door with his shoulder, being fired on by a crowd of hostile soldiers. 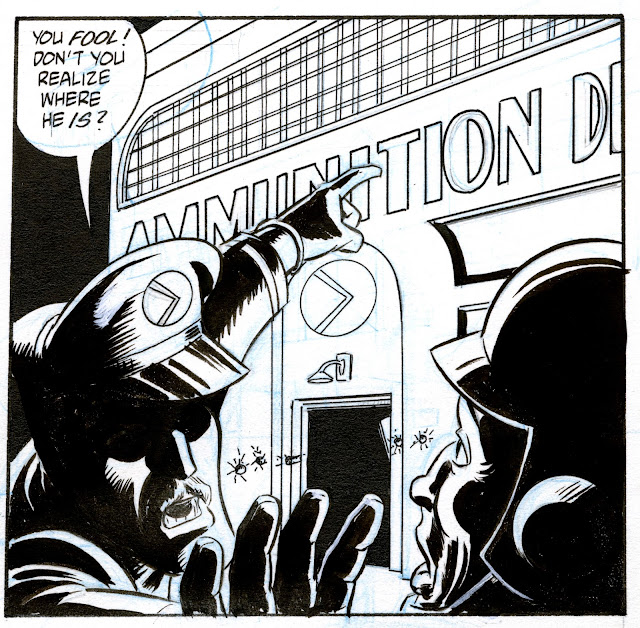 Page 20, panel 2: a commander orders a soldier to stop firing as it may set off the explosives inside what we now see is an ammo dump. Of course we could see it better if the commander's hand weren't partially covering both the signage on the building facade and the shattered doorway the Mark entered through in panel 1. My bad. The problem could have been easily solved if I had shrunk the commander by a third and moved him slightly left. Perhaps I'll do just that if "The Mark in America” has a second printing.

Page 20 panels 3 & 4: The Mark finds momentary refuge in the ammo depot and immediately sets to work trying to blow the whole thing up, spreading a trial of gunpowder from a barrel of the same, lighting it... 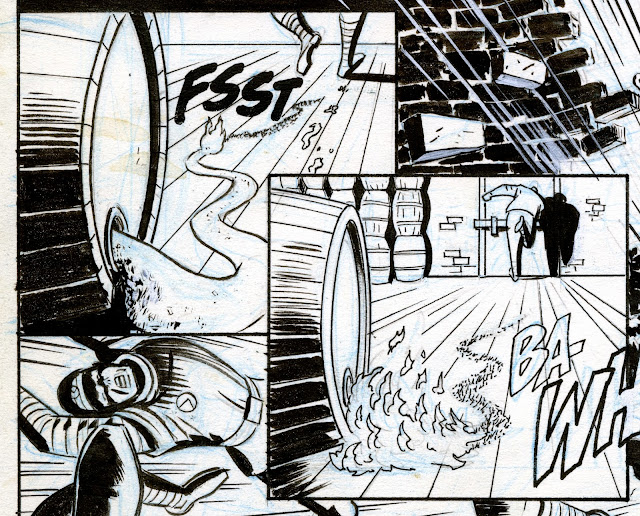 Page 20, panels 5 and 6: ...and runs for the exit, running for the exit misjudging how long it will take the gunpowder trail to burn (he's only human, after all, even if he is super). The flame reaches the barrel and we scan right to the “BA-WHOOM” sound effect, which carry the reader into… 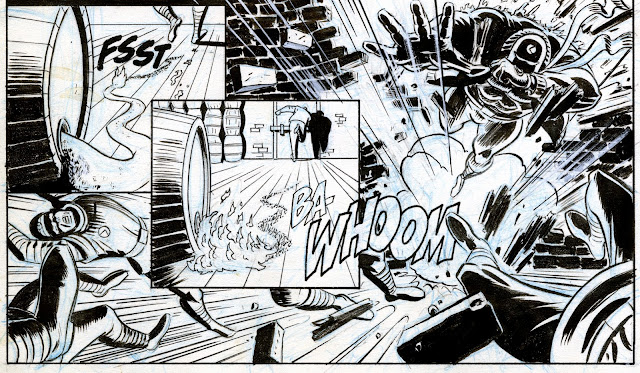 Page 20, panel 7:  the center of the explosion that blows The Mark out of the of the ammo dump through foreground soldiers, whom are also being hurled toward and past camera. I must confess that I find panel 7 rather inelegant in terms of its use of eye-read. We enter the panel at the sound effect, are carried immediately down and right by the f.g. soldier’s leg, jump upward to catch The Mark. That’s all good, but then we notice, off to panel left, on the other side of panel 6, a glimpse of three more explosion-flung soldiers. I had originally, set up panel 5 to go to the bottom of the page and decided including more soldiers was necessary and worth the graphic clumsiness. 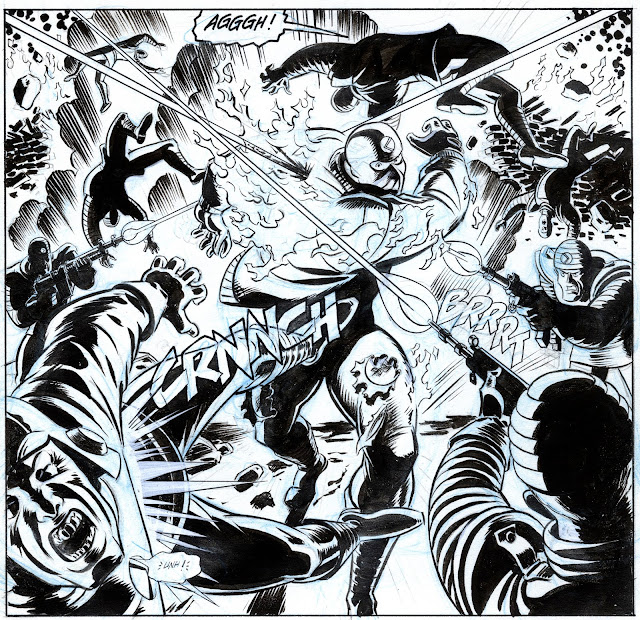 Page 21: The exploding ammo dump on page 20 has the beneficial effect of dramatically igniting the back of The Mark’s leather jacket as he demolishes the rest of the Archon’s troops. Mike’s plot outline called for many small panels each one of the Mark dispatching an individual (or small group) of troops in whatever imaginative way I could devise. I was deep in my Kirby phase, so I did it all in one large panel instead. Page  21, panel 1 is my attempt at a Jack Kirby action full-pager. My main regret is that the letterer ran the “CRNNCH sound effect over the foreground soldier’s leg. I tried to compensate by inking through the lettering, which I despise when other cartoonists do it. Oh well. One thing I’ve learned, its never say what you WONT do because, sooner or later (usually sooner) you’ll be called upon to do exactly that. 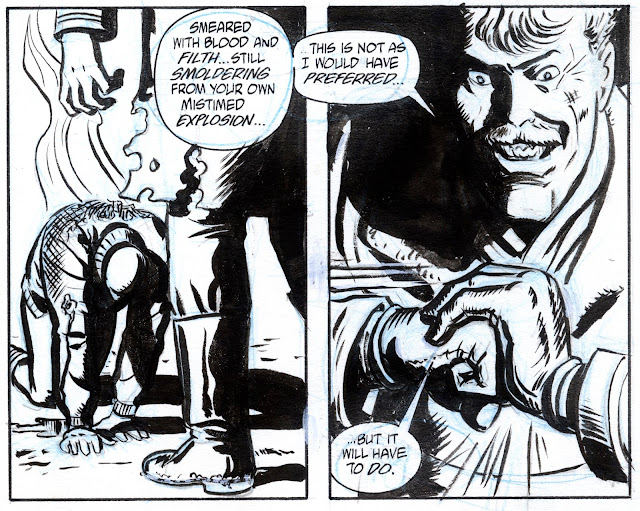 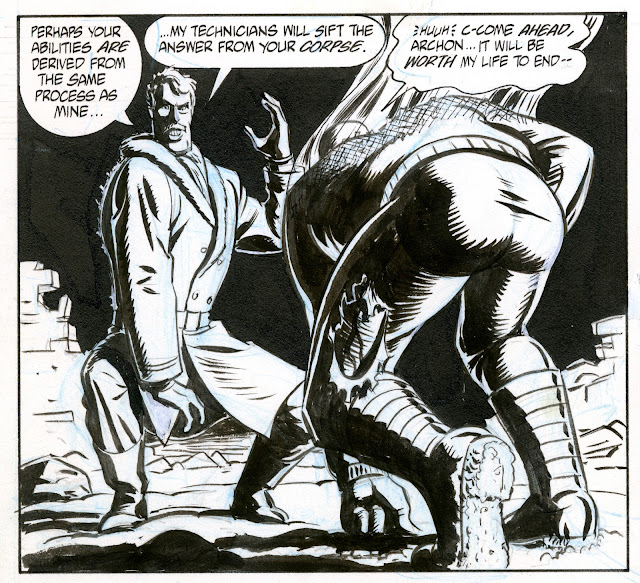 Page 22: …And it’s a bust. In panel 1 The Archon strikes a martial arts pose I learned from Tim Gula (a fellow animation and comicbook artist who studied a new defense method every year). He told us (my fellow TV Animated Batman artists and I) it was Philippine martial arts, possibly called Selot or Sillot or something like that, but I can’t find it online, so either I mis-remember or Tim was pulling our collective leg. Or maybe it’s an Aikido pose (I took Aikido for a few years around this time.) 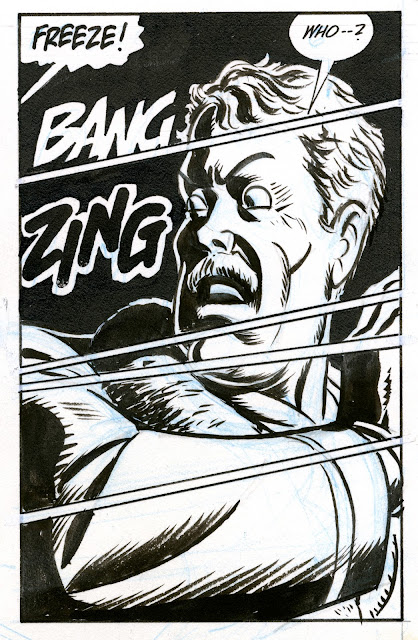 But I digress. The Archon is fresh and ready to kick the remaining shit out of his archenemy. It might have been an interesting fight, but it is immediately interrupted by warning shots from The Mark’s posse (panels 2 & 3).

Panel 5 is my favorite on page 22.  The Mark’s unconscious, supine body works well with the left-to-right, up-to-down eye read, leading us down from Scrub, looping around to pick up Lisle, then sweeping us back up (that relaxed, inert hand is just TOO tasty) to S.A. Pierce as she ineffectually sprays some rounds at the retreating Archon.