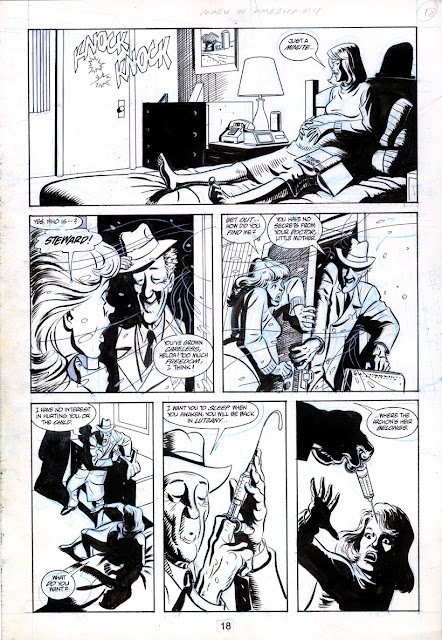 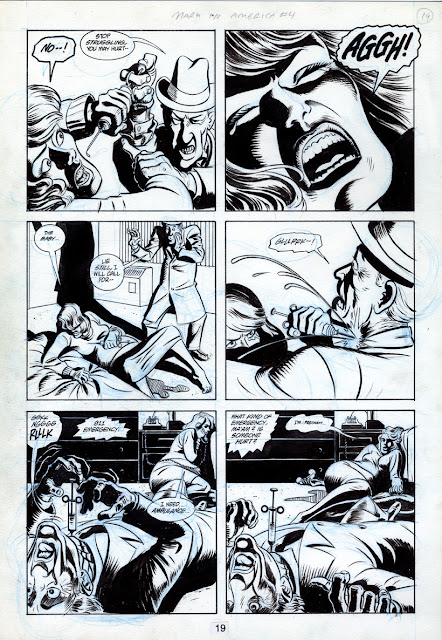 This two page sequence is the climax of the Helda /Dr. Steward story arc.
Parallels with the nativity are too obvious to ignore. I regret placing Helda in a proper motel room; it preferably should have been a linen or janitor’s closet (or the service vehicle garage. Shit! I only thought of it just now; that would have been great!), except there probably wouldn’t have been enough room for the action to play out.
Overall, I like the lighting; sourcing it from a single lamp next to the bed allowed for good dramatic effect, and also helps orient oneself spatially in the room. 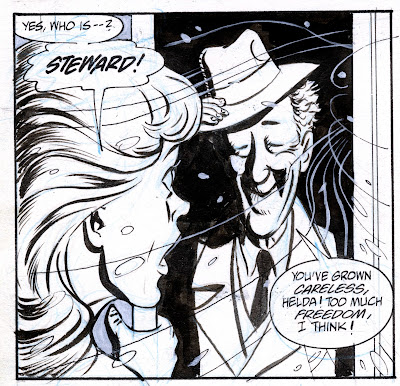 I was going for a somewhat incongruous effect: Doctor Steward’s visit is an attack (sort of like Dustin Hoffman’s “visit” with Lawrence Olivier in “Marathon Man” even though, on page one, he is trying to play the role of Kindly Doctor even as he brandishes at hypodermic (staged as threateningly as possible). 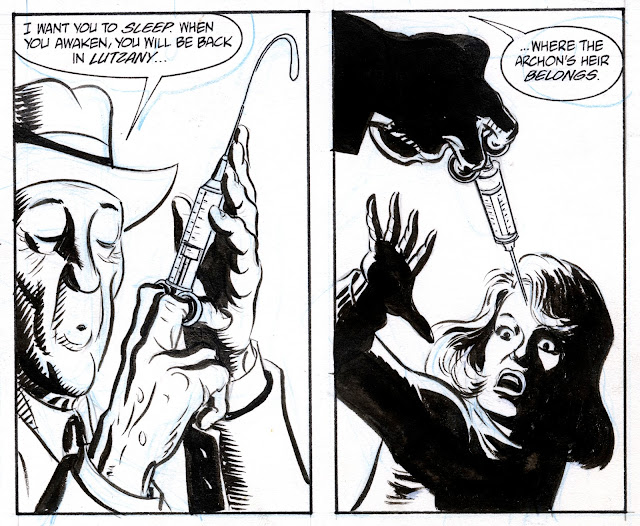 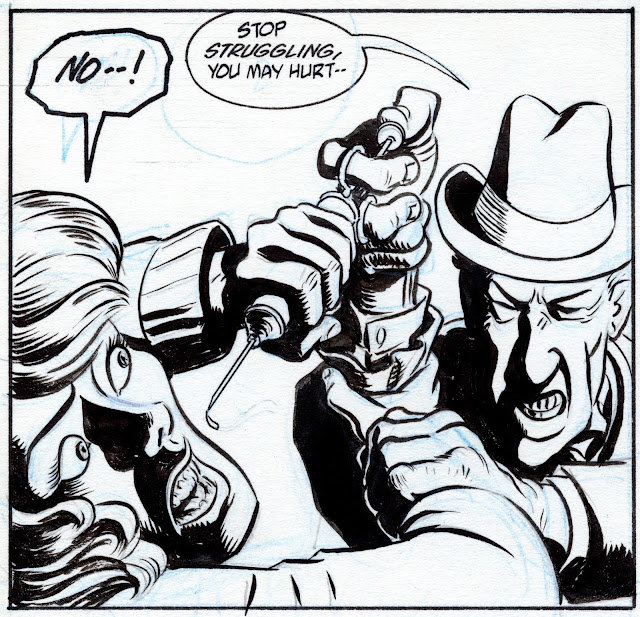 The pretense vanishes in page 19, panel 1. Again, the needle was staged for maximum threat. I really like both Helda’s and Dr. Steward’s faces in this panel. After almost 120 pages, I was finally getting the hang of making her appealing. 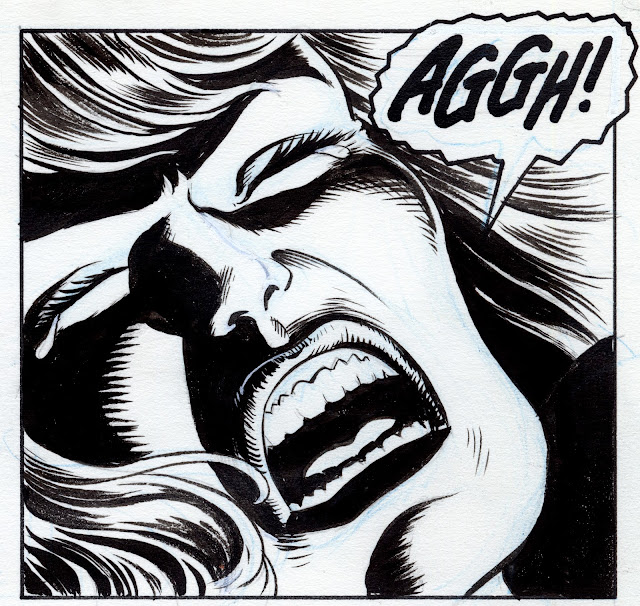 I’m not so successful in panel 2; I still hadn’t figured out how to ink a beautiful woman in close-up, especially when she was screaming in pain. I shouldn’t feel too bad; the only artist I’ve seen who could really pull that off was Atlas-era Russ Heath. 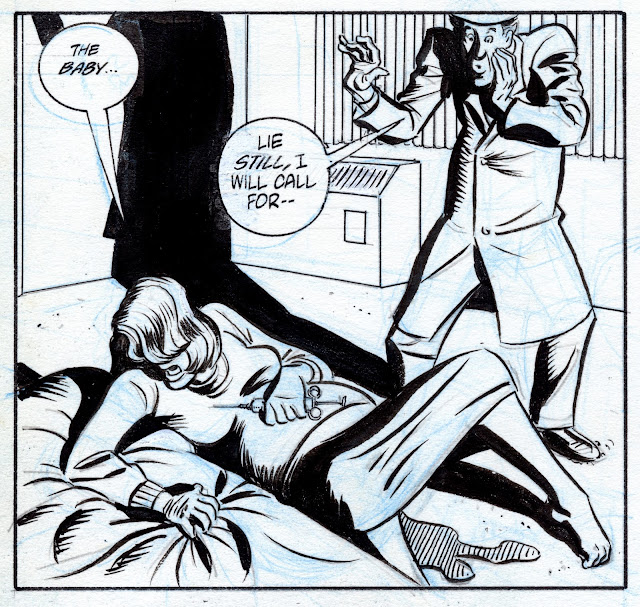 Panel 3 is cool for the lighting; I really like the way Steward’s shadow divides the panel almost in half along the diagonal. Again, the pre-set single light source lamp next to the bed (here off camera) was used for good effect. 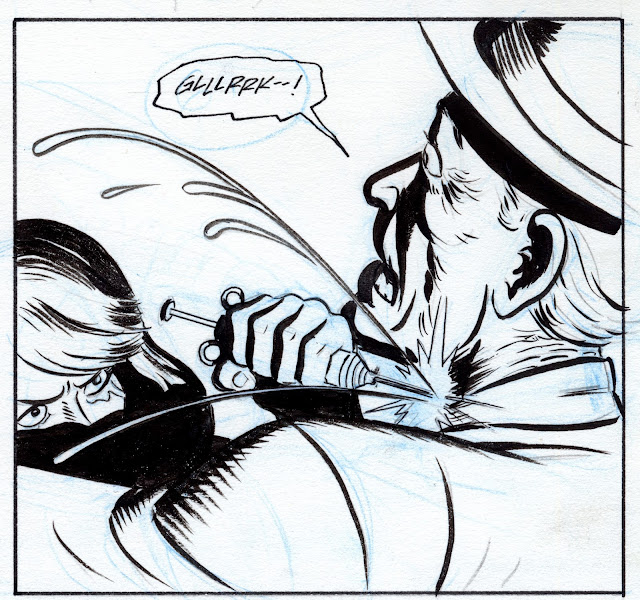 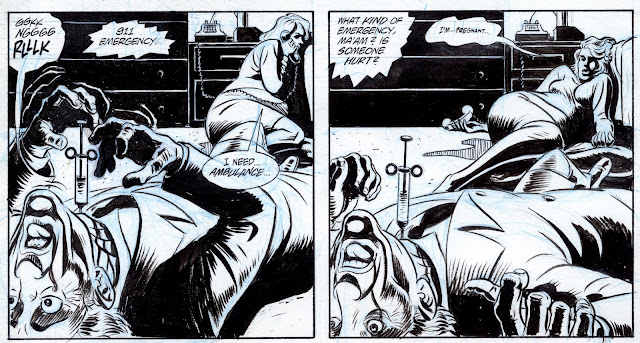 This made panels 4 and 5 a bit tricky though, getting both Steward’s death and Helda’s desperate phone call as her water breaks to play out in the same composition.