For issue #4, I’ll be posting my rough layouts along with each page. Since the writer, Mike Barr, and I were working “Marvel Style” (in that he gave me a fairly fleshed out plot outline as opposed to a finished script, writing the dialogue and captions to my penciled pages) I suggested possible dialogue to go along with my staging, anticipating that Mike, or the editor, Bob Schreck, would ask for changes in my layouts before I went into the tight pencils. This was how we worked in the animation biz; I had been trained to accept that as a normal part of the collaborative process. 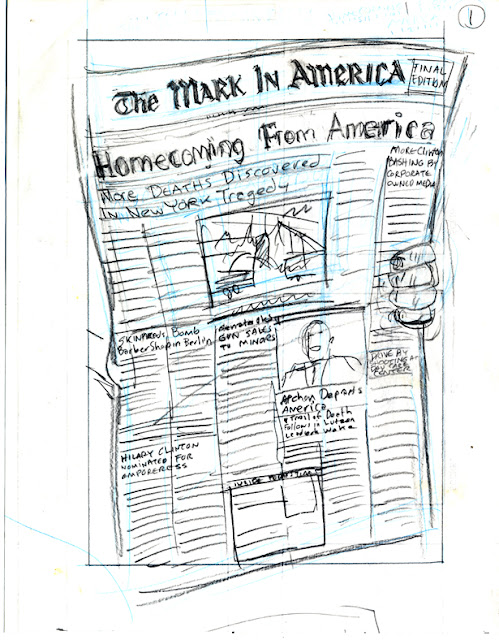 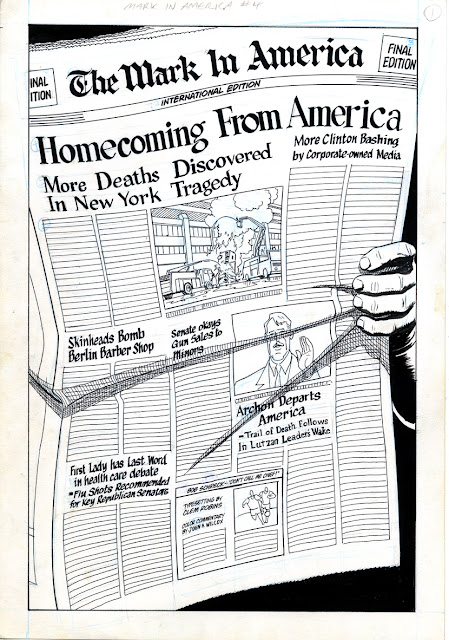 I was trying to be Eisner-esque in my splash pages, and this one was more explicit than many of them. It works better as an idea than in actuality. There are two problems: the lettering on the headlines and the lack thereof on the body type (i.e., the horizontal lines suggesting type so as not have to draw type for the entire front page). I lay the first problems squarely on the letterer doing his usual hack job; the blame for the second rests on me, both conceptually (the paper was too close to “the camera” to allow this type of suggestive drawing passable, and there was no way I or the writer, Mike Barr, was going to actually write a full front page full of lead articles and THEN letter them by hand.  And if the computer graphics technology was advanced enough in 1993 to allow writing the copy, typesetting and then warping it over the surface of a slightly folded newspaper, I didn’t have access to it) and in execution (the lines used in cross hatching the folds of the newspaper contradicts the parallel horizontal lines used to suggested the body type). Not one of my more successful moments.


This is page 1 for "The Mark" issue 4, volume 2, otherwise known as "The Mark In America", published by Dark Horse Comics in March 1994. Written by Mike Barr, Drawn by Brad Rader
Posted by Brad Rader at 8:30 AM