These are pages 11, 13, 30 and 31 from a story board for a proposed series called “Roxie’s Raiders”, done by Jack Kirby for the Ruby-Spears animation studio, some time in the early ‘80’s. (My set of copies has many gaps; I invited anyone who is able to fill those gaps. I’m missing pages 4,6,12, 14 through 29, and 36 through 46.)
For more on the project, follow this link. http://comicsalliance.com/10-amazing-jack-kirby-designs-that-need-to-happen/ 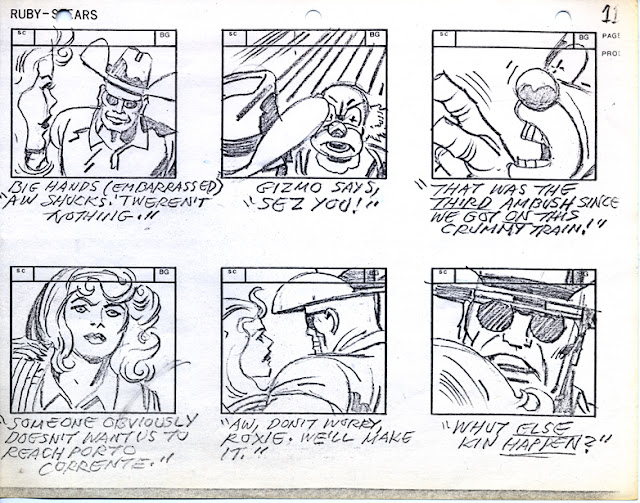 In my career as a storyboard artist and director of animation, I have often been assigned the task of supervising or correcting other artist’s storyboards, “making them work” as it were. If I were give THIS storyboard to “fix” (sacrilegious as that thought is), the first task would be to re-size every single panel so that it fit within the aspect ratio of the panel, or, which would be easier, simply erase or white out the art spilling upward into the SC and BG number lines, followed by an admonish to the artist to stay within the panel boarders. Then I’d tell the artist to add backgrounds; even if the backgrounds are out of focus, one needs to be out of focus on SOMETHING. One can call out color card backgrounds, but that sort of thing should be used sparingly, like when the camera is pointing up at the sky. 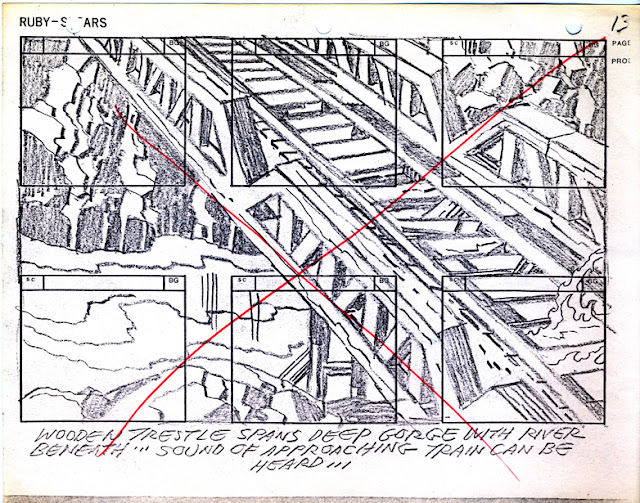 PAGE 13: This page is obviously meant to be a single panel, so all that really needs doing is to make sure the overall aspect ratio is correct. The red Sharpie “x” across the page would seem to indicate that the whole thing was cut, but from what? There was never a pilot made from this storyboard, as far as I know. I would specify in the staging directions that the water and flames need to be animating, maybe draw out a 3 pose cycle for those two elements. 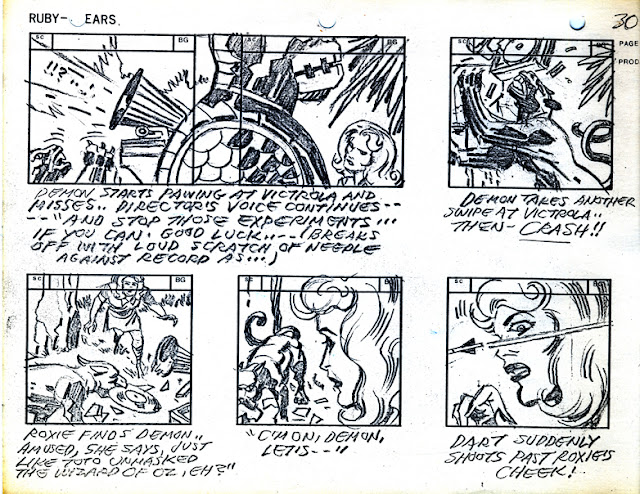 PAGE 30: Again with the artwork bleeding out of the image area into the book-keeping area. Knock it off, Jack! Also, is panel one and two a pan? If so, which direction are we panning? If it’s not a pan, then Xerox it down and redraw it to fit in one panel. Give me at least two acting poses on Demon in both panels one and three. Panels three and four won’t work if the bookkeeping part of the image is erased, so they need to be expanded out to either side. Screen direction on Demon flops for no reason between panels one and three, please fix. 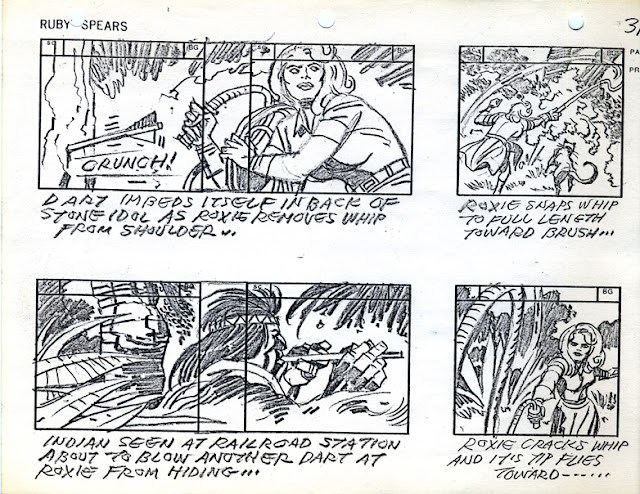 PAGE 31: God, this is too painful. It reminds me of what Bruce Timm said about not wanting to hire his heroes (as in Jack Kirby and Alex Toth): he didn’t want to be in the position of humiliating them by forcing endless changes upon them. I can only imagine that John Dorman was looking for excuses to give Kirby work and accepting the results as inspiration, not something useable in and of itself. Basically, what we have here is a comicbook pretending to be a storyboard. To work as the latter it would have to be adapted by another artist, who would end up having to put more man-hours into it than Kirby did in the first place. It would be a fun job, though.
Posted by Brad Rader at 9:06 PM