THE MARK IN AMERICA, PAGE 12

When I drew this page (late winter/early spring of 1993) I had just come off almost 2 years as a staff storyboard artist on the Batman Animated TV series for Warner Animation.  I was hired to draw this series (the Mark) partly because the editor, Bob Schreck, wanted something akin to that style. There’s only one remnant of the show’s style I can see on this page: in panel 1, both of The Mark’s hands have a single line across where the knuckles should be. This is a stylistic innovation of Bruce Timm, the main character designer on the Batman TV series.

A clearer influence on this page (and my work on the series as a whole) is Will Elder, though I didn’t realize it until I was inking issue 3. At that point, I pulled my Elder reference off the shelf and started doing consciously what I had done unconsciously until then. I’m not saying I aced it, but the sight gags and such in this panel remind me of Elder’s intentions though his execution is quite superior to mine. In my opinion he is one of the all-time great comic book ink technicians, fully the equal of Wally Wood, Alex Raymond, Joe Sinnott, etc etc. Most of the gags in panel #1 were scripted by Mike Barr, but I was totally into it (them).

This is page #12 from "The Mark" issue 1, volume 2, otherwise known as "The Mark In America", published by Dark Horse Comics in December 1993. Written by Mike Barr, Drawn by Brad Rader 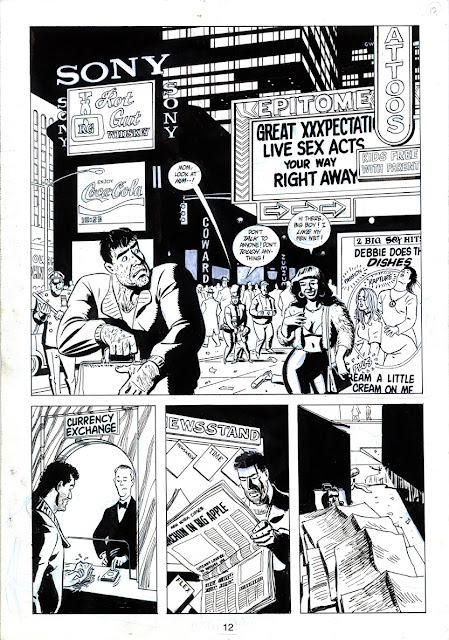 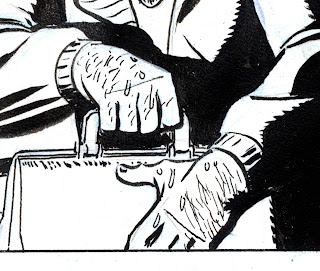 This is the surviving "Timm-ism" on page 12 of THE MARK IN AMERICA, ISSUE 1 that I referred to earlier today. Note the single lines going across where the knuckle on the hands should be.
Posted by Brad Rader at 7:17 AM