During the (early 90’s) when I was working on “The Mark”, I made 2 key artistic discoveries that have influenced my ever since. Or perhaps they didn’t so much influence me as validate and encourage me.

The first discovery was Val Lewton, producer of low budget films for RKO in the 1940’s. He specialized in what I call “The Mind-fuck Horror Movie”, as in, “is this really happening or are these people crazy”? All of Lewton’s horror movies for RKO (Cat People, Curse of the Cat People, Bedlam, The Body Snatcher, I Walked With A Zombie, The Seventh Victim, The Ghost Ship, The Leopard Man) are in this genre, probing the fuzzy line between sanity and madness, refusing to pass cinematic judgment. This last sentence key; it’s his refusal to pass judgment on the sanity or morality of his characters, and his rather mournful compassion toward all of them that make his movies of a piece and somewhat unique unto themselves. His “unknown other” characters (one can’t really call them villains or monsters) NEVER did evil leers or were singled out for cinematic emphasis in terms of lighting or camera angle. For instance, in “The Body Snatcher”, when Fettes (the medical student who is the audience identification character in the movie) is convinced by his mentor, surgeon Robert Knox, to cover up the murder of a young flower girl and use her corpse for dissection, the story doesn’t suddenly go “film noir” with horror lighting and dramatic camera angles. The drama continues to be presented in a bland, matter of fact manner, leaving the audience to come to their own emotional conclusions about the escalating horror of the events. (To Be Continued)

This is page #18 from "The Mark" issue 1, volume 2, otherwise known as "The Mark In America", published by Dark Horse Comics in December 1993. Written by Mike Barr, Drawn by Brad Rader 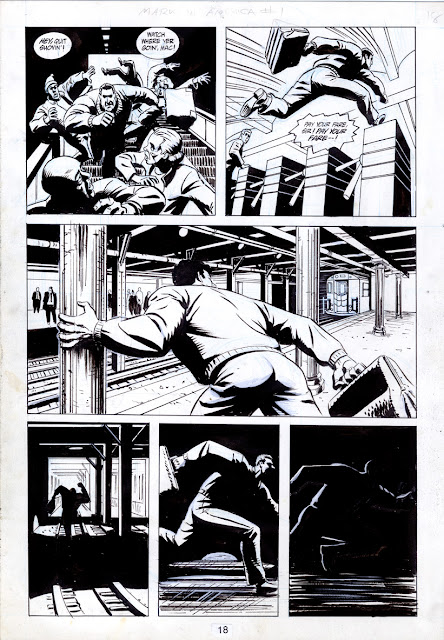 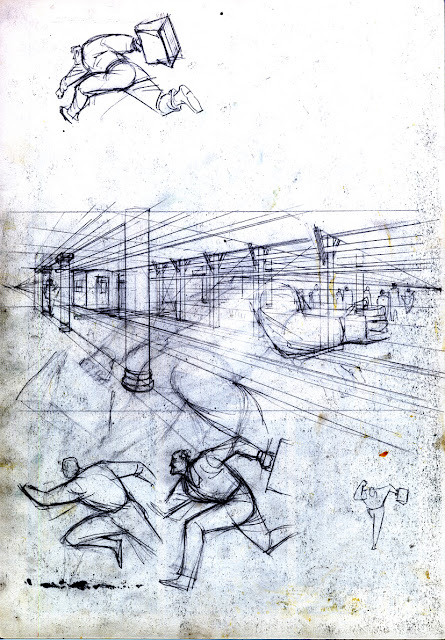