Yesterday I said I recognized my stylist debt to Will Elder while inking issue #3; I have to correct that mis-statement. It had to have been here. The inking on the figures practically screams Elder, not just in the quality of the brushwork, but in the cartoonish attitudes of the characters. One of the critiques of “Fogtown” (the graphic novel I illustrated for Vertigo Noir, published in 2010) was that my acting and expressions were “stilted” and “contrived”. I see their point. I always aim for the perfect pose, seen from the most advantageous angle, often communicating several quanta of information simultaneously. Some may see this as artificial or “stilted”. One can make the same charge against Alfred Hitchcock, a primary influence of mine.

This page and the next are the reasons I felt I had to go off-script and expand this part (while condensing the previous “Mark on the Road” sequence). The script, as written, didn’t adequately introduce (or re-introduce) The Archon, Helda, and Special Agent Pierce, the character you’ll meet in tomorrow’s installment. I was influenced in this regard by Mark Evanier, who advised me early in my career to pay extra attention to how characters are introduced in a story (an example he pointed out was Indiana Jones in “Raiders of the Lost Ark”. Mark recommended I study the work of John Romita Sr., for his simplicity, clarity and dynamism. “The perfect superhero page should have a close-up, a panel with a good establishing shot, and a full figure pose that one could pull off and put on the cover next to the logo.”
(Mark said this to me in 1983, so my memory is probably inexact.) I file this advice alongside Wally Wood’s “Panels That Always Work” sheet.

This is page #13 from "The Mark" issue 1, volume 2, otherwise known as "The Mark In America", published by Dark Horse Comics in December 1993. Written by Mike Barr, Drawn by Brad Rader 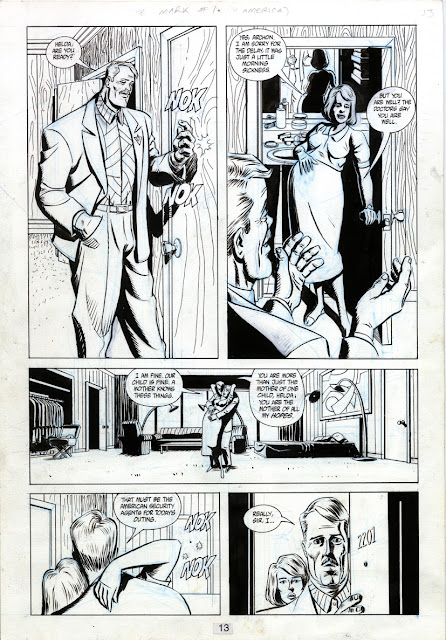