I penciled the sfx “bang bang” in panel 1 myself. The way the production process worked on this project was, I would rough out the pages on 8.5” x 11” paper, Fed Ex copies to my Editor, Bob Schreck (I don’t recall sending copies to the writer, Mike Barr), get approval on my roughs (Bob was a very “hands off” editor so I never got any comments, to the point where I asked him if he actually looked at them. He assured me that he did, and that “I love looking at roughs”). I would pencil a batch of 12 or so pages, send them in to be lettered and ink the lettered pages. I realized early on that the letterer was fine on the body copy, but I found his titles and sfx lettering uninspired so I started penciling those myself, starting with this page. I am hugely influenced by Will Eisner, Alex Toth and Walt Simonson in their use of lettering and usually pencil the titles and sfx myself if I’m allowed. I place the word balloons in the roughs for the letterer to use as a guide. On my first comic book job, penciling “The Batman Adventures” issues 4 through 6, I would actually write out all the words to make sure I was sizing the balloons correctly.

This is page #6 from Dark Horse Comics #15, “The Mark: What Goes Around”, written by Mike Barr, drawn by Brad Rader, published in December, 1993. 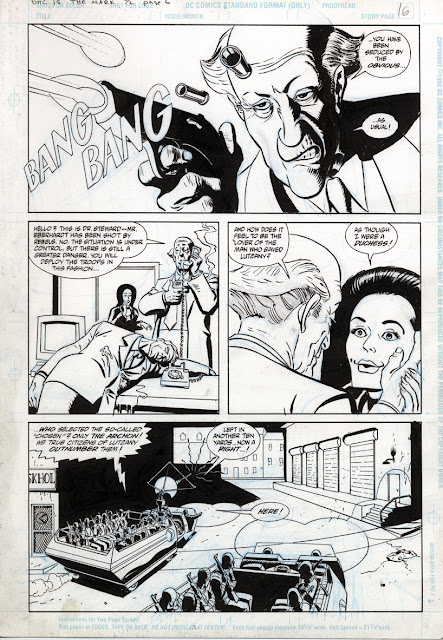