To recap, I gave myself Carpal Tunnel Syndrome in early 1987, while storyboarding on the Spiral Zone animated TV series. We were given 2-week rotations on our assignments, with deadlines on Monday afternoon. I would work round the clock, starting early Sunday morning to meet that deadline.
Usually, my right hand would start to hurt around Noon on Monday, but I’d keep working until, by the time I made deadline, I would be in a certain amount of pain. I’d rest and recover for a couple days and be good to go on the next assignment.

On the storyboard where I finally injured myself, my hand pain started early, around 7:00 AM. I kept working anyway; when I finally handed in around 5:00 PM I could barely hold a pencil. And I didn’t recover as expected. In fact, I didn’t recover at all, and had to go on Disability. Oddly, it was only then that I heard about my malady. There was a sudden flurry of reporting in the media about this mysterious condition. It had never occurred to me that such a thing was possible; my workaholic cartooning heroes never even hinted at it in interviews. My animation-artist peers never mentioned it. WTF?!?

This is page #2 from Dark Horse Comics #15, “The Mark: What Goes Around”, written by Mike Barr, drawn by Brad Rader, published in December, 1993. 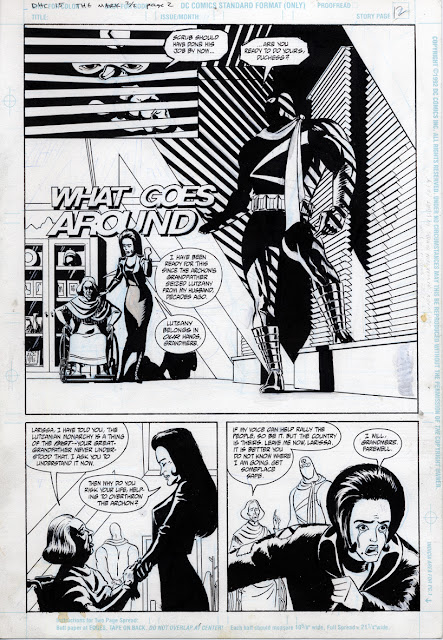