The Mark, "Taking Back The Streets", page 4

Bob Schreck, the editor on Dark Horse’s re-launch of “The Mark”, made me test for the assignment by drawing the first 3 pages of Mike Barr’s script. Today’s post is the first page I did knowing I had the gig. It was problematic when it came to inking as I had never inked professionally before. I especially had trouble with the looming close-up in panel #1; I thought it looked like bad early Mike Zeck: too detailed, too tight, not at all the bravura simplicity of my heroes, Alex Toth, Milt Caniff, Frank Robins, Jordi Bernet, etc. 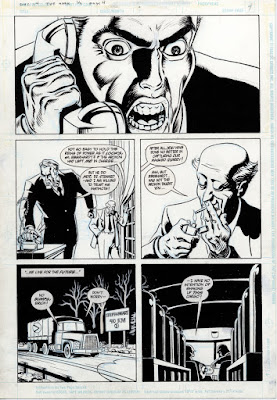 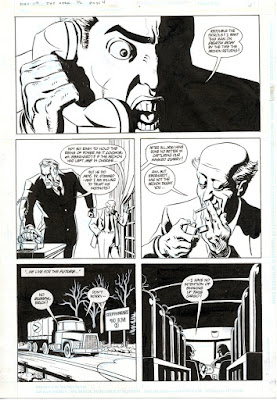 These are two versions of page #4 from Dark Horse Comics #14, “The Mark: Taking Back the Streets”, written by Mike Barr, drawn by Brad Rader, published in November, 1993.
The one on the left is my first version; the one on the right is my re-do, after having received critique from Steve Mitchell and Mike Vosburg.
Posted by Brad Rader at 3:00 PM