The Mark, "Taking Back the Streets", page #7

I cast “the Duchess” on this page as Aunt May from the Spiderman series. “Larissa” is my attempt at Anouk Aimée. “Eberhardt” (from page #4) was supposed to be Montgomery Clift. “Dr. Steward” was based off John Huston. I liked what I did with the 2 elderly characters; I was frustrated in trying to achieve specific likenesses on the beautiful younger characters. In the case of Larissa, my main reference for Ms. Aimée was a laser disc of “8 1/2” where she was wearing sunglasses to hide a shiner. In the case of Mr. Cliff, it was only years later I realized my mistake: I drew the character’s head too small, making him look stereotypically heroic.


This is page #7 from Dark Horse Comics #14, “The Mark: Taking Back the Streets”, written by Mike Barr, drawn by Brad Rader, published in November, 1993. 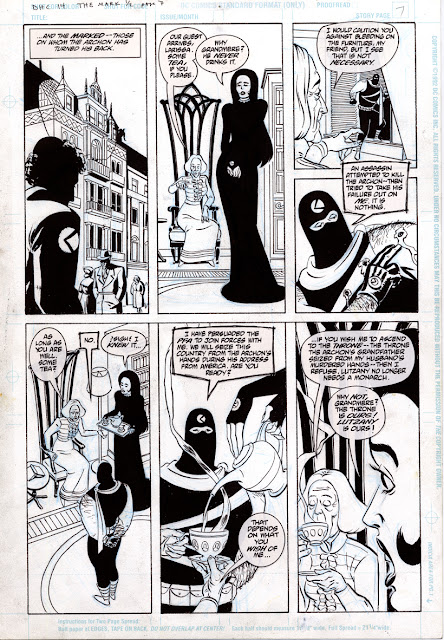