January 29, 2016
(This is part 5 of the saga of my brief relationship with Alex Toth, starting with me cold calling him in September 1992.
The page shown here was originally intended to appear as an episode of the “Challengers of the Unknown” ongoing series in Adventure Comics in issue #498, April 1983. Eventually they saw print in DC Comics Presents #84, in August 1985, somewhat reworked as a team-up between the Challengers and Superman. The post-card is reproduced by gracious permission of Dan Riba).

I called Bruce Timm(producer of the Batman Animated TV series for Warner Brothers) and Dan Riba (director on the same) about Alex Toth’s offer to meet us for lunch at one of his favorite restaurant’s, El Chiquito, across the street from the WB main lot.  The day and time was agreed upon. Unfortunately, I’m writing from memory, 24 years later, so I’m unclear on many of the detail (the previous 4 entries of this ongoing blog were transcribed from my daily journal of the period; I’m shocked and mystified to find no record of this event).
And he stood us up. We waited around for a half hour or so, eventually ordering lunch and shooting the shit for an hour or so in case Mr. Toth showed up late, but no such luck. All I remember is that I bought along photocopies of my pencils to the first half of Batman Adventures, #6, so the date was a couple months after 1992’s San Diego Comicbook Convention (I don’t think it had become Comic-Con International yet) with intention of showing them to Mr. T.  I showed them to Bruce and Dan while we waited. I vaguely recall that someone had brought along photocopies of John Romita Jr.s’ pencils to Star Brand. I opined that it was okay, but that I liked what I was doing better. JR JR had no squash and stretch, his posing lacked nuance and drama, etc.

Eventually I called Mr. Toth to follow up; he was suitable apologetic. But I learned my lesson about trying to schedule things with him. 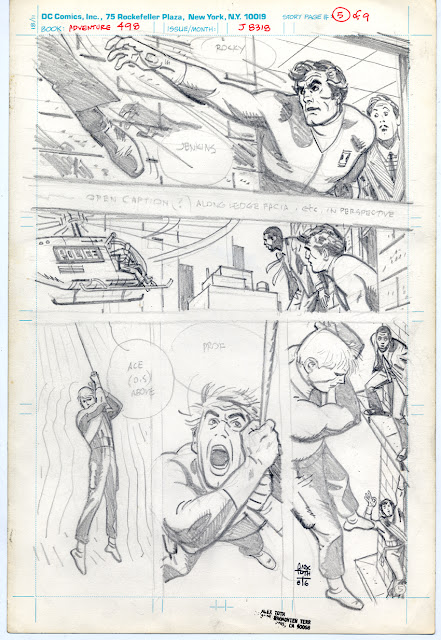 I’m transcribing Alex’s postcard to Dan Riba because it may be hard to read as a jpeg.

“Dear Dan,
Many thanks for surprise gift tape of “Cagliostro” none of which was I able to follow continuity of at all, of course, but did admire all the complex graphics, tricks, fx, color, design of very much- too fast action therein, as in most tv/theatrical feature work, with the too fast jump cuts, is nerve wrackingly high-paced, start to finish, unrelenting- which is the stuff of Japanese animation since the ’60-Bots’ or ‘Orbots’ or whatever of a decade ago. Its skip-framing look in its staccato action bothers me, denying eyes to focus on anything with jump cuts amplifying speed, but Japanese exaggerate as standard practice! I noted a few rotoscoped bits, stylized, and I enjoyed all too-few quiet, subtle, pauses great dramatic erect. Its overall tongue-in-cheek humor works to put over its’ outrageous action/feats.
Brad said your ‘Batman’ team studied the above and other such features as inspiration for your own work- I see a similarity- but also your own ‘look’ prevails, with is fine, and much preferred, by this daily viewer-
Good mysterioso touches and often lowkey live action-like voice acting and the subtleties of small but telling gestures, which I applaud- day to day. The show’s uneven, which is the norm in TV prod-n, but, mostly your output is commendable- except for walks/runs by characters other than ol’ Batman himself- who seems to be give special care (as well he should) and Brad cited a direct market video feature upcoming of ‘Batman’ and a spinoff ‘Catwoman’ series-Good news for all of you doodlers! Do your best! It’ll show! It has, so far! Looks like a lot of fun, too! They usually come back late in the run or at the end, as per-prior policies-
Anyhoo-Thanks Again, Dan- 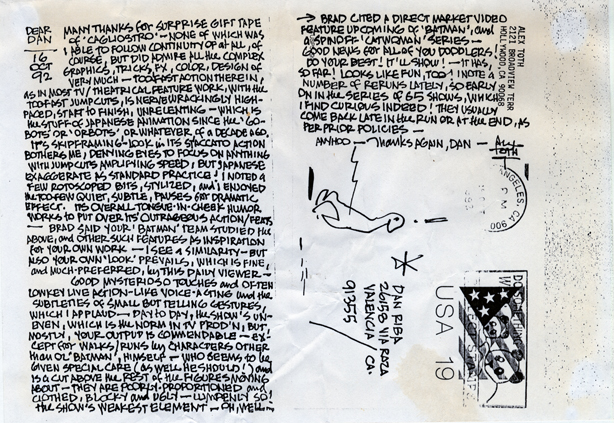