January 31, 2016
(This is part 7, the final installment of the saga of my brief relationship with Alex Toth, starting with me cold calling him in September 1992.
The page shown here was originally intended to appear as an episode of the “Challengers of the Unknown” ongoing series in Adventure Comics in issue #498, April 1983. Eventually they saw print in DC Comics Presents #84, in August 1985, somewhat reworked as a team-up between the Challengers and Superman.)

“DB: Your style is so graphic and so graphic and so bold and like you said, it’s simple but everything is there. The essence is there. And today you just don’t see that very often in comics.”
“AT: Well, you’ve got Mazzuchelli, you’ve got Mignola, you’ve got uh…”
“DB: Allred.”
“AT: Allred, who is very bright. This Brad Rader is quite good too. He sent me his book, “The Mark”, for a Dark Horse series …and I was very impressed. He had sent me one or two of those early “Batman” TV cartoon books that he did for DC Comics. I found it interesting, but I think somebody else was inking him on those books. It was very close to the cartoon style used on the series, which it was meant to be- but he had some nice touches in there. He’s really good on this Mark series and I just wrote him a postcard saying so. He’s one to watch.”
Interview with Alex Toth, conducted by Darrel Bowen,
“Anvil Anthology, #1, Vol. #1, 1995

Anvil Anthology #1 was published or co-published by Patrick Archibald, one of my fellow storyboard artists at Disney Television while I was staff storyboard artist on the  “Gargoyles” TV series in ‘94/ ‘ 95. Patrick called us into his office first thing in the morning to show off his box of Anvil Anthology, a slick paper high-quality magazine show casing the work of various animation artists doing comics. Pat had a story in the issue. It was pricey at $5.00, and I sort of resented his expectation that we all should buy a copy. I put him off, telling I’d come back after lunch and get my copy. I noticed the interview with Alex Toth in the middle of the magazine, but didn’t stop to read it. I was tired of Alex by this time and didn’t feel the need to read his ramblings.

So, an hour later, I was walking down the hall of the Television Academy Building in North Hollywood, California, that Disney Television occupied the 10th floor of. I turned a corner and saw one of my fellow storyboard artists, Butch Lukic, approaching. He stopped dead in his track, pointed at me, and calling out, “You! He talks about YOU!” Butch practically grabbed me by the arm and dragged me into Pat’s office, pulled out a copy of Anvil and opened it to the Toth interview, pointing out the paragraph quoted at the top of today’s blog.

Oh my God. Talk about the best possible compliment one could get. I was floating on a cloud. For days after, when people passed me in the halls of DTV they would bow and say solemnly, “Blessed By Toth”. (Well, it happened at least once, anyway).

So I bought a copy. And called Alex to thank him. I hadn’t spoken with him in a while. He answered with a harsh, growling, “Yeah?”
“Uh,” I stammered hesitantly, “I read your interview in the first issue of “Anvil” and wanted to thank you…”
“Goddam it, they were supposed to send me a copy to proof read and they didn’t! Send me a copy”
I don’t remember if he gave me a chance to reply before he slammed the phone down, hanging up on me.
I returned to Patrick’s office, brought at least one more copy, sent it to Alex with a sincere thank you letter, and didn’t talk to him for a year or so, when I called to give him the news of my first directing gig, on “Captain Simian and the Space Monkeys”. When I gave him the elevator pitch about the series he dismissively replied, “Why can’t you people come up with something original; why does it always have to be like something else?” Thoroughly annoyed, I stopped calling him for good, one temptation at a time.
In summation, I can only say that my feelings Alex Toth are ambivalent. He’s one of my all-time favorite artist, and a roll model in both a positive and negative sense: On one hand, he was a perfectionist, always growing, changing, exploring new possibilities, increasing the graphic vocabulary of comics as few other artists have. On the other hand, he’s an object lesson being artistically crippled by perfectionism. Similarly, on one hand, he was a proud man, not suffering fools lightly. On the other, he was quick, too quick to take offense and too inclined to take slights personally.
During the period in the early 90’s when I was interacting with Toth, I watched “The Fountainhead”, the movie version of Ayn Rand’s novel. In the scene where Howard Roark (played by Gary Cooper) visits his mentor’s death-bed, I was struck by the parallels with Alex Toth and my quasi-relationship to him. The mentor, a brilliant but ignored architect, gestured to the studio full of dust covered diagrams and scale models of unrealized projects and croaked, “Burn them! The world isn’t good enough for them!” The movie cuts to a scene of Gary Cooper dutifully burning the mentor’s life work.


In a subsequent exchange Alex revealed that he was an admirer of Ayn Rand, and that “”ATLAS SHRUGGED” READS LIKE ITS THIS DECADE’S NEWS! WE’RE LIVING IT! DAMN IT!” (The caps are his). All I can say is I’m glad Alex’s caretakers didn’t burn Alex’s archive. 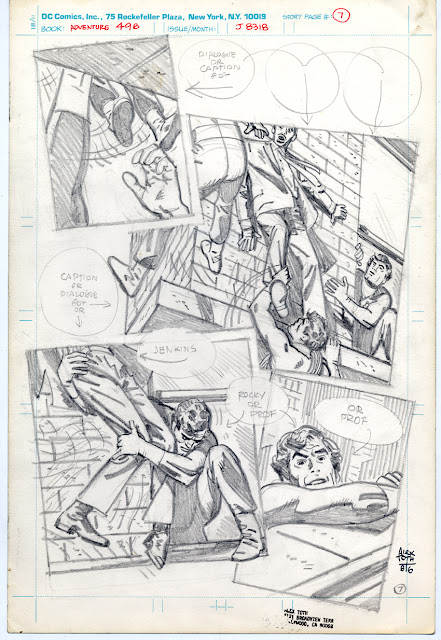