January 30, 2016
(This is part 6 of the saga of my brief relationship with Alex Toth, starting with me cold calling him in September 1992.
The page shown here was originally intended to appear as an episode of the “Challengers of the Unknown” ongoing series in Adventure Comics in issue #498, April 1983. Eventually they saw print in DC Comics Presents #84, in August 1985, somewhat reworked as a team-up between the Challengers and Superman.)

Things are somewhat anti-climactic from here. I would call Alex every couple of weeks. Sometimes it was like we were old best friends; other times it was “who the Hell are YOU.” Eventually I said something that alienated him (I think it was sticking up for Frank Miller and Bruce Timm), from that point on I was banished. I think I waited a couple years, tried again and we were friendly for a while until I, once again, transgressed.

I have decided to throw brevity to the wind and transcribe one of our exchanges.

From Alex Toth, dated 12-15-92. He is responding to my sending him a copy of my first published work, penciling ‘Batman Adventures’ #4
“DEAR YOU
“RCVD YR ‘BATMAN’-Thanks- and LIKED IT OVERALL-THO’ the COLORIST DID YOU NO FAVORS- WORST CHOICE POSSIBLE- for DULL, MUDDY COLORS, and HE HAS NO IDEA at ALL HOW TO DO EXPLOSION at ALL, USE IT to LIGHT the SURROUND, etc, WHERE the WHITES and BRIGHTS SHOULD be- NO THINKING in EVIDENCE- WHAT QUALIFIES HIM TO HIS TITLE, I wonder? The COVER LOGO’S NOT QUITE ‘ON’! WISH YOUR COVER’D ECHOED MORE of the TV SHOW’S DARK MYSERIOSO LOOK/FEEL! ‘BATMAN’S a MINOR PLAYER THERE- HE’S MUCH MORE DYNAMIC a FIGURE than ROBIN + THUGS UP FRONT! COULD’VE USED A LOT MORE BLACKS ON the FIGURES. AS PER the FIRE-LIT NIGHTSCENE’S PRIMARY DRAMATIC HIGH CONTRAST VALUES! DIG? BY ALL MEANS, SEND FUTURE COPIES! GRAZI!
BY ALL MEANS, SEND FUTURE COPIEW! GRAZI! I’LL ENJOY YOUR PROGRESS, I’M SURE! PS- DO I SEE MY ‘BATMAN’ POSES IN SOME PANELS of HIM AT the CONTROLS? ECHOES REVERB’ HERE-
WELL- OKAY- WHATEVER1
HOPE YOU INK YOUR OWN PENCILS/and COLOR!
I’M SURE YOU’LL DO IT BEST-
YOUR WORK HAS SOME JACK COLE IN IT, THAT’S GOOD! NICE BLENDING-IN OF SAME! The CONTE CRAYON/DRYBRUSHED EDGES OF BLACKS TO GRAYS WORKS FINE ON FIGURES/etc- DO MORE- AND DON’T LET DC ‘SCREEN’ THEM WHICH THEY’D DONE IN the PAST- DUMB!
Thanks for INVITE TO YULETIDE FEST, BUT I’M PLAYING HUMBUG for WHICHEVER of MY 4 KIDS DEIGNS TO VISTI MY DUSTY MUSTY DIGS- IT’S NOT MY BEST TIME OF the YEAR, MOST TIMES AREN’T REALLY- NO SURPRISE, RIGHT? I’M JUST WORN-OUT KIDDO, to the BONE- Alex T”

My reply, dated December 21, 1992:
“Dear Mr. Toth,
“Thank you for the postcard (sorry that this letter is coming to you as a Xerox, but I’m writing it in my journal and I want to keep it). I wanted to respond to some of your comments there in.
1)   I didn’t do the cover. If you look carefully along the left hand spine you’ll see the signature of Ty Templeton, who drew issues #1- #3.
2)   I agree that the colorist didn’t do me any favors. However, I don’t think the inker or letterer did me any favors either.  The letterer especially pisses me off. I lettered all the title lettering for the chapter headings and a lot of the SFX lettering when I did the pencils The letterer, when he inked my pencils of the typography, did a really hack job, putting less work and thought into it by far than I did. I find page 9, panel 2 especially infuriating. Having the SFX lettering run over Hill’s face was my idea, and he (the letterer) sort of followed my pencils, but he has the damn letter forms going over Hill’s eyes, so you can’t tell which direction he’s looking, which fucks with comprehension of the entire page. (By the way, I’m curious- does the workman on this page read as Mario to you?) Also, on page 10, panel 3, he flops Batman and Alfred’s word balloons so that Batman’s reaction dialogue comes before Alfred’s cueing dialogue. To me, this is brainless, stupid shit.
3)   I don’t care much for the inks either. I know, I could have done much worse- at least he wasn’t hacking- he was trying to plus my pencils. But a lot of his “plussing” I could do without. For instance, page 7, panel e’s shadow of “Diner” on the wall behind the TV was all his idea. The bat shadow in the bg of page 20, panel 4 was his add. In issue 5 he sticks in bat shadows every chance he gets. I fucking HATE bat shadows. I think they’re trite, which is why I didn’t put them in my pencils even when the scripts called for them. Basically the inker added detail in many places, which made busier an artjob that was too busy already. Sigh… Basically, what this does is harden my resolve to ink, letter and color my own stuff (write, too).
4)   I wasn’t consciously copying any of your posing, though I’ve spent so much time studying your work that it’s inevitable you’d show up somewhere.
5)   Thanks for comparing me to Jack Cole. He’s not an influence particularly, but I like his stuff. I’ve been compared to Joe Staton, too. Staton however, I don’t even like.
6)   I don’t like the conte shading on the figures. I think it adds to the over-all overworked, over busy feeling. Also, it doesn’t go with the style of the show. In the show, the pebbled shading effect is used on the backgrounds; the figures are clean lined. The inker of the comic does the reverse.
7)   Too bad you can’t make our Xmas eve party. I didn’t think you would. But as I always say, “If you don’t put your hook in the water, you’ll never catch fish.” (I thought that one up myself.)

Basically, my criticism of my own work in my first published comic is: it feels over worked and over busy. I was working too hard and not getting enough back. It has an uptight, anal-retentive feel to it that is made worse by the inker’s timid, prissy stylings. However, a lot of the can be chalked up to first-issue-it is. I was pretty much over it by my third issue.
I’m really excited by my own work. I feel like I have it within me to play in the fields of the lord, so to speak—to do work on par with the greats – Caniff, Miyazaki, Raymond, Eisner, Kurtzman, You, Herge´, Adams, Heath, Giraud. I see the seeds of greatness within myself and intend to nurture them. If I didn’t feel that way, I wouldn’t be wasting my time, working for a fraction of what I could be making in the animation biz.
I know it’s unseemly to toot my own horn this way. One of these day’s it’ll come back to haunt me, I’m sure. Oh well. I’ve always had to learn things the hard way.” 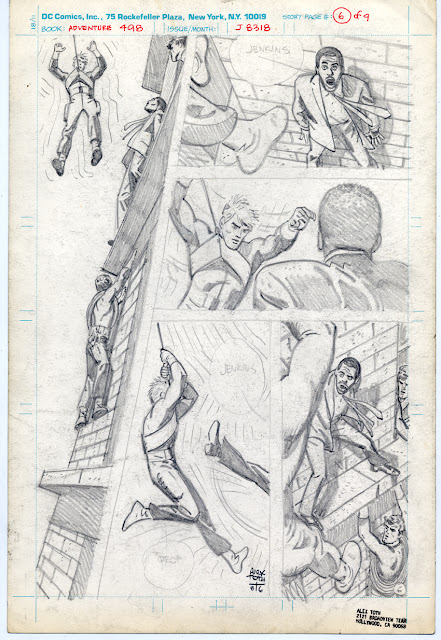 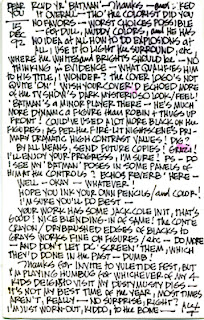 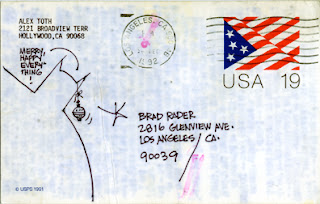