January 27, 2016
(This is a continuation of the story of my first telephone conversation with Alex Toth, in late September, 1992.)
We started talking about Japanese animation, which he hated. I disagreed vehemently and asked if he’d seen the work of Hayao Miyazaki. He admitted he had not, so I silently resolved to get him a copy of Miyazaki’s first movie, “Castle Cagliostro”.

I asked him why he didn’t work for us on the Batman Animated series. He said that nobody had asked him.  I replied I knew for a fact that the producer, Bruce Timm, had tried calling Toth three days in a row, early in the production. (Bruce was as big a Toth fan as I was). Unfortunately (or, perhaps, fortunately) Toth didn’t have an answering machine and wasn’t picking up. Alex was unapologetic, retorted, “Well, he could’ve contacted me by mail”. (Yeah, right. He knew as well as anyone that this was not how things were done in the TV biz.) So I asked him point blank, if he got a letter from Bruce, would he work for us? He said he didn’t like to work on series that were already set in stone; he liked to get in at the beginning. I said we were gearing up for a Catwoman series that would be 13 prime time half hours on Fox, that it wasn’t set in stone, that Bruce Timm and Eric Radomski would be presenting preliminary drawings in a couple of weeks. Alex seemed tentatively interested; at least he didn’t say he wasn’t.

Eventually, around 9:00 PM, I told Mr. Toth that I really enjoyed the conversation but that I had to let him go. He apologized for not being able to meet me in person and said, maybe, at a later date things might change. He invited me to call him again sometime; he seemed almost choked up about our conversation.

I was pretty emotional myself; this conversation with Alex Toth, one of my heroes, was like a dream come true. I could hardly sleep that night. The next day, I rang Bruce Timm at Warner Animation (I was on hiatus from the TV series while I was drawing the spin-off comic book.) and gave him the run down of my conversation. Bruce went ape-shit. I told him to send Toth a letter ASAP. Bruce was hesitant. He was reluctant to try employing Toth for the same reason he didn’t want to hire Jack Kirby: he was afraid he’d have to fire them because they didn’t have “it” anymore. “Toth still has “it””, I asserted. “Remember that Zorro cover from last year?” 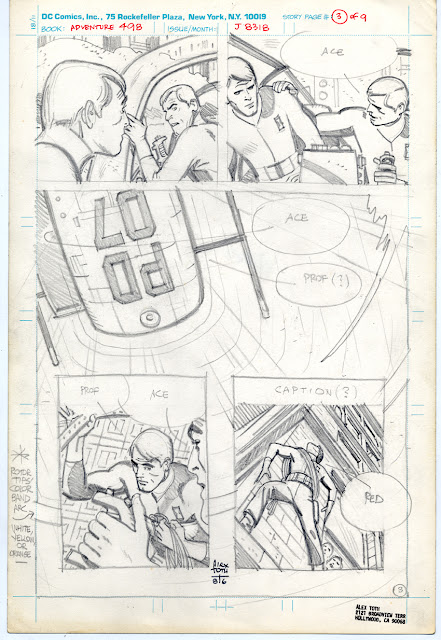 Next, I called Dan Riba, a long-time compatriot (we’d gotten our first jobs in the industry the same week, at Ruby-Spears, in 1983). Dan was now one of the 4 Batman unit directors, and a major Toth fan. I knew he had a laser disc copy of “Castle Cagliostro”, so I told him about my chat with Mr T. and suggested that Dan might consider sending Mr. Toth a dubbed VHS copy of the movie. Dan was enthused about the idea and promised to do so. (To be continued)
Posted by Brad Rader at 8:30 AM

I'm watching Porco Rosso right now, and that's how I got here. I'd have loved to been a fly on the wall for a conversation between Miyazaki and Toth.