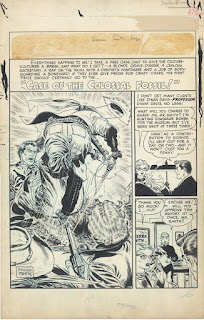 This page is a Sierra Smith splash, first appearing in DC Comics Dale Evans #6. It is penciled by Alex Toth, probably inked by Sy Barry, brother of Dan Barry, artist on Flash Gordon in the 50's and 60's among other things. Toth obviously, in this late 40's period, hadn't started honing in on the famed simplicity of his mature style. It's a cool page nonetheless. I am struck by the beautiful intricacy of the drapery folds and the detailing on the boots and spurs of the man being kicked in the stomach. Equally inspiring is the ammo belt, how as the bullet holder holes are drawn in perspective, some empty, some full, culminating in a side view upshot on the holster with the knotted string dangling therefrom. I also want to point out the beauty of the foreground rear close-up of the woman's coiffeure, contrasted with two much simpler views of the same hairdo seen from the front. 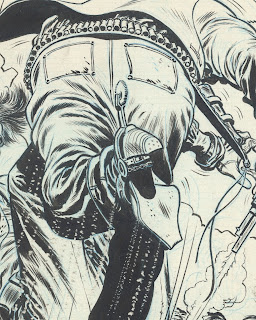 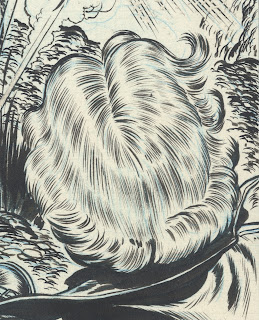 The teaching of most in the Southern Baptist denomination is that water baptism is not essential to salvation because it is a work and works cannot save. They quote Ephesians 2:8-9 as their proof-text.

Ephesians 2:8-9 For by grace you have been saved through faith, and that not of yourselves; it is a gift of God, 9 not of works, lest anyone should boast.(NKJV)

The question remains, is allowing someone to baptize you in water, a work, is it a good deed, is it a meritorious work? Of course not, it is simply obeying the command of Jesus to be baptized in order to be saved. (Mark 16:16...and is baptized shall be saved...NKJV)

If being baptized in water is a work, (the person being baptized does nothing but submit to baptism) then why is having faith not a work. Why is confessing Jesus as Lord and the Son of God not a work? Why is believing that God raised Jesus from the dead not a work.


What do you want to trust for your salvation, Southern Baptist doctrine or the Bible?