David Xavier Harrigan, aka Tomata du Plenty (stage name DePonty) (May 28, 1948 – August 21, 2000) was the singer of the late 1970s Los Angeles electropunk band The Screamers. painting. Tomata du Plenty was born as David Xavier Harrigan on May 28, 1948, in the state of New York, of Irish immigrant parents. His family moved to Montebello, California, when he was 9 years old, and Tomata ran away to Hollywood at the age of 15. In 1968 he hitchhiked to San Francisco, California, where he met members of the Cockettes.
From 1972–1974, Tomata joined friends Gorilla Rose and Fayette Hauser in New York City to bring guerrilla comedy to CBGB's and other East Village clubs, working with then-unknown bands like the Ramones and Blondie.
Returning to Seattle in 1975, Tomata formed a band called The Tupperwares with Melba Toast (later Tommy Gear). The band re-formed in Los Angeles in 1976, picking up drummer K. K. Barrett and keyboardist David Brown, and a new name, The Screamers. As much theater as rock band, The Screamers eschewed guitars and featured two keyboards, one drummer and assaultive lyrics mostly written and sung by Tomata.[
From 1977–81 The Screamers were L.A.'s leading punk band, and one of the city's leading club draws. They played consecutive sold-out performances at L.A.'s top music venues, including the Whisky a Go Go, the Starwood Club and the Roxy Theatre, but despite several offers never signed a record deal.[5]
Tomata began his art career in 1983 with a one-man exhibit of watercolor portraits at the Zero One Gallery in Hollywood.[8] Three years later, in 1986, his first paintings on canvas were exhibited at L.A.'s Cheap Racist Gallery at a show called Whores, Sluts and Tramps (at the opening party, guests appeared dressed as their favorite low-life heroes). In 1987, he won the L.A. Weekly's Best Set Design Award for his work on John Fleck's one-man stage show, I Got the He-Be She-Be's. An exhibit called "Knock Out!," featuring portraits of boxers, appeared in 1988 at the Zero One Gallery in Los Angeles. That same year he was the regular art critic on the cable television series, What's Bubbling Underground, and he guest lectured at the Fashion Institute of Los Angeles. In one of his last stage performances he appeared in The Loves of Edgar Allan Poe with Gronk, Fayette Hauser, Janis Segal and Styles Caldwell at L.A.'s Casa Confetti.
Tomata continued his painting career after moving to Miami's South Beach in 1989. His exhibits—in bars, restaurants and small galleries around the country—were often arranged around a single theme, saluting his favorite poets, TV stars, country/western singers and boxers. Tomata painted people he admired, from historical figures to friends from the punk world, in a style that was emotional, provocative and accessible. He was proud of his status as an outsider artist; he once observed he would rather sell 100 pictures for $25 than one picture for $2,500. In the mid-1990s he moved his studio to New Orleans, Louisiana. Several times a year he would hit the road for exhibits in California, New York and Florida. In January 1999 he appeared in a CNN interview, along with series of paintings featuring Lucille Ball, Elvis Presley and other pop-culture icons.
On August 21, 2000, while in San Francisco, Tomata died of cancer at the age of 52.[9] His remains were cremated, and his ashes were stored at the Hollywood Forever Cemetery, in a crypt at the Chapel Columbarium.
(excerpted from Wikipedia)


This painting was a gift by the artist to my late spouse, John Callahan. John used to recount that Tomata directed John to pick any painting he liked. “I picked this one; I kind of liked it. There was something interesting about his (the character in the portrait) eyes”. 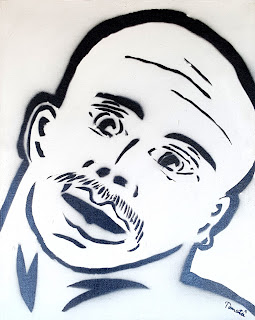 I inherited this watercolor by Tomata from Stuart Timmons after his 2008 stroke. It could well be one of Tomata's early works. 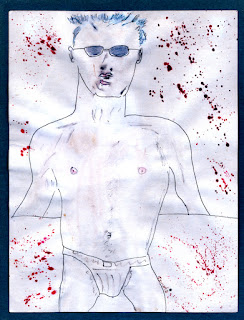 Posted by Brad Rader at 3:43 PM No comments: 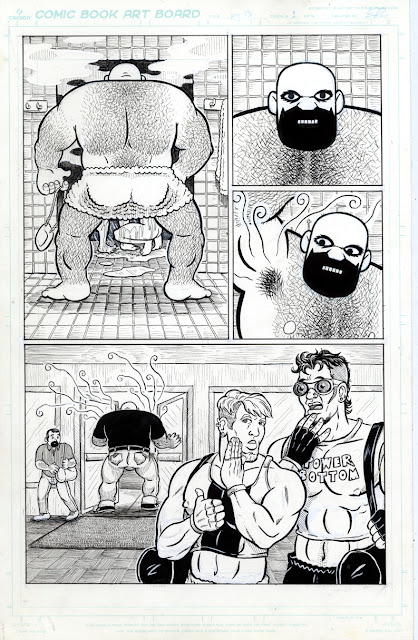 This page is by Ed Luce from his self-published series “Wuvable Oaf” which started in 2008 and was collected as a graphic novel by Fantagraphics in June, 2015. He claims to be influenced by my graphic novel, “Harry and Dickless Tom”. I’ll take his word for it, since he gave this original page (page #13 from issue #1) out of gratitude. Either that, or I bought it from him; I don’t remember which it was. (I didn’t start keeping records of my collection until 2011).
Posted by Brad Rader at 3:35 PM No comments: 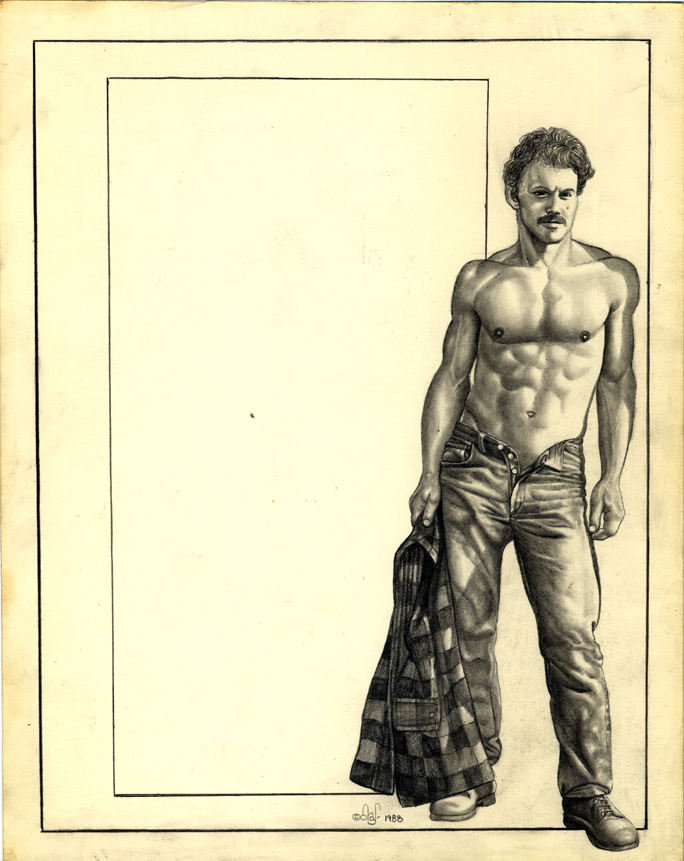 “When I reached puberty I became entranced by what was happening to me sexually and I draw hundreds of drawings of my erect cock. While I had been drawing men since I was five, I now began to draw them with less clothes and more visible genitalia.

“In the seventies, I saw the Satyr as the perfect symbol of gay men in that period In Greek myth, satyrs bring joy and love into the lives of men.

“I praise the beauty of masculine men in my art, of their grace, of the passion of their sexuality. Of the peaks and valleys of their fleshcape. Of their raw power. Of their gentle kindness. Of love between men. Of their hardness of body, the wealth of hair on their chest and bodies, of their sense of comapionship.”

This is a “Torpedo 1936” page by Jordi Bernet, page 3 from the story “Every Dog Has His Day”. This story is anthologized in “Torpedo 1936” Volume 1, published in America in 1984. It’s the first Torpedo story drawn by Bernet after the character’s co-creator, Alex Toth, dropped out after illustrating the first 2 adventures. I purchased this page at the San Diego Comicbook Convention in the late 90’s. Was it Comic-Con International by that time? The dealer I to whom I paid $600 was international, German I believe. I feel I lucked out on this page; it has everything—cool film noire lighting, great spotting of blacks, a beautiful woman in 2 panels, a cool close-up of a gun… But this page fucked me up, in a way, the same way Tony Salmon’s inks on “Lovecraft” did—when I tried to imitate his bravura looseness (I had the original to this page leaning on my drawing board as I tried to ink) when I was inking the Fogtown graphic novel, all I got was crude and crappy. Check out the folds on the back of this guy’s jacket. Mere mortals can’t get away with that kind of inking. 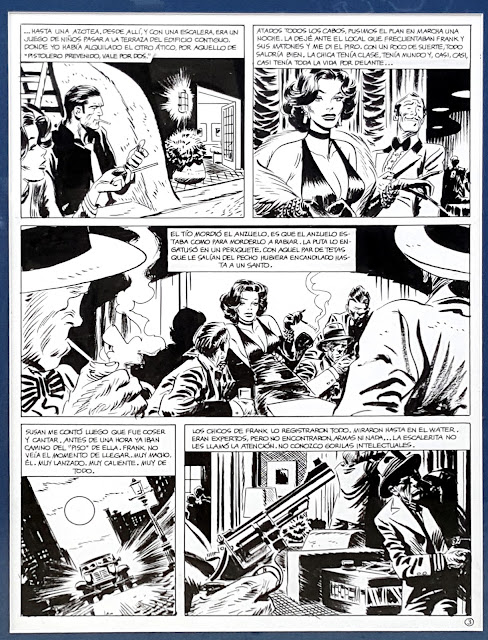 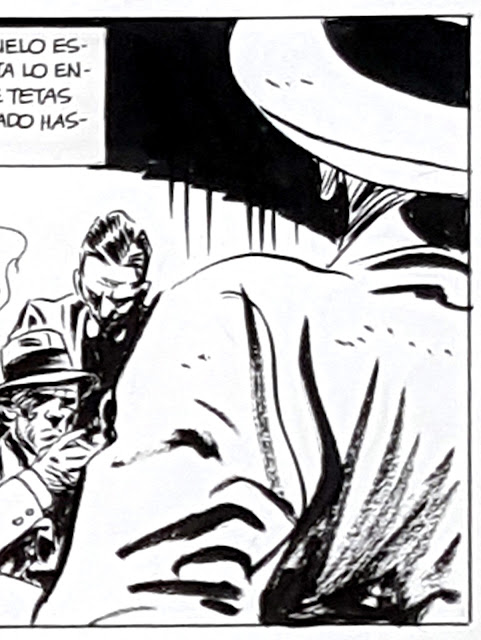 Posted by Brad Rader at 6:40 PM No comments:

Jerry A. Mills ( February 26, 1951[1] - January 28, 1993 ) was a gay cartoonist, noted particularly for his creation of the "Poppers" comic strip. The strip told of the adventures of Billy, a West Hollywood muscleboy, and his sidekick Yves (based on Mills), a big-hearted nebbish who offered good advice and caution (usually unheeded) for his glamorous friend. Yves always went along for the ride with Billy, commenting on the action, a function he took over from a witty crab louse that lived on Billy's pubic hair, when it was phased out after the first few strips.
In the early 1980s Mills worked in the subscriptions department of In Touch for Men, an adult magazine targeted at the gay male community. John Calendo, editor at the time, encouraged Mills to write a regular comic strip, to add variety to the magazine's content. The result, "Poppers", began in April 1982. (The title referred to "poppers", alkyl nitrites which were commonly used in the gay community.) By the mid-80s the strip was also being published ( in translation ) in Gai Pied Hebdo, a French-language gay magazine, and in the Japanese magazine Barazoko. Reprints of the strip also appeared sporadically in Gay Comix under the editorship of Howard Cruse, Robert Triptow, and Andy Mangels.
When Mills moved to the classifieds department of Advocate Men, the "Poppers" strip followed him, and was published sporadically. By the beginning of the 1990s Mills' health was deteriorating, as he developed complications associated with HIV infection, and in his final few years he worked less and less. He did, however, attend ACT UP demonstrations in Los Angeles and design posters for the offshoot organization Queer Nation, concerned with gay visibility. Mills died of his illness in January 1993, survived by his partner Sal Lucarello.


As well as writing "Poppers", Mills also created ad hoc cartoons, and wrote an eight-page history of gays in comics for the first Meatmen anthology. His predominant contribution to gay cartooning, however, was the "Poppers" strip, which was notable at the time for being one of the first cartoon strips to develop gay characters at home both with their sexuality and their humanity. Where earlier comics had tended to the stereotypical - either the nelly queen or the muscleman - Mills was one of the first to present his characters with lives beyond the stereotypes. Though overshadowed by contemporaries, most notably Tim Barela and Howard Cruse, both of whom also worked with continuing characters in comic strip format, Mills made a substantial contribution to gay cartooning. In particular, the "Chelsea Boys" strip by Glen Hanson and Allan Neuwirth is influenced by Mills.
(Quoted from Wikipedia)

I met Jerry in 1988 while a member of ActUp LA (Aids Co-alition To Unleash Power). I thought Jerry was a hoot, the kind of witty party person I wished I were. I watched Pee-Wee's Playhouse for the first time in his West Hollywood apartment.
The original Here on display is huge, about 2.5' x 3.5'. I purchased it directly from the artist in 1992, shortly before his demise.
I vaguely recall a documentary, "Ruined For Life" or something like that, about a Gay Disco in San Francisco in the 70's.Jerry was interviewed in the documentary as he used to run the lights and sound for the disco. 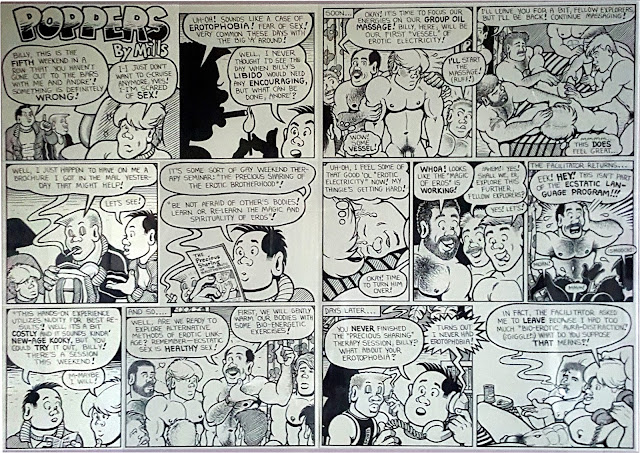 Posted by Brad Rader at 6:47 PM No comments: