More Wonderwoman. It's weird that I like drawing her since I mostly have never read or much enjoyed (when I have) reading her comics. There's something perverse about her whole set-up, and not in a hip, self-aware way like Alan Moore's Supreme comics. I don't know what I'd do with her in the unlikely event that I was given carte blanche to make her over. I think the first thing I'd do is re-visit her brief powerless period in the late 60's -early 70's, when she wore nothing but white and hung out with I Ching. Get some closure on that era since it was ended with extreme unceremonialness by Robert Kanigher when he re-acquired the reins to the character in early '73.
Sigh... Anyway, this drawing is probably incorrect, since I think WW can't actually fly which is why she has the invisible plane. 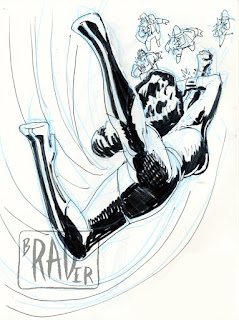